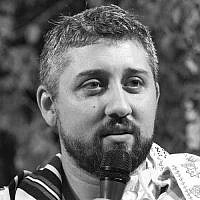 The Blogs
Binyamin D. Minich
#jaffarabbi
Apply for a Blog
Please note that the posts on The Blogs are contributed by third parties. The opinions, facts and any media content in them are presented solely by the authors, and neither The Times of Israel nor its partners assume any responsibility for them. Please contact us in case of abuse. In case of abuse,
Report this post.

Two weeks ago, for the first time in the relatively short history of the State of Israel, the Supreme Court of Israel addressed the issue of the boundaries for the freedom of speech for the state-funded rabbis. The Supreme Justice, Alex Stein, wrote a long 46-pages’ verdict, on the petition of the Israeli Religious Action Center (affiliated with the Israeli Movement for Reform and Progressive Judaism) and some other organizations. These organizations fought for at least last decade against the Chief Rabbi of Tzfat, Rabbi Shmuel Eliyahu. The reason (or maybe it’s more correct to say the reasons) for that was the long list of Rabbi Eliyahu’s public appearances and statements which, according to the IRAC et al, could not be accepted from a rabbi, especially from the one who’s holding an officially state-funded position.

And actually, this is very difficult for me to disagree with this particular petition, because Rabbi Eliyahu, ever since he accepted the position of city chief rabbi, was speaking fiercely on different actual issues and situations, and his style of speech and writing, let’s say, was unacceptable in a decent society. Many groups were targeted in his public lessons and articles as wrong and evil – the non-Jews, especially Israeli and Palestinian Arabs, the secular and liberal-Orthodox Jews, the Reform and Conservative rabbis, the Israeli Defense Forces, the Supreme Court etc. Also, public personalities have got their part – the judges, the police officers, the Chief of the General Staff of the IDF.

One of the most known attacks by Rabbi Eliyahu was the private ‘halakhic’ answer on the question of apartment rental by non-Jews. About ten years ago, Bar Ilan University opened a new faculty of medicine. The State of Israel was desperately in need of one, because of the crucial lack of doctors. But the faculty was not opened in Ramat Gan, but up North, in Galilee (and affiliated with BIU). Of course, it became a very inviting place for local students, many of them – Israeli Arabs. This was the background for the question, addressed to Rabbi Eliyahu. The answer was, unsurprisingly, a total ban on rental any place for non-Jews. It was based on the commandment “lo tehonem” (לא תחונם) which you can find at the book of Exodus (23:33). Its halakhic implication explained at the Babylonian Talmud, tractate Avodah Zarah (list 20a). One of the explanations is that a Jew is not allowed to sell or rent land or house to a person who worships the idols.

So, Rabbi Eliyahu took this commandment (he was not the first, but still) further, to the option, when any non-Jew at the Land of Israel who did not accept the Jewish government and is hostile to it, is included in “lo tehonem”. And, of course, he believes that most of Israeli Arabs see themselves as Palestinians and are hostile to Israel.

According to the verdict of the Supreme Justice Stein, it is not forbidden for a rabbi, to express a halakhic opinion that the Torah prohibits to rent a flat to a gentile. If it was, it would be a violation of both a rabbi’s right to the freedom of speech and his intellectual equity. That could be right, wrote Stein, if we were not talking about a chief city’s rabbi, whose audience is not free to choose to go to another rabbi, since the freedom of speech has also the freedom of ignorance as a part of it. And the citizens of Tzfat are not free to ignore their Chief Rabbi’s words.

Stein also wrote about two problematic styles for a state-funded employee in his public appearances – generalization and personal insult. The previous example is an example of generalization. A speech against, let’s say, Inspector-General of the Israeli Police – is a personal insult, made publicly. Both are not allowed, according to the verdict.

I could not write all these words, if I didn’t have a bottom line. Because, this is not the job of the Supreme Justice Stein to give a moral evaluation, but the judicial one. It leaves to other rabbis to react and to remind a very important point.

Many rules of a life in place surrounded by idol-worshipers in Talmud, were based on a principle of “mipnei darkei shalom” – “for the sake of the paths of peace”. I believe that especially today, in Israel, when we are not “surrounded” but we rule our national state, and we are the majority, this principle has to stand in front of any rabbi or another spiritual leader, we they address an issue connected to our relationships with our non-Jewish neighbors. It’s easy. All the sources are opened. Everyone can easily google any of them.

But the one who deliberately chooses to ignore this principle (at least deny it openly, but don’t ignore!) actually uses the halakha to justify his prejudice. And there’s no intellectual equity in justifying prejudices. There is a definition for a one who uses Torah for the personal benefit, the one who performs moral crimes but does not violates technically the laws of Torah. He is called “naval bireshut haTorah” –  “a scum with the permission of the Torah”. Such person can not be a role model for those who sick to live in peace with Torah and Jewish tradition.

About the Author
Rabbi Binyamin Daniel Minich leads 'Daniel' congregation in Jaffa and works at Daniel Centers for Progressive Judaism in Tel Aviv. He is also a PhD student at the Department of Jewish thought at Bar Ilan University in Ramat Gan. Rabbi Minich is a proud member of the Israeli Council of Progressive Rabbis and the Central Conference of American Rabbis. He serves as a member of Limmud FSU Israel's organizational committee and he is also a member of the board of 'Rabbis for Human Rights'. Benny is married to Elena Minich and together they raise two sons - Hadar Yosef and Levi Moshe.
Related Topics
Related Posts
Comments