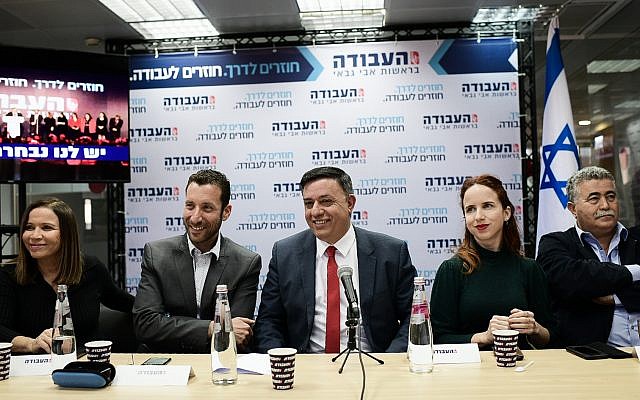 Like train wrecks, cute cats and people falling down, grave political errors draw the eye and seize attention. This is not a thing to be proud of, but it’s part of the human condition nonetheless.

Unlike the other three, political errors are not always clear as they occur. They start off as potential errors. We had two of them in Israel in recent days, in the countdown to April 9.

The more widely discussed has been Benjamin Netanyahu’s effort to ensure supporters of the late ultranationalist Meir Kahane (who favored expulsion of Arabs from the Holy Land) get into the Knesset.

Netanyahu compelled the Jewish Home Party (the current incarnation of the once-respectable National Religious Party) to unite with the Kahanists inter alia by offering it another safe seat on his own Likud list as a prize, which is truly bizarre. Running separately the Kahanists would have drawn some votes but certainly missed the 3.25% electoral threshold. With the race getting close Netanyahu wanted not a single ultranationalist ballot to go to waste.

The political expedient was clear, but he has been tarred and feathered for amorality, including by major US Jewish groups. I share the view that the move was shameful. But most Israeli analysts have also cast it as a political mistake, and of that I’m not so sure.

The gambit might drive away a few voters, and any that go to the center-left Blue & White party, led by Benny Gantz and Yair Lapid, would be lost to Netanyahu’s right-wing bloc; that’s a risk. But it will also save Kahanist votes from going down the drain; that is a certainty. This may and probably will net positive, vote-wise. Success and failure in all things must be judged versus the goal, and if Netanyahu’s was to maximize the vote he may have staged another cynical success.

Of course it looks bad, but does Netanyahu care about the views of US Jews and Israeli ethicists more than about getting reelected? I doubt it. I also doubt the Palestinians themselves see much difference between the Kahanists and other chauvinists  somehow deemed more acceptable (like “lawmaker” Bezalel Smotrich, who seeks segregated maternity wards yet is not as widely considered a disgrace). In any case Netanyahu can always equate between the Kahanists and some of the other side’s more strident Arab associates in the Knesset; it isn’t fair but it’ll work, at least a little, as what-aboutism does.

Much more clear-cut is the shocking error committed by the Labor Party’s error-prone leader Avi Gabbay. Gabbay engineered the party’s mindless decision to reject union with the slightly-more-leftist Meretz last Thursday, as the clock wound down to hand in candidate lists. In spurning Meretz’s proposal he might have inadvertently handed Netanyahu the election.

To understand why, we must remember the nature of the Israeli electoral system. Pretty much the only thing that matters is which of the two blocs gets 61 seats out of the 120: the right composed of Likud plus its nationalist and religious satellite parties — or everyone else. This latter group has been called the “left” but now prefers “center-left” — both because there is a distinction between the two components, and because soft-right voters can’t stand the left.

The non-right also currently includes 13 seats from Arab parties that complicate the equation by both refusing to serve in center-left governments (this has to do with whether one is a Zionist; long story) and being shunned by them. As a result when the non-right wins it governs by drawing in a few religious factions left with no place else to go (except the opposition, where they cannot organize quite the same funding for seminaries without a core curriculum of science, math and English). So it was in 1992, 1999 and 2006, the last times the non-right won elections.

And it has never worked out differently. For example, in 2009 the non-right lost the overall vote but its anchor party Kadima (which some will see as the previous incarnation of Blue & White) outpolled Likud by one seat. Kadima leader Tzipi Livni celebrated “victory” but Netanyahu became prime minister anyway. A decade later Israel stands with its democratic institutions badly bruised and the two-state solution on life-support, because choices have consequences.

The calls to unite Labor and Meretz were driven by the desire to eliminate any possibility that Meretz fails to make the electoral threshold and its votes are lost to the center-left. The latest poll today shows a 60-60 bloc split. The center-left certainly cannot afford the loss of around 6% of its vote (3% of the overall vote), which is probably the minimum Meretz will get no matter what. Preventing that scenario is, indeed, the same logic that compelled Netanyahu to risk what’s left of his international standing by rushing to save the Kahanists.

Gabbay reasoned that a union of Labor and Meretz might get fewer votes than the parties could muster running separately, and that might well be true.  Today’s poll shows Labor winning 9 seats and Meretz on the cusp with the minimal 4. I agree a combined list might have won not 13 seats but perhaps 11. The hard-left label Meretz brings with it (they want universal human rights and still believe in the Palestinian partner) might have driven some voters rightward to Gantz and Lapid. But these would have stayed within the bloc. Having chosen to run separately Labor might have preserved for itself another seat or two, but what on earth does it matter, if the result is that seats critical for the bloc are lost and so the right stays in power?

Ah, yes; political mistakes. They are not unique to Israel.

In 2016, both major US political parties erred in their choice of candidates for president, for different reasons. Hillary Clinton would have made a plausible president but was a disastrous candidate in ways that should have been completely clear. Donald Trump was a formidable candidate, but I doubt the Republican Party will look back upon his time in office with pride.

The Democrats have been on emergency footing ever since that ill-fated vote, awaiting the next disaster, unhappy with the world and exposed to an insurrection of their own. Mainstream Republicans with a conscience must contemplate their role in America’s excruciating decline, accept that their base will back the most outlandish things, and suffer no little disrepute.  There were consequences to the mistakes.

We will know the consequences of the Labor Party’s selfish and shortsighted decision on April 9. To begin with, at least some will feel that Labor must be punished and the backlash could cut into the party’s current level of support (although I do not think they will get to the point of being in danger of not getting in).  More importantly, if Likud stays in power because Meretz failed to get into the Knesset, almost no one will care how many seats the Labor Party won – including Gabbay himself. That’s because the Labor Party will dump him faster than you can say “Meir Kahane.”