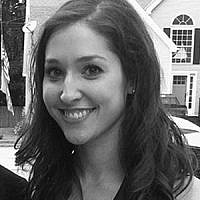 The Blogs
Emily Hochberg
Apply for a Blog
Advertisement
Please note that the posts on The Blogs are contributed by third parties. The opinions, facts and any media content in them are presented solely by the authors, and neither The Times of Israel nor its partners assume any responsibility for them. Please contact us in case of abuse. In case of abuse,
Report this post.

Love it or hate it, the largely-for-selfie mobile app Snapchat is a wonderful way to keep in touch with loved ones, both near and far.

A recent shot I received was of my cousin and his wife and their two young girls, posed in a family embrace.

Another cousin sent a picture with her newlywed husband.

Another cousin showed me a darkened shot of him standing amongst all his work colleagues.

These seem innocuous enough. But sadly, they are not. All of these pictures depict Israelis standing in bomb shelters as yet another rocket soars overhead from Gaza.

In the first, the two girls were in their pajamas, playing in a safe room when they should have been in bed. My newlywed cousins went to sleep in their shelter clothes so that they could make it to safety in the 15 short seconds a siren affords. My other cousin was at work, trying to go about his regular day, when terrorist fire intervened and he found himself huddled in a stairwell instead.

And these are not one-off instances. Over the course of just seven days, since the beginning of Operation Protective Edge, six million Israelis have had to find shelter over 1,300 times. That’s the equivalent of 250 Million North Americans. This is daily life. What an impossibly frightening way to live.

This is not to say that life in Gaza right now is tolerable. There has been death and injury, and as someone who seeks a peaceful, negotiated resolution to the Israeli-Palestinian conflict, I mourn the loss of life on both sides.

However, the death toll keeps climbing in Gaza because Hamas perpetuates it.

Hamas is an internationally-recognized terror organization that boasts a charter calling for the destruction of Israel. It engages in war crimes and displays reckless disregard for human life. While the Israel Defense Forces (IDF) does everything in its power to avoid civilian casualties, Hamas encourages the exact opposite. It uses Palestinian civilians as human shields, placing them directly in the line of fire, in order to increase the casualties. Then it cynically capitalizes on the carnage to advance its propaganda war against Israel.

The Hamas terrorists use private residences and civic buildings for military purposes, storing weapons in them. They deliberately position rocket launchers, weapons stores, and command and control centers, in, near or under homes, schools, hospitals and mosques, leaving Palestinian civilians intentionally exposed.

Even the Palestinian delegate to the United Nations Human Rights Council, Ibrahim Khreisheh, told a Palestinian Authority TV outlet that Hamas “rockets aimed at Israeli civilians are crimes against humanity – every rocket, individually, whether or not it hits anybody.” He further elaborated that because Palestinians in Gaza receive warnings from Israel before an airstrike (a courtesy not extended by Hamas to Israelis), any resulting fatalities are accidental and not criminal.
Those warnings include dropping pamphlets, phone calls and text messages alerting civilians to vacate targeted locations, and detonating unexploded shells on roof tops (the knock on the door). Hamas meanwhile instructs its citizens to ignore these calls, or sometimes prevents them from leaving.

Where Israel shows restraint, often calling off airstrikes if Palestinian civilians are at risk, Hamas’ ambition is to randomly kill as many Israelis as possible.

Despite this reality, Hamas has been partly successful in waging a campaign of misinformation.

It is therefore our duty at this critical point, not only to stand in support of Israel’s fundamental right of self defense, but also to set the record straight.

Over 13,000 rockets and mortars have been indiscriminately fired at Israel’s towns and cities ever since Israel withdrew unilaterally from the Gaza Strip in 2005. The Iron Dome anti-missile system, developed with critical assistance from the United States, intercepts many of those missiles before they land, which is why, thankfully, there have been few Israeli deaths.

So why do some still question Israel’s motives? What government would tolerate a situation in which 75% of its population was being attacked? Just as in any other country, Israel’s government has the inalienable right – indeed the obligation — to defend its citizens from terror.

This is why IDF launched Operation Protective Edge, to target Hamas’ terrorist infrastructure in Gaza and restore security, while seeking to minimize casualties on both sides.

The Israeli people have long shown a willingness to make difficult compromises to end the conflict. Israel has successfully negotiated peace accords with Egypt and Jordan, withdrawn completely from the Gaza Strip, and twice offered the Palestinians a state of their own, yet peace remains elusive. While this is a complicated issue for many reasons, there is one item that can be rectified immediately in order to move both parties closer to peace: cease the rocket fire from Gaza.

Earlier this week Israel agreed to an Egyptian-proposed ceasefire supported by the United States, the Quartet, Palestinian Authority and the Arab League, yet Hamas rejected it. It is clear that when Hamas stops firing on innocent Israelis and adheres to a ceasefire, Israel will halt its operation and calm may be restored for both peoples.

And my cousins, as well as their Palestinian neighbors, can go back to their regular lives, where a selfie is once again, a self-indulgent selfie, and not a representation of a greater painful conflict.

About the Author
Emily Hochberg is currently the Director of Communications and Social Media for the Israel Action Network, a strategic project of The Jewish Federations of North America in partnership with the Jewish Council for Public Affairs, created to counter assaults made on Israel's legitimacy. Emily is also a writer who has earned bylines in People Magazine, MTV.com, Buzzfeed, xfinity.com, The Jerusalem Post, and many others. Follow her online at @EmilyHochberg.
Related Topics
Related Posts
Comments