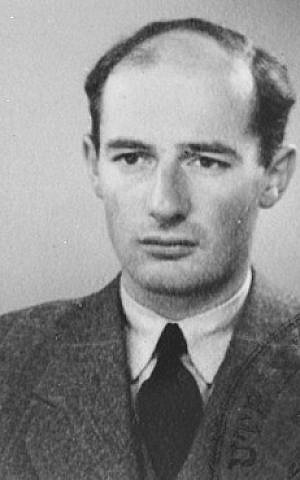 Raoul Wallenberg lives in my heart every single day of the year, but especially on 4th of August, the day of his birth. This year, we celebrate the 110th birthday of this remarkable human being

Wallenberg’s feats have been extensively described by historians and researchers, including in my last blog of January 2022, on occasion of the 77th anniversary of his tragic and mysterious disappearance.

Ironically, the young Swede who was able to save tens of thousands of innocent lives in Hungary during the Holocaust, ended-up abducted and most likely murdered by the Stalinist regime.

Amongst the many Jews he saved were the late Tommy Lapid (Josef Thomas Lampel) and his mother, Katherina. Both of them received his life-protecting Schutzpasses (Swedish Certificates designed by Wallenberg) and Katherina was even personally saved by the Swede after having been rounded-up by the Hungarian Nazis on her way to Auschwitz. Tommy Lapid was a young boy then, but he vividly remembered what Wallenberg had done for him and his mother.

I had the pleasure of meeting Lapid in person and our NGO; the International Raoul Wallenberg Foundation had the privilege of having him as an Honorary Member. He was deeply grateful to his rescuer and acknowledged the fact that Israel had done very little to save him.  As per his own words: “Israel was fighting for its own survival and on top of that, the Shoah survivors were trying to forget their tragic plight during the war“.

On the other hand, the lukewarm and indifferent stance of the successive Swedish governments, which did very little to extricate Raoul from the Soviet Gulag, is inexplicable. The same can be said about Raoul’s powerful and influential family, owner of one of the largest economic concerns in Sweden, not only during WWII but even today. During the war, the Wallenbergs dealt with both Allies and Nazis, providing the belligerent parties with raw materials for their war efforts, cashing enormous sums of money while Raoul was literally risking his life in Budapest in an effort to save as many lives as possible.

A few days ago I was reminded of this beautiful story as I received a moving letter from Prime Minister Lapid ahead of Raoul Wallenberg’s upcoming birthday.

Back in October 2021, when Mr. Lapid hosted his Swedish counterpart, Foreign Minister Anne Linde. On that occasion, his guest surprised him by handing over to him a copy of the page in Raoul Wallenberg’s diary where the Swedish diplomat entered the names of Lapid’s father and grandmother as recipients of his life-protecting Schutzpass. Lapid was overwhelmed with emotion and promised his host to frame the historical document and keep it in his office. 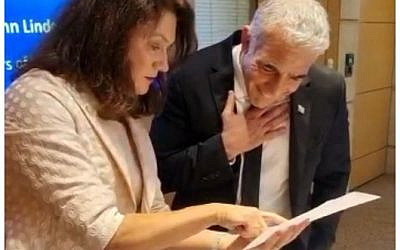 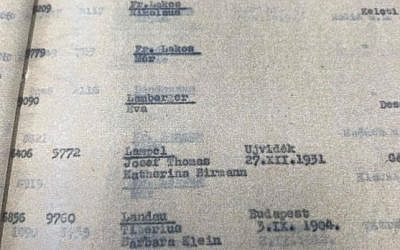 Wallenberg’s diary featuring the names of Tommy Lapid and his mother. (Alon Ushpiz/Twitter)

Sometimes, history carries a great deal of symbolism.  The grandson and son of two human beings that were saved by Wallenberg some eight decades earlier, has become the Prime Minister of the Jewish state.

To be sure, Raoul Wallenberg saved tens of thousands of innocent lives, but indirectly he also saved many more lives if we count  their descendants. As Mr. Lapid rightly mentions in his letter: “Had it not been for Raoul Wallenberg and his courageous and selfless actions, many people would not be here today – including myself.”

For many years now, the Wallenberg Foundation has been striving to get reliable answers into the fate and whereabouts of Raoul Wallenberg and his aide, Vilmos Langfelder (who was also abducted with him). We have sent countless letters to the Russian authorities asking for an unfettered access to the KGB archives, as we firmly believe they could shed light and bring closure to this tragedy. Alas, the Russian Federation remains unresponsive.

I know Prime Minister Lapid is truly grateful to Raoul Wallenberg and I hope his gratitude will be an incentive for him to use his political influence  to help resolve the mystery surrounding Raoul Wallenberg’s disappearance.

Raoul’s closest family has paid a heavy toll. His mother Mae and his beloved step-father, Fredrik von Dardel, took their own lives as an act of despair for their inability to bring their beloved son back home.

Our NGO has worked closely with Raoul’s half-siblings, Prof. Guy von Dardel and Nina Lagergren who, regrettably, passed away without being able to fulfill their dream to reunite with their half-brother.

Almost 80 years have elapsed from Raoul’s awe-inspiring life-saving feats, but gratitude has no date of expiration.

We should all do our utmost to keep alive the legacy of this hero and continue our relentless struggle to resolve his personal tragedy.

About the Author
Baruch was born in 1933 in Las Palmeras, Argentina, a little hamlet which was part of Baron Hirsch's Jewish settlements. He graduated from a Yeshiva and spent his first adult years teaching Judaism. In the 1960's Baruch was Director of the Israeli Tourist Office in Argentina, creating a program for Catholic pilgrims. He has founded two NGO's, Casa Argentina in Israel - Terra Santa and the International Raoul Wallenberg Foundation. He is married, has three children, six grandchildren and two great-grandchildren.
Related Topics
Related Posts