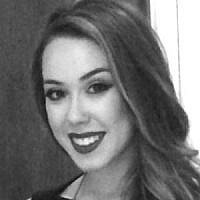 The Blogs
Kailee Jordan
Apply for a Blog
Advertisement
Please note that the posts on The Blogs are contributed by third parties. The opinions, facts and any media content in them are presented solely by the authors, and neither The Times of Israel nor its partners assume any responsibility for them. Please contact us in case of abuse. In case of abuse,
Report this post.

In this world today, there are 10 countries that enforce the death penalty for homosexuality, not including the countries that prosecute people for being gay. This includes decapitation, stoning, imprisonment, and flogging for being charged in relation to homosexuality. Between 1979 and 1990 there were 107 recorded executions related to homosexuality in Iran according to the Boroumand Foundation. In 2000, the Saudi Arabian government sentenced 100 men to prison and lashing for attending a same sex wedding celebration. In Saudi Arabia, Iran, Mauritania, Sudan, Yemen, Somalia, United Arab Emirates, and parts of Nigeria and Malaysia homosexuality continues to be criminalized by the government and those who are convicted are punished by death.

LGBTQ people also among those who are publically executed by ISIS and Hezbollah where these public execution of gays can be viewed via Internet.

As Middle Eastern countries like this continue this judicial system, the Middle East remains a hostile atmosphere for homosexual people. This causes some people to become in a sense homosexual refugees who flee death, persecution, physical humiliation, and brutal physical punishment.

To better illustrate the life of a gay person who comes from one of these countries, I had the experience to interview Sadiq, (last name withheld for personal security) who is a gay man that moved to San Francisco from Saudi Arabia to seek freedom. He now goes to school in San Francisco and works in the Castro as an open gay man. In Saudi Arabia, when his family found out he was gay they gained a negative reputation in the town they lived in and Sadiq was then adopted by his cousin. Due to the difficult consequences of his lifestyle, he made his way to the US and became and student in San Francisco.

“You cannot hold hands in public with another man in Saudi [he laughs when I ask that question] of course they will throw you into jail. If you are gay, you don’t tell people you are gay and you don’t discuss it with people. Your life is closed. You’re a criminal. If your family knows you are gay, depending on the family, they will either hide it or shame you for fear of public reaction and consequence.”

When I asked him about the stigma of homosexuality in his home country, he responded:

“It’s not so much the culture that’s the problem, it’s the religion. Religious principles are the governing power in Saudi so its embedded into morals of the culture. When people think of right and wrong they automatically sort homosexuality as being wrong. I myself am even inclined to think this way.”

I then asked him how it felt to be in the political position of a homosexual person in Saudi Arabia, as opposed to a democratic country like America.

“For certain reasons I like Saudi and for certain reasons I like America. They both have their negatives and positives. I miss my family in Saudi, I think where the people you love are is the place you are going to be more comfortable. In Saudi I cannot be a gay person openly. I knew that being gay was wrong, and I tried to be with a girl but I just didn’t like it. In America it is very different. Gay life in Saudi is very quiet and undercover. Men and Women are not allowed to talk to each other unless they are married so it was still manageable to be gay because men were always around each other. In America, there are gay bars, nightlife, and Gay life is very loud and I’m not quite used to it yet. I’m not used to being able to be so open and free, it’s something I’ve never experienced before”.

Sadiq then explained to me that he doesn’t agree with the stigmas that are placed on Homosexuality in the culture he comes from. He elaborates on the complications of his sexual identity to his lifestyle.

“When I was living in Saudi, I felt guilty. I felt guilt for what I was doing. I could not justify my actions because I also felt what I was doing wrong. But now that I am living here I can be real and be myself, along with other gay men like me. I want to go back to Saudi, but I cant because of the life I live.”

As this societal stigma against homosexuality and governmental persecution of gays continue in Middle Eastern countries, Israel, serves as an even bigger purpose for people who are able to live in a country in the Middle East where their rights are protected.

This is a graph that is shown in Dr. Carrington’s class at SFSU on Gay rights around the world. Taken with data from the 2007-2013 Pew Global attitudes project, we see that out of all the countries in the Middle East, Homosexuality is most accepted in Israel. 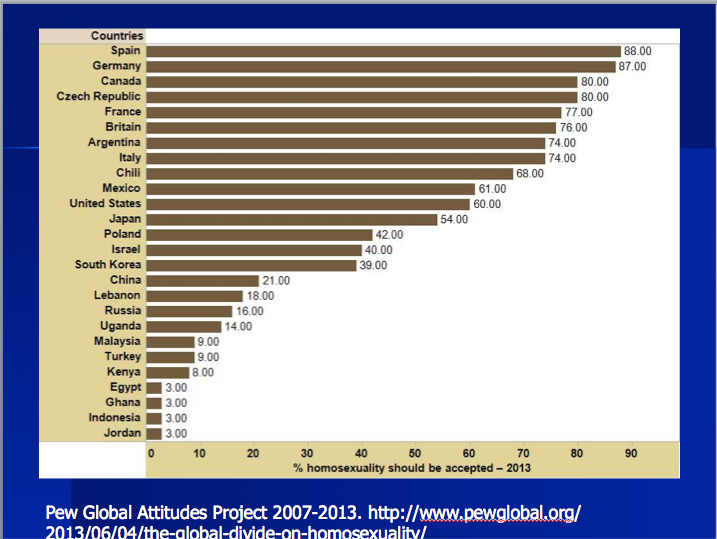 Israel is not only the one country in the middle east that does not persecute gays, but the one democracy in the Middle East where Gay men and women are equal citizens who can vote, participate in government, and walk the streets holding their partners hand without being stoned to death or persecuted. Liberal societies like Israel play a vital role for Gay Rights in the Middle East. Among 27 countries that prosecute homosexuality in the Middle East, Israel, a country the size of Rhode Island, is championing that cause making it possible for gay freedom to have a presence in the midst of the darkness.

Like Sadiq’s experience in America, being free and open about his identity is something that is valuable and rare to people of his origin. In America, a liberal democratic society like Israel, he is able to be free and live a life he was conditioned to hide. It is so important that places like America exist for him so he can have this experience and live a normal life as a free man.

Israel is not perfect, nor never will be. But as a society where gays can live free and enjoy equal rights serves as a huge importance for humanity and progression in the region. Refugees from Morocco, Iraq, Iran, Syria, and other countries are now able to experience the same kind of freedom Sadiq experienced when he moved to America. Israel is and always will be a democracy with Jewish morals, a beacon of social justice, and a place where religious freedom, sexual freedom, and political freedom