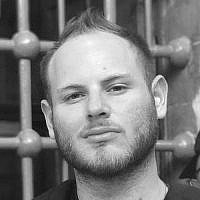 The Blogs
Aaron Raimi
Jewish Rights Activist, Writer, and Zionist
Apply for a Blog
Please note that the posts on The Blogs are contributed by third parties. The opinions, facts and any media content in them are presented solely by the authors, and neither The Times of Israel nor its partners assume any responsibility for them. Please contact us in case of abuse. In case of abuse,
Report this post.

A Bernie Sanders nomination and/or presidency will serve as a litmus test for what side of the Jewish spectrum you fall on. This might sound foolish to a Jew as there is much diversity in the Jewish community, from ideological and religious diversity to ethnic and political. But the fault line at which Jews stand is how they view their Jewishness and their identity.

The cliché of 2 Jews, 3 opinions is not mirrored in this singular black and white dichotomy of Jewish identity – universal vs. national. As with many concepts in Judaism, there always stands a dueling nature of ideas and multiple interpretations of those ideas. But the main paradox in Judaism is its adherence to a nation that simultaneously strives for universal ideas for the goodness of humanity. This paradoxical relationship is mirrored in Jewish concepts such as or la goyim (light unto the nations) and tikkun olam (repair the world). Both concepts derive from the idea that the nation of Am Yisrael, the Jewish people, serve and strive to be a bastion of goodness and light for the rest of the world, and to spread that light and goodness in order to make the world more G-dly, and morally and spiritually elevated. But both concepts are also predicated on the idea of a unified Jewish people, a collective nation that strives for Ahavat Yisrael (love a fellow Jew as yourself) and seeks to be one people, one tribe, and one nation. Without strong Jewish unity as one nation, these concepts are essentially null and void.

But these concepts that are both universal and national, or worldly and particular, or global and tribal, have been at the heart of Jewish political division for the past 130 years and even longer in some regard. This division has taken place in dueling revolutions in the late 19th and early 20th centuries.  The fate of European Jewry (and eventually World Jewry in the case of Zionism) led to the revolutionary movements of  Bolshevism/Communism vs. Zionism, whereas the former was universalist, Yiddishite Bundists, and the latter were nationalist, Hebrew-speaking Zionists. The two revolutions magnified the universal vs. national split and were two visions of what Jewish identity was and would be in the future. And the rise of Bernie Sanders and the manifestation of his worldview through his view of Jewish identity highlights that division so succinctly that it will serve as a very black and white view of how American Jews see themselves.

In the eyes of Bernie Sanders and his Jewish supporters, their Jewishness is strictly universal without any room for nationalist sympathies or tribal loyalty. The concept of tikkun olam which is obsolete if there is not Jewish unity is at the heart of the Bernie Jew. For a Bernie Jew, tikkun olam is not predicated on the need for a strong Jewish nation to heal and repair the world. The healing and repairing of the world are at the heart of being a Jew. The manifestation of this concept for Bernie Jews is a universalist, secular, humanist political ideology that stands in diametric opposition to observant/orthodox Judaism, Zionism, and G-d-centered religion. The Bernie Jew believes that the messiah and proceeding utopia that is presented in the Torah is at best a foolish idea. The real utopia can be constructed through man-made means, that humanity alone can bring about peace, justice, and end human suffering. This is the mindset of the universalist Jew – the Jew who interprets Jewish concepts devoid of any national aspirations.

This mindset is what provides the ground for a Jew like Bernie to be outspoken about his Jewishness when it is for a human cause rather than a Jewish cause – universal healthcare, open immigration, free college, and equal distribution of wealth.

The focus on Jewishness as a universal mindset rather than an ethnic, religious, nationalist, and cultural identity enables different views on anti-Semitism. Whereas in the case of a universalist Jew, the Jewish state does not represent the Jewish people and an anti-Semite only takes one ideological and physical form in the case of white supremacist neo-Nazis, the nationalist Jew takes great offense to the tropes and rhetoric used by Bernie’s surrogates and supporters about Jews and the Jewish state. Linda Sarsour, Ilhan Omar, Rashida Thalib, Louis Farrakhan, John Cusack, Faiz Shakir, and Matt Duss frighten many Jews, particularly the more nationalist ones, just as Richard Spencer, Steve King, David Duke, Rick Wiles, and the entire cabal of basement-dwelling alt-right Nazis do.

Divergent views on anti-Semitism amongst pro and anti-Bernie Jews can also be attributed to upbringing and background. Bernie Jews are almost exclusively Ashkenazi, secular, and grew up sheltered from frequent, viscous, and violent anti-Semitism due to non-visible Jewish markers and assimilation. Anti-bernie Jews are a mix of Ashkenazi, Sephardi, and Mizrahi, and mostly grew up in traditional, non-secular Jewish households and did not have the privilege of non-existent Jew-hatred due to visibly Jewish indicators (kippot, tzit tzit, tzinut/modest dress), or going to school with very few Jews, or experiencing anti-Semitism from someone who was not a white supremacist or right-wing.

Bernie’s controversial surrogates and supporters and his track record or lack thereof in Jewish causes and problems provides a level of bewilderment and outrage to a majority of American Jews when he claims that he is a “proud Jew”, or when he says that he will not speak at AIPAC  due to its “bigotry” and “hatred”, when it is the heartbeat of politically-minded American Jews both on the left and right. When the unifying rallying cry for Jews regardless of political, ethnic, or religious affiliation was to free Soviet Jewry in the 1980s due to persecution and outlawing of practicing Judaism, Bernie took a trip to the USSR in 1989 which he described as “a very strange honeymoon”, and did not use his platform to advocate against the persecution of Soviet Jews, and instead he maligned American foreign policy and made a moral equivalency between the former and that of the USSR’s foreign policy.

Bernie hasn’t been an outspoken voice as a public servant with a large platform about the Crown Heights riots in the 90s, the recent uptick in anti-Semitic attacks (other than a couple tweets), the mainstreaming of anti-Semitic rhetoric in the halls of Congress, his controversial campaign advisers and surrogates, or the ever-growing fears and alienation that Jewish students experience in universities throughout the country. One would be hard-pressed to find a person who wouldn’t call Bernie Sanders outspoken on controversial issues and problems, so the sudden “proud Jew” label that Bernie likes to champion minus his lack of outspokenness on controversial issues and problems that affect Jews strikes many as dubious at best and sinister at worst, especially the nationalist-inclined Jews.

The anti-Bernie Jew views their Jewishness in the national sense – a sense of peoplehood that is held together by a common land, bible, G-d, and tribal identity. The anti-Bernie Jew manifests their identity through their Zionism, attachment to Israel, attendance to Synagogue, observance of halacha and Judaism, and political support of moderate candidates that are both on the right and left. And while many anti-Bernie Jews maintain various levels of universalism to their Jewish identity, the nationalist part outweighs it, especially in relation to a Bernie Jew that is purely universal.

The nationalist sentiment in the anti-Bernie Jew is not derived in any way by some sort of racial supremacy, or nativist particularism, or a “real Jew” litmus test, but rather a shared history, tradition, culture, and land with elements of mutual identity and genealogy – a true nation or peoplehood much like other indigenous peoples. This nationalist sentiment leads the anti-Bernie Jew to be weary of any political candidate that embraces a hardcore political ideology, whether it be xenophobic-tinged, nativist ethnic supremacy from the right or morally pure, “real Marxism” (i.e. being sufficiently woke enough) from the left, both of which exacerbate societal divisions and problems and has resulted far too many times as Jews being the scapegoat for said problems. The nationalist Jew knows that extremist political ideologues from both ends of the spectrum will distort that sense of Jewish peoplehood as something nefarious to magnify populist outrage at the system’s problems, and then blame the Jews as the main cause of the system’s problems.

The nationalist, anti-Bernie Jew views their Jewishness as a member of a particular tribe with a duty to improve the world for their tribe and the world, not as one detached individual part of a global collective with no ethnic, religious, or cultural identity. The anti-Bernie Jew values are steeped in family, tradition, nation, community, G-d, and goodwill or mitzvot for others through private or religious means, rather than political or governmental.

The anti-Bernie Jew does not place a political agenda before the goodwill of their people; anti-Semitism in all its forms from any race, religion, or political ideology is unacceptable and may not be excused whether it is from their political allies or enemies. Unlike the universalist Jew, the nationalist Jew knows not to be too enamored, secure, or safe with one political party or simplistic ideological worldview because at the end of the day, they know that history has proven that sense of security and safety to be an illusion. The anti-Bernie Jew knows no amount of hiding their Jewishness or apologizing for it will appease the anti-Semites in their political camp, and instead choose to be strong and passionate about it, something that many nationalist-oriented Jews feel Bernie has done too much of the former and not the latter.

Without leaving out context, a Jew does not have to view Judaism as strictly national or universal, but in the case of Bernie Sanders, that choice is almost impossible. In an ideal world, there wouldn’t be a polarizing Jewish candidate running for President who only views his Jewish identity from a singular universalist lens. In that ideal world, Jews view their identity (and most Jews already do) as having elements of both national and universal that don’t have to be in opposition with one another, rather a complex harmony of both that doesn’t have to be a zero-sum choice. But with Bernie’s full-scale embrace of universalist, socialist ideals, combined with his surrogates who many Jews view as anti-Semitic, and his you’re with us or against us revolutionary rhetoric, American Jews will have to choose which side of Jewish tug-a-war they’re on.

About the Author
Born in San Diego, Aaron Raimi is a Zionist and Jewish rights activist and current student at Santa Monica College majoring in Political Science. Having previously attended UCSB, Aaron was a Hasbara Fellow there and advocated for Israel and the Jewish people while defending the Jewish state from ideological and academic warfare in the form of BDS and anti-Zionist Professors and students. Aaron's long-term vision for Jewish activism on campus is to change the paradigm in which Zionism is viewed from a negative to a positive, and Jewish students to proudly embrace their identity, culture, and history.
Related Topics
Related Posts
Comments