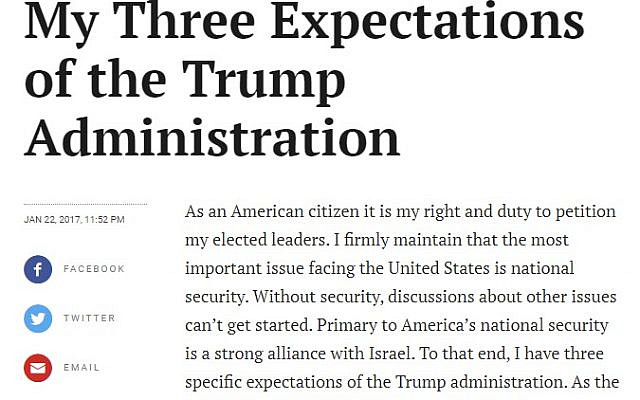 1) A healthy and productive relationship with Israel
It can be argued that the Trump administration developed the healthiest and most productive of any relationship with Israel of any administration before it. In this section I listed the following specifics:
a) President Trump should go out of his way to show that the US-Israel relationship is strong. 100%
b) He should meet often with Prime Minister Netanyahu and treat him with respect. 100%
c) No longer should America have daylight between it and its allies, while bringing its enemies closer. 100%
d) The memorandum of understanding signed between President Obama and Prime Minister Netanyahu should be rewritten with the provisions unfavorable to Israel removed. 0%
e) This would include no longer requiring Israel to spend 100% of American aid in America, but reverting back to the Bush agreement which required a 75/25 split. 0%
f) Money for missile defense would not have to be included in the annual aid package and Israel would be allowed to ask for more aid if it required it. 65%
g) Israel’s qualitative military edge should be maintained and military and intelligence cooperation should be extended even past the high levels of the past eight years. 90%
h) President Trump should continue the longstanding tradition of defending Israel at the United Nations. 100%
i) If there are disagreements between the two countries they should be expressed directly and privately between the two countries, not through press leaks, State department briefings, or any other public forum. 80%
j) President Trump should quickly announce and begin moving the American Embassy in Israel to Jerusalem. 100%
k) Along with the move should come an official policy change that barring an Israeli change in policy, America stands behind Israel’s position that an undivided Jerusalem is its Capital. 100%

2) Iran
a) Iran must be warned that its sponsorship of terror, ballistic missile testing, harassment of US naval ships, and human rights abuses must come to an immediate end or harsher sanctions will be imposed. 85%
b) Included in this warning must be a warning to Iran sponsored Hezbollah to disarm in accordance with UN resolution 1701. 30%
c) Any sort of nuclear weapons activity, even if only by suspicion will not be tolerated and will be seen as a breach of the Iran deal. 100%
It should be noted, I didn’t even expect the President to pull out of the Iran deal. He did, far surpassing my expectations.

After four years in the White House managing the U.S.-Israel relationship The President and his administration met most expectations and surpassed many more. I’m not saying that your vote should depend completely on the President’s performance on Israel. I’m also not saying that my perspective is the only one to consider or that you have to agree with my conclusions. This high grade doesn’t mean the President automatically deserves your vote or that I’m endorsing him for President. This was one assignment that the President and his team scored exceedingly well.

Trump critics will disagree with my assessment. They will list many policies and outcomes they think were ill-advised and weakened Israel and the U.S.-Israel relationship. They maintain that Israel will only be safe pursuing a two state solution and the President alienated the Palestinians. They thought the Iran deal was the only way to ensure Iran didn’t go nuclear and the President’s withdrawal from the deal is bringing Iran closer to a nuclear weapon. I don’t agree with those positions but as I say in my classroom, I’m the teacher and I get to fill out the report card. In a democracy every citizen gets to fill out their own report card. Now’s the time to fill out yours.