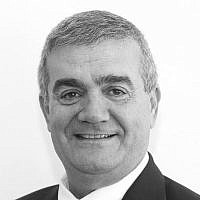 The Blogs
Jehuda Haddad
Apply for a Blog
Advertisement
Please note that the posts on The Blogs are contributed by third parties. The opinions, facts and any media content in them are presented solely by the authors, and neither The Times of Israel nor its partners assume any responsibility for them. Please contact us in case of abuse. In case of abuse,
Report this post.

The crying need to develop the empty Negev on the one hand and to make available valuable and expensive land on the other hand, justifies the urgent move of the Intelligence army bases to the Negev, while disregarding the threats and warnings of a handful of skeptical intelligence officers.

Barely several minutes after the historic moment in which the Amir Eshel, Director-General of the Defense Ministry, and Tamir Cohen, Chairperson of Shikun & Binui, signed the agreement to transfer the intelligence bases to the Negev– the anger of the “mouthpieces” of “senior intelligence officers” was upon us.

As if the tempting offers do not already await them when they serve in Pi Glilot, in the heart of the most expensive and sought after land in the center of the country. As if we do not know who comprises that small and self-interested group spinning the wheels of opposition to this plan. By the way, most of them will no longer serve in mandatory service when the first intelligence soldier who will serve in Likit will set foot in the new base in the Negev.

“I ask you to treat the new base and what is required in terms of the high technological level that will characterize it as if it is a base operating in 2050. No less…” said the Chief of Staff, Lieutenant General Aviv Kochavi, as he turned his gaze to the chairperson of the company awarded the concession (Shikun & Binui) which will begin to build the base.

And indeed, the intelligence base that will be built in the coming years on lands in Likit in the Negev will be the dernier cri in groundbreaking technologies, even according to 8200 Unit standards. No longer an old army base with outmoded equipment and buildings dating back 70 years or more. Besides the professional quality, a quick glance at the construction plans showcases quite a large cyber and innovation campus, sophisticated, green managed, with pampering service, work and living conditions, that will serve as a suitable home for the best minds in our country.

And no, even now, not all the experienced permanent service soldiers are easily tempted by outside offers. Only a small number. The others value the national and military mission, excellent service conditions, amazing pension conditions, and especially – serving on a base that will undoubtedly be the IDF’s most modern and high-quality base. With the planned rapid train (which has already been budgeted), in most cases they will reach the base much faster than they do today.

As noted, the IDF and the Intelligence Directorate are already laying the groundwork for the new age. The school for the children of Intelligence personnel that is about to open in the Ramot neighborhood, and the investment of hundreds of millions of shekels to upgrade the education systems and cyber studies, mathematics at a 5-unit matriculation level, languages relevant to the position and more. Everything is ready for the missions that will be assigned to the Intelligence Directorate in the coming decade.

There are intelligent, sophisticated and quick-responding youth throughout the Negev who will do their duty in meeting the needs of the elite units and will do so just as well as their peers from metropolitan Tel Aviv or the north.

The Negev itself – and this is the Ben-Gurion-like part of Defense Minister Ganz’s decision – will enjoy massive, unprecedented growth engines in the form of an investment of about 60 billion shekels over the coming 20 years. These are numbers that the Negev has not seen to date that will change for the better the state of affairs in the southern part of the country. This is only the beginning in realizing Ben-Gurion’s eternal vision, who from his cabin at Sde Boker called: Follow me.

And what about our country that desperately needs massive residential construction in the center of the country, which will all at once receive huge and valuable areas for building thousands of residential units, a significant response to the crisis imperiling the country’s social resilience.

Back in the 1950s, David Ben-Gurion decided to build a sophisticated security facility known back then as the textile plant near Dimona. Within a short period of time the plant had to recruit the best minds of the Jewish People and harness the elite technology of the time.

It clearly seemed like an imaginary and impossible mission. Tenfold more complex, complicated and challenging than building intelligence bases a 75-minute drive from Tel Aviv. And we are talking about a small State that had just been founded, with refugees and survivors on the one hand and immigrants lacking education for the most part from North Africa – on the other hand.

And that plant was built and stands. With the best experts, with endless creativity and with pioneering help and love of country. Improvised recruitment stands were set up there and then on the main streets of Tel Aviv, and good people were recruited. Along the way the cities of Dimona, Arad and Be’er Sheva were strengthened and reinforced.

With all due respect to our wonderful men and women from the 8200 Unit, the challenge of Dimona of the 1950s was a million times more difficult than the important mission which Defense Minister Ganz assigned the IDF on the 29th of November this week.