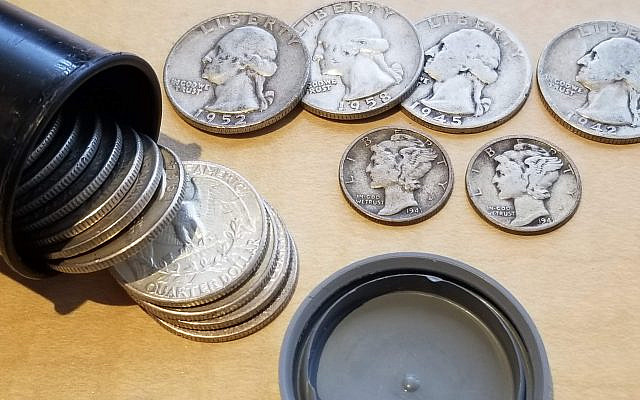 The news was bad this week  …

Like a message in a bottle, that opening half of my father’s one-liner spilled out of a film canister full of coins I put there in 1966 when I was a 12-year-old paperboy and news was king. Philadelphia had four major newspapers. Now, it barely has one, the Philadelphia Inquirer, which is in bankruptcy. It was a morning edition competing with the defunct afternoon Bulletin and the tabloid sized Daily News, favored by mass transit riders. In addition, there were small “locals” which, in the days before on-line searches, were advertising “rags” fronted by a page or two of syndicated puff news. I got a job as a proofreader at a local paper when hapless kid who had the job before me was fired for failing to correct a top of the fold headline reading “Group Aides Rape Victims,” a story about a local women’s advocacy group. Verb vs. noun. Ooops.

People depended on newspapers to tell them what was happening in the world. Businesses depended on papers to help sell their wares. Today it’s hard to make a living selling the news. Just ask the Times of Israel. Everyone is just plain making it up and giving away for free.

Every other kid I knew had a paper route for one of the papers, maybe two. On Fridays we went knocking on customers’ doors with a coin changer hung on our belts, collecting the 68 cents for the daily plus Sunday edition. When they raised the price to 75 cents, we feared an economic catastrophe. No matter how big a cheapskate the customer was, we could depend on getting the 2 cents as a tip but customers wanted the “silver.” 200 papers x 2 cents lost meant a $4.00 haircut. Considering a good sized paper route only paid about $25 a week, that was real money. Though there were a few big tippers who told us to “keep the change” on a dollar, thirty two cents was real money in 1966,   the cost of half a dozen eggs or a gallon of gas.  So any smart paperboy gave change for dollar as two dimes and a nickel, making it hoping for one of the three as a tip.  We also made a couple bucks a month by separating out the silver “Mercury” dimes from the cheesy 1965 alloy “Eisenhower” dimes and look-alike quarters and selling the silver to Mr. Marino for 3% over face value.   Mr. Marino was the guy who came to our homes to collect the newspaper’s lion’s share of our cash collections. Today,  even “junk” silver coins are worth 15 times face value. Mr. Marino is on a beach somewhere right now, sipping drinks with umbrellas from a silver chalice.

Do 12-year-olds have jobs today?  I don’t know, but when I “retired” from my paper route after three years of getting bitten by dogs and piloting a Schwinn American with white walled tires and with 50 pounds of rubber band wrapped newspapers through fair and foul weather, I got a big money job as a lifeguard at $1.65 an hour. The young blood who inherited my route then collected at our door. If he came on the weekend and my father was home, he would answer the door and invariably ask him,

The news was bad this week, do I have to pay full price?

Dad, it was one of those weeks.