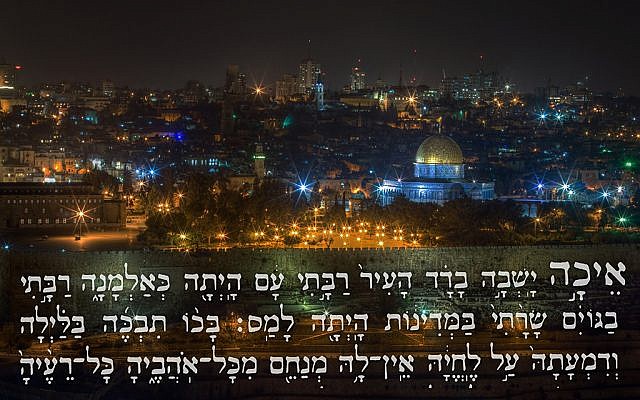 Last year, as we arrived at the reading of Lamentations in Jerusalem, we were greeted by the smell of grilled meat.

Like other mourners of Jerusalem, we had made our way to the Tayelet in Armon HaNatziv — a beautiful promenade overlooking the Old City and the Temple Mount. There, alongside a group from a local synagogue that had gathered to read Eicha, was an Arab family having a barbecue. They were young and old, with men in jeans and women in hijabs, and children darting and prancing in the darkness. Our stomachs grumbled as we sat down on the grass, turned on our flashlights, and listened to the mournful tones of the poetic lamentations for the destruction of the Temple.

As we listened, the Old City stretched out before us, its amber and white lights glistening against the purple-black sky. A blaze of light marked where the Western Wall stands, flanked by the silhouette of the bridge that leads to the Temple Mount. The regal, golden Dome of the Rock capped the scene.

We sat on the ridge where Abraham is said to have stood with his son and seen the place of the binding from afar, and listened to the words of the prophet Jeremiah. Alas! Lonely sits the city, once great with people! It was a bit difficult to relate to the image of Jerusalem as a lonely widow, weeping in the night with no one to comfort her, as she stretched out before us, largely rebuilt, surrounded by her loving children.

Midway through the second chapter, the sound of the muezzin filled the air. The sonorous, cacophonous calls to prayer in Arabic were a stark reminder of the limits of our autonomy and the inaccessibility of our holiest place in the holy city. The sense of loss became a bit more real.

As Larry began reading chapter three in a deep baritone voice, a commotion broke out alongside us. My friends Gaby and Ruth went to see what was amiss. Gaby returned and reported: “The police asked the Arab family to move their barbecue because Jews want to pray where they are sitting and eating. I told them that the Arab family was here first. One of the officers argued that they were being disrespectful and said that he wouldn’t eat a sandwich in the middle of an Arab village during the fast of Ramadan. I told him that the difference is that the promenade isn’t exclusively Jewish; it’s a space that we share.”

Eicha pretty much ended for me at that point. Thoughts of the past devastation of Jerusalem were replaced by concerns for the present, and the delicate relations between the two peoples who frequent this shared Jerusalem space.

Since it was impossible to concentrate amidst the din, I joined my friends who were beseeching the police officers at the barbecue. “The people having the picnic aren’t disturbing our reading,” I said to the police officer closest to me in Hebrew, “but the confrontation that you are having with them is. Can’t you just let them stay?” Eventually, some kind of agreement was reached and the police left. One of the men of the family offered us coffee and watermelon. “It’s Tisha B’Av. We’re fasting,” we replied, “and we apologize for what just happened.”

When the Eicha reading was over, I went home and scoured the Internet, looking for any Jerusalem bylaws that would prohibit a picnic by individuals in a public place on a Jewish fast day. I couldn’t find any.

The next day, as the fast of Tisha B’Av drew to a close, I messaged one of the police officers via Facebook, after a friend pointed me to him. He was an English-speaking immigrant who volunteers at the local police station. I asked for his perspective, not to argue, but to understand.

For the last four years, he explained, he had been part of the security effort on the promenade on Tisha B’Av eve, when more than 3,000 people, from Israel and abroad, gather in small groups along the grassy slopes to read Eicha and learn about the destruction of the Temples in Jerusalem. Since it is a solemn fast day, the police ask for all visitors to the area to be respectful — Jews, Muslims, and Christians alike. As he reported it, the decision to ask the group to move was complicated and was taken in consultation with the local commanding officer. The Arab family, who he said was known to the police, had been brought to the attention of the officers not by our prayer group but by a different one. The officers asked the family to move to a part of the grounds that Jews do not frequent and to commit to not lighting a barbecue, as that would be disrespectful of the Jewish fast.

According to the officer, in the period leading up to Tisha B’Av each year, Druze police officers, who work in the nearby Arab villages of Jabel Mukkabar, Sur Bahir, Umm Lisun, and Umm Tuba, contact the mukhtars and imams (heads of local government and worship leaders) and ask them to get the word out that, on the night of Tisha B’Av, the police do not want provocations such as picnics in the parts of the promenade that are used by thousands of Jews for prayer. For this reason, the family was asked to find a spot somewhere else on the vast expanse of grass and pathways.

As he told it, the police had been instructed to take special precautions to protect the Jews on the promenade, in light of the political situation, statements by anti-Israel groups, and updates received from the intelligence community. He said he found it most distressing that he had to deal with fellow Jews who were trying to interfere with a situation — or potential situation — that was much bigger than their group’s prayer experience. Thus, while we were trying to minimize conflict between Jews and Arabs, the police were trying to achieve the same goal, but from a different background and perspective.

I was again reminded of the multiple layers of conflicting perceptions that characterize our daily lives in Jerusalem. Was the barbecue alongside us a deliberate provocation? It’s impossible for me to know. But even if the adults did aim to provoke, I hope that the intervention of the people from my prayer group contributed to the long-term goal of creating better relations between the peoples of my city, for perhaps, in the future, the children who were scampering on the grass will have a memory not only of Jews as police forcing their family to move, but also of Jews as neighbors inviting them to stay.

This year, for the first time in many years, the Jewish fast day of Tisha B’Av and the Muslim holiday of Eid al Adha are being celebrated at the same time. While Jews are commemorating the destruction of the two Temples in Jerusalem as a result of sinat chinam (baseless hatred), Muslims will be observing the first of the four days of the “Festival of the Sacrifice,” which their tradition sees as connected to the story of the binding of Abraham’s son Ishmael. As in the Jewish story of the binding of Isaac, in the version in the Koran, God tells Abraham to sacrifice an animal in lieu of his son. For this reason, Muslims celebrate this holiday by sacrificing a lamb and eating meat.

What are we to make of this synchrony? Against the backdrop of the horrendous murder of Dvir Sorek, a 19-year old yeshiva student who was found clutching a novel by peace activist David Grossman that he had bought for his rabbis as an end-of-the-year present, Rabbi Michael Melchior, who works indefatigably with religious leaders in the Muslim world to bring about peace and coexistence, has disseminated a message in Hebrew and Arabic that explains both holidays, calls on adherents of both religions to appreciate each other’s traditions, and to mark their own holidays with love and mutual respect.

For Rabbi Melchior, the simultaneous commemoration of Tisha B’Av and Eid Al-Adha is an opportunity for members of both communities to remind themselves that baseless hatred brings destruction, and that today, more than ever, we need more mutual understanding. It is also an opportunity for us to remember — for the sake of all our children — that in both traditions, God commanded Abraham/Ibraham not to sacrifice his son, but to sacrifice an animal instead, stressing the sanctity of human life. 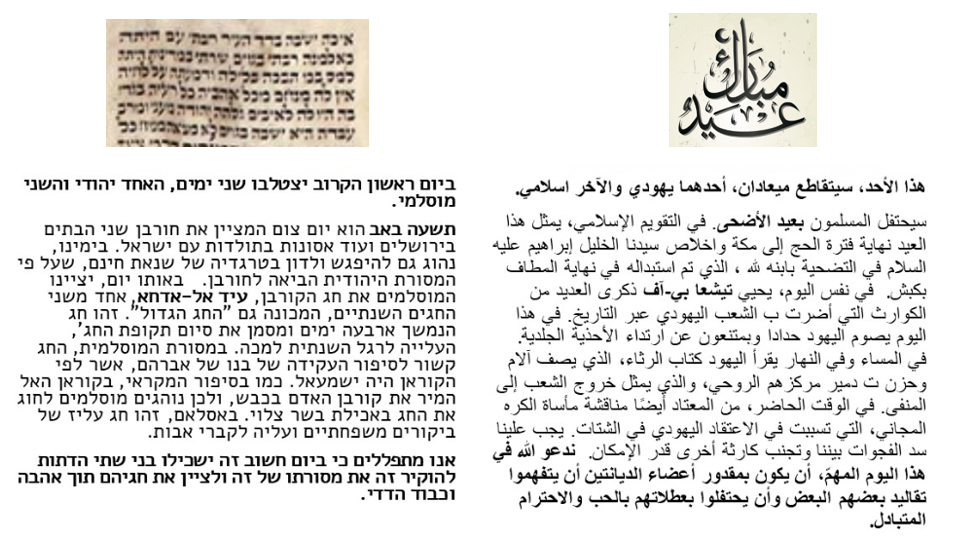 The message in Hebrew and Arabic disseminated by Rabbi Michael Melchior in advance of Tisha B’Av and Eid Al-Adha in 2019.
About the Author
Shira Pasternak Be'eri is a Jerusalem-based editor and translator. She is married to Leonard (aka Eliezer) and is the proud mom of three boys, two of whom are soldiers in the IDF. Born and raised in New York, she has been living in Israel since 1982. And yes, she is Velvel Pasternak's daughter.
Related Topics
Related Posts
Comments