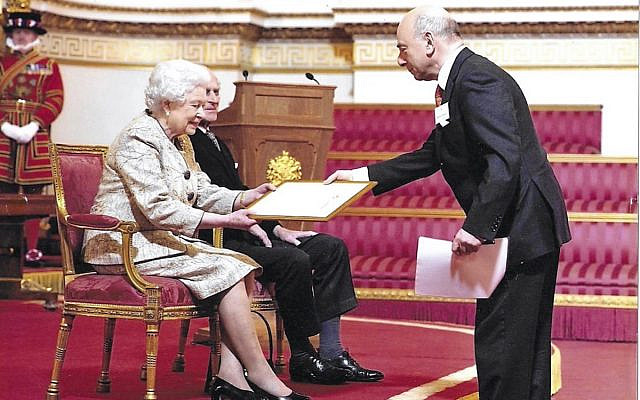 Vivian Wineman in a presentation to Her Majesty of the loyal address on her Diamond Jubilee at Buckingham Palace.

Prince Phillip has broken several  records; the longest serving consort, his wife  the oldest occupant of the throne and the longest reigning monarch in British history. Moreover the coverage of his death has already brought more complaints to the BBC  than any previous news story-almost 110,000. The Beeb has already set up a website just to deal with them. Effusive tributes have poured in from all sections of British society.

But no section has been more effusive than the Jewish community. In part this stems from a long established tradition in Jewish history. As David Aberbach showed, in his masterly work ‘European Jews, Patriotism and the Liberal State’, Jews have been great exemplars of the phenomenon of minority patriotism, where minorities in a country, anxious to prove their loyalty, end up outdoing the majority group in their demonstrations of patriotism. This ties in with Jewish law. The injunction to pray for the monarch dates back to Biblical times, and sacrifices on his behalf are attested in Josephus and in the Apocrypha. Besides, monarchies in Europe were often seen as protectors of the community. Jews in medieval times were often known as servi Camerae regis, servants of the royal chamber. Minorities also like stability.  As the saying goes, better sixty years of tyranny than one anarchic night.

This is especially true of Britain. The Board of Deputies itself, grew out of a loyal address presented to King George III, and down the centuries various members of the Royal Family have graced communal functions on numerous occasions, and acted as patrons of many communal charities. Prince Phillip was more active than most. Only fifteen years ago he was Guest of Honour at a Board of Deputies dinner addressing the audience with a vigour and intelligence that belied his eighty four years.

There was another side to it however. Like many members of our community he was a newcomer to this country, being an immigrant from a troubled continent, who in all probability owed his life to his ability to find refuge here. Whereas members of his immediate family married German princes and were tainted by contact with Nazism, Prince Phillip fought gallantly on behalf of his adopted country receiving awards for bravery . He shared with us a loathing of Nazism and a pride in the country which had done so much to defeat it. I was privileged to see yet a further side. In 1994 my wife and I were honeymooning in Jerusalem. One morning there was a commotion in the hotel as the staff came out to cheer Prince Phillip, who was on a private visit to Israel ,the first by any member of the Royal Family. He was there to collect an award from Yad Vashem on behalf of his mother, Princess Alice. During the Second World War she was living in Athens, and at great risk to herself, saved a Jewish family. The Greek Jewish community was an ancient community which was particularly badly hit by the holocaust. The refugees sheltered by the Princess would almost certainly have been murdered but for her courageous action. For this she was being honoured, a few years after her death, as a Righteous Gentile. I went around the hotel proudly proclaiming, to everyone who was prepared to listen, that I was British and that this was the husband of our queen.

Righteous Gentiles are often notable for their inherent decency and this was a quality of Princess Alice, and one inherited, it seems, by her son. Underneath his abundant charm ,his raffishness and his fondness for, in his phrase,  dontopedology  an ability to commit gaffes in all seven continents, there was that clear understanding on his part, of the difference between right and wrong, and a sympathy and fondness for minorities in general, and Jews in particular. He demonstrated this on the Queen’s Diamond Jubilee. There are about thirty privileged bodies in the United Kingdom entitled to present a loyal address to the monarch on such occasions. They include the Corporation of London, the Bank of England, the Universities of Oxford and Cambridge and similar organisations and include also the Board of Deputies.  We wished in traditional Jewish fashion that he should live till he was one hundred and twenty. He responded warmly. Visibly amused he said that he was definitely not going on that long!

He didn’t but he nearly did. May his memory be for a blessing.