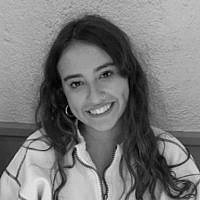 The Blogs
Alexa Greenstein
Apply for a Blog
Advertisement
Please note that the posts on The Blogs are contributed by third parties. The opinions, facts and any media content in them are presented solely by the authors, and neither The Times of Israel nor its partners assume any responsibility for them. Please contact us in case of abuse. In case of abuse,
Report this post. 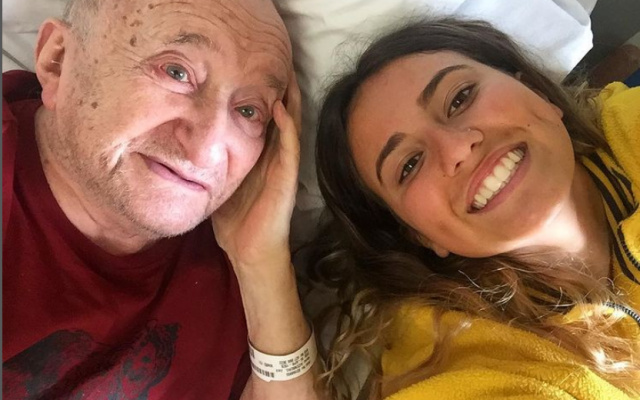 Photo taken by me with my grandpa Jack

Tuesday 17th May 2022. The day the world, my family, and I lost a grandfather, a father, an educator, and a fighter. Jack Aizenberg, at 96 sadly passed away leaving a profound legacy behind him.

In 1942, Jack was found by the Nazis in his small hometown Staszow, Poland. On this day, Jack was separated from his parents and nine-year-old brother, Shmelke. From then, my grandfather never saw his family again as it is assumed they were all taken to a gas chamber. Thirteen-year-old Jack was taken to become a slave laborer manufacturing armament in various factories. He was then put on a cattle truck which hundreds of Jews were ushered into and squashed, to be taken to Buchenwald concentration camp in Germany. Jack, still fighting to survive was going to continue working in brutal conditions whilst being tortured by the Nazis, through starvation.

In 1945, Jack was faced with the most heinous challenge yet when he and 600 other Jews were forced on a two-week, 100-mile death march to a concentration camp in Terezin, Theresienstadt. Jack was one of 60 who survived. A memory that Jack held onto was his pea anecdote. My grandfather found a dried-out, single pea which he split into quarters to savor. This became a fundamental aspect of Jack’s survival story that was shared worldwide.

Jack spent a few weeks in Terezin and was then liberated by the Russians. He was taken to Windermere, the Lake District which supported him in the rehabilitation process. Windermere has excellently documented the survivor’s experiences, through an exhibition showcasing the stories of Jack and the other ‘Windermere boys’, displaying the details of life post World War II. My grandfather went on to meet his wife, my grandmother Rhona and had two children, Debbie, my mother, and Ivor, my uncle. He went on to own a successful luggage manufacturing company with two other survivors. Despite his intense suffering, he went on to be a thriving businessman. Jack once stated: “I’ve seen two worlds. I’ve been in hell and the last 60 years in paradise.”

Jack Aizenberg, a pioneer of Holocaust education was an advocate for sharing his story with as many people as he could. His storytelling skills and captivating demeanor left his audiences with a renewed knowledge of the Holocaust and in awe of his experience. From traveling to schools for many years and sharing his narrative with children to starring in the ITV series ‘Strictly Kosher’, my grandfather ensured his story of survival was not only heard but also vividly remembered. Eighty years on, his primary intention was to create an impact through a broader lens of Holocaust education.

Strictly Kosher is a three-part series about the Manchester Jewish community in which Jack starred as a Holocaust survivor, sharing his narrative. In this show, Jack’s personal experience of him returning to Poland and the camp he resided in was filmed. Jack always stated, “My visits back to Poland was my way of reconnecting with my lost family.”

Jack’s inherent passion to educate people on the details of the terror he experienced has shaped the meaning of Holocaust education in England. Indeed, being dehumanized to that extent is deeply traumatizing and could form an abhorrent perspective of Judaism and even life itself. In Jack’s eyes, his experience was never something that should be silenced, it was a way of inspiring and educating people on Jewish history. Jack’s eagerness to endeavor on sharing his story of survival was always a special quality that was nationally recognized. He spoke at multiple Yom HaShoah events around England and was the guest of honor for many charity events. Jack found a myriad of ways to project his narrative to national communities, creating an accessible way to comprehend such an extreme tragedy.

At 85 years old, my family organized a Bar Mitzvah for Jack in which he read from the Torah. Jack missed his Bar Mitzvah as he was in the middle of the war however relived this significant milestone in a Jewish boy’s life with his wife, children, and grandchildren. In the face of such extreme suffering due to his identity, I always found it remarkable how Jack found a place in his heart for Judaism and Jewish traditions. In Jack’s eyes, the rigid rules of Judaism were not imperative to follow, rather, exercising his Jewish identity and exploring the meaning of being a liberated Jewish man was his priority. He said, “I am not religious, but I believe in humanity.”

Jack was always one to advocate for equality based on his experience of prejudice. One of his quotes was: “The Torah says the Jews are the chosen people. I don’t want to be the chosen people. I wish my passport said my nationality was human race.” My grandfather displayed acceptance throughout his lifetime and consistently aided other people. His compassion and love for the whole human race were exceptional aspects of his character.

Prior to his passing away, Jack again ensured to further Holocaust education and planned the publication of his book for later this year. His book will not only represent his experience in the Holocaust but also be a contribution to contemporary Holocaust education.

So, the underlying purpose of composing this article is to stress the importance of carrying on the legacy of not just Jack, but all Holocaust survivors. We are one of the final generations to personally engage with Holocaust survivors and thus, we are wholly responsible to compile as much material as possible to pass on to future generations to ensure Holocaust education will remain a significant jigsaw piece of the Jewish history puzzle.

Here is a video of Jack’s story of survival in 20 minutes: JACK AISENBERG’S JOURNEY – 30 Mins 2013 on Vimeo

About the Author
I am currently teaching English in an elementary school on a Masa program, in Rishon Lezion. I was born in Manchester, England so I am a native English speaker and moved to Israel 8 months ago. I am currently in the process of making Aliyah so I wish to stay in Israel permanently. I am keen to create a portfolio of tech based articles as I aspire to be a tech Journalist after my program. I would love to start sharing my thoughts on different start-up's in Israel based on my interviews with employees and CEO's.
Related Topics
Related Posts
Comments