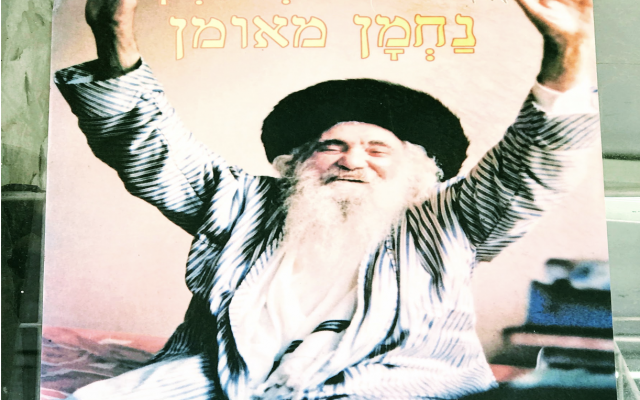 Last night I had a scary dream. In the dream, I was on a mountain, near the edge of a cliff. A voice told me to dig and throw the dirt over the cliff. As I looked out over the ledge, it was a complete and endless abyss! And like Sisyphus rolling the rock uphill only to have it roll back down and have to start all over again, I understood that the digging and throwing the dirt was a Sisyphean task. But then the voice said encouragingly to me as that vision rolled away:

And I understood that G-d was telling me not focus on my mistakes or failures in life, but rather on what my mission is now and ahead of me in serving Him, and that this was meaningful, beautiful, and that I should trust in Him for the good!

This reminded me of what Rabbi Nachman of Breslov said:

If you are not a better person tomorrow than you are today, what need have you for a tomorrow?

As I sought to understand my dream even more, I became aware of an incredible difference between faith in G-d and trust in Him, and that the latter is even greater than the former.

When we have faith in G-d, it generally means that we believe that He created us and that He is the Master of the Universe. However, faith does not necessarily imply trust. Trust in G-d means that we believe that He not only created us, but that He sustains us and that there is Divine Providence in this world. When we trust in G-d, we believe that G-d is close to us and has a personal relationship with each and every one of us, and actually to everything in the world. For example, I remember learning in yeshiva that as Jews, we trust that:

Not a leaf falls from a tree unless G-d wants it to.

Hence, we can believe in G-d, but if we don’t trust in Him then we may question why bad things happen as opposed to the Jewish dictum that:

This too is for the good. (Gam zu l’tovah)

As Jews, we trust that G-d is guiding the course of events in our lives and moreover, that everything He does is ultimately for our good. Certainly, trust is not easy, especially when we face challenges and trying times in our lives and of those we love deeply.  It takes incredible trust in Hashem to say even in those times that G-d must have His reasons, a plan for us, and that even this is for our good.

Interestingly, in the Torah portion of this week, Beshalach, we see that the Israelites were freed by Hashem with many great miracles from Egyptian servitude, even with G-d splitting the Red Sea for them to cross and then drowning the great pursuing Egyptian army. Yet, despite the faith that the Israelites had in Hashem after this, they still did not have the proper trust in Him, such that when they didn’t have the food or water they sought in the desert, they complained to Moshe, such that Hashem caused him to bring water from the rock and brought Manna and quails from the heavens. This was a real lesson for the Israelites in building up their trust in Hashem.

Today, at Shabbat lunch, a Chabad Rebbetzin from Crown Heights told us that she runs a group for Jewish women on meditation and trust in Hashem. She said:

All Jews have it (trust in Hashem), but we just have to nurture it within ourselves!

Moreover, she explained that years ago perhaps things were simpler and more straightforward in that people trusted more. For example, people trusted when the President or other political, corporate, or even religious leaders said something. However, unfortunately, now we’ve lost a lot of that basic trust in them, and we don’t readily trust, first of all, that what they say is the truth and secondly, that what they do is for our good. In essence, we are a lot more skeptical and rightfully so given our personal and collective experiences with others manipulating us, misleading us, outright lying to us, and doing things for their good, as opposed to ours.

The difference though is that this is not the case with G-d and we can most certainly trust Him fully, because He is all good, and He created us in the ultimate act of good, which is to altruistically give us the opportunity to live, learn, and grow in our goodness and thereby become closer to Him!

There is an interesting example of belief in G-d and trust in Him that I’d like to share. A number of months ago, the Rabbi in our community and his family lost their home to a terrible fire on Simchat Torah. The good news though was that the family was in Shul at the time, and no one was hurt, thank G-d. So, there were two ways to look at it:

One was from the perspective of faith in G-d but didn’t have the high-level of trust in Him, and questioned:

How could the house burn down on Simchat Torah while the family was in synagogue davening (praying)?

The other perspective of faith and trust in G-d said the following:

Thank G-d that the house burned down while the family was in shul, and no one was hurt!

In simplistic terms, in these trying circumstances, you could say the first type of person saw the glass negatively as half empty, while the second type of person saw it instead for the good as half full! Again, it’s not easy to have the faith and trust, but this is something as the Rebbetzin said, we each innately have within us!

As we look at having faith and trust in Hashem, I think about a quote from a martial arts movie that I watched recently, and the teacher of the main character tells him:

A high and powerful mountain is still lower than the small grass that grows on top of it.

In other words, we all need to leave our egos at the door! No matter how strong or smart that we think we are, even the little grass above us (or above our graves) is greater than us. Certainly, G-d Almighty who is our creator and our sustainer, all-knowing and all-powerful, He is over us and watches over us in better times as well as those that are perhaps more challenging, but always we trust, for the good!