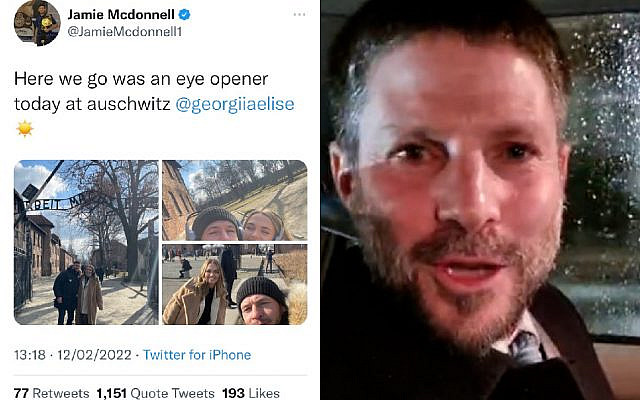 This week it was Valentine’s Day, once a relatively innocuous date in the calendar that got hijacked by commercial interests – such as greeting card companies – and soon became a tacky byword for processed vulgarity.

As it happens, there were two such examples to underline that, and it’s almost wearying to discuss which was the more repellent.

First was the couple who decided to have a Valentine’s weekend visit somewhere really romantic, and take selfies, as you do these days, to confirm that they’d actually been there.

And where was this romantic destination, I hear you inquire? Why, none other than Auschwitz. That’s right, Auschwitz, against whose gates an ex-British boxer, Jamie McDonnell, chose to pose with his girlfriend, radiantly smiling into the sun.

As if the pictures weren’t nauseating enough, McDonnell, when challenged, took umbrage. He told critics: “Ok, mate, it’s a tourist place, is it not, so if we visit we can’t smile? Come on, pal. That’s why I am there, obviously, I have a weekend away with my girlfriend, I’m not going to not smile, am I, but I understand what’s happened, chill out a bit [sic].”

The kindest construction I can put on this is that McDonnell must have been hit on the head once too often, though the girlfriend plainly needs her bumps reading, too.

But hey, chill out, as McDonnell would say, it’s Valentine’s, so love is in the air. And love is what the deeply unpleasant Israeli far-right Knesset Member, Bezalel Smotrich, who “honoured” Britain with his unlovely presence late last week, wished Anglo-Jews.

He loved us all, he insisted, after an unmistakably clear message from the Board of Deputies that he was an unwelcome visitor and should “get back on the plane”.

In case there are those still wondering why the Board reacted so strongly, Smotrich’s track record of hatred of Arabs, lesbian, gay, bisexual and transgender minorities and Reform Jews should be evidence enough. Good on the Board and its chief executive, Michael Wegier, for stating loudly – and in Hebrew, so there should be no confusion – that racist politics has no place for the majority of British Jews.

But some obviously respond to Brand Smotrich, otherwise he would not have been here in the first place. I wonder if home secretary Priti Patel was asleep, because he should never have been allowed in to Britain at all. There is precedent: in 2008 the then home secretary Jacqui Smith banned far-right Israeli Moshe Feiglin, saying his presence was not conducive to the public good. The same should have been done with Smotrich. As it is, his loathsome message can only have served to underline the message claimed by Amnesty International that Israel is an apartheid state.

Bnei Akiva, I understand, is an affiliate of the Board, in which case some tough questions need to be asked. That noise in the background is the sound of serious back-pedalling by Mizrachi and BA, each claiming “It wasn’t me, miss, who invited him.”

Yeah, yeah. As with McDonnell, some people no longer understand what is acceptable and what is beyond the pale. But, you know, chill out. Bezalel loves us, so it’s all okay.