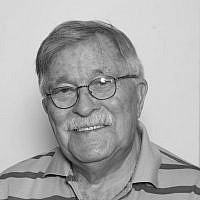 The Blogs
Dov Bet-El
Apply for a Blog
Advertisement
Please note that the posts on The Blogs are contributed by third parties. The opinions, facts and any media content in them are presented solely by the authors, and neither The Times of Israel nor its partners assume any responsibility for them. Please contact us in case of abuse. In case of abuse,
Report this post.

A look from the Observer’s Nest

In a recent Times of Israel daily newsletter there was a story about Yizthak Herzog getting the nod for a 4 year stint as chairman of the Jewish Agency.

I wish to scream at the top of my lungs WHY? He is least qualified or capable person on our planet to build the bridges, to heal the serious rift and damage that has been done between the Jews of Israel and those of the Diaspora.

With a nod and a wink of the backroom deals between the Israeli political parties and the leadership of the Jewish communities from around the world, stomach turning political slop has been dished out that has absolutely nothing to do with the needs of world Jewry.

The people of Israel are purposely kept in the dark of what is happening with our much needed partnership with the Jewish communities worldwide. They need to be partners in our lives and the development of our beautiful Land of Israel.

Natanyahu is boiling mad that the nominated person of the Labor Party got the chairmanship of the Jewish Agency while the Likud Party will be allowed to take the leadership of the Jewish National Fund. What a load of mind boggling petty nonsense. Having a strong bond with our brothers and sisters in the Diaspora is certainly more important than Labor, Likud and all the rest of the dozing politicians that are supposed to govern our Country. The Jewish Agency should be allowed to do exactly what it was created to do. Working around the world to encourage Aliyah to Israel while helping and safeguarding the Jewish people where ever they may be.

At the end of his era Sharansky was weak and lackluster, as an example he allowed Natanyahu to completely wreck the arrangement to allow all Jews of all stripes of belief to pray at the last remnant of living Jewish history a small piece of the Temple Wall. Then suddenly in order to rescue the power hungry narrow needs to safe guard his governing coalition he caved to the religious parties and did a 180 degree turn about and walked away from the much needed deal.

At least Sharansky knew something about the Diaspora, living in it, developing a Jewish life there, yearning about coming to live here to the point of spending years in a Soviet jail to gain his rights and freedom. What are Herzog’s credentials? Born into the ruling class, never having strain himself for anything, hanging on to coattails of his father Hiam who served as President of Israel and his grandfather chief Rabbi Herzog. Certainly there are many dozens of capable people to take the leadership of one of the most important posts of the Jewish world.

Sad to say that the bad old days of Mapai are back when party hacks get high paying positions when those posts need talent, knowledge, and experience. How much longer will the leadership of Israel be asleep at the wheel and wake up to the fact that time is running out for a strong bond with Jewish Youth. around the world, don’t just leave it to Taglit.

Taglit is a privately funded undertaking that brings the younger generation of the Jewish people for a free 10 day trip to Israel. It is remarkable the number of those participating fall in love with Israel at first sight. Keep in mind the daily battering that Israel takes on University campuses world wide is mostly ignored locally. We have to understand that the screamers of today on those university campuses could possibly be the political leadership in their countries tomorrow!

All Herzog will do is what is best for his come back in the Labor Party and that is no joke.

Sadly from the Observer’s Nest

About the Author
Born in Eastern Canada family moved to Toronto in 1943 to be closer to a larger Jewish population. After completing Electrical studies came to Israel for a 'yerar' which has not yet finished . Setlled in Kiryat Gat in 1957 married my late wife, Z"L was a super woman from Machester. Have 3 daughters all wildly successful with 5 grandchildren. Have remaried to another super human being. between us we have 6 kids and 12 crandchildren. Moved from Kiryat Gat to Jerusalem 14 yeras ago and 7 months ago moved to Petah Tikva.
Related Topics
Related Posts
Comments