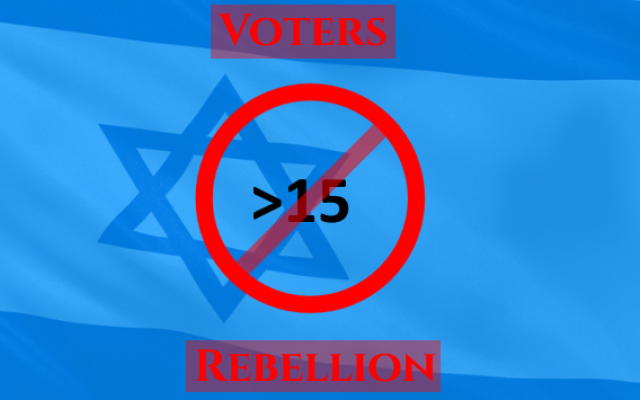 What would happen if Israeli voters were to simply boycott the big parties?  Any party that has a showing of over 15% in the polls, just refuse to vote for them?

It would be sort of like a negative voting threshold.  And I suspect it would do wonders for Israeli democracy.

One of the reasons we have the electoral threshold that bars parties with less than 3.25% of the votes from entering the Knesset is to reduce the number of small parties.  But that’s because in the presence of large parties, small parties have disproportionate leverage.  That’s not the case if all the parties are small.  In a case like that, you’d have a true marketplace of ideas.  You might have a stable coalition for big national things, but for every-day matters, ad hoc mini-coalitions to pass this or that law (or repeal them) would be possible in a way that isn’t today.  Parties that disagree about social issues may agree about diplomatic issues.  Parties that disagree about religious issues may agree about economic issues.  And parties would be less likely to threaten to leave a coalition, because there would be a dozen other parties that could easily take their place.

It’s time to rebel against a political establishment that thinks it owns us.

Just say no to Blue & White, the issueless party of failed generals.

Just say no to Likud, the party of King Bibi.

Vote Meretz.  Vote Shas.  Vote Bayit Yehudi.  Vote Kulanu.  Vote Zehut.  Heck, even vote Labor, now that they’re down to 6 seats.  I guarantee you they’ll be listening to you now far more than they did when they were monstrous big.

There are 43 parties running in the elections.  Aside from the ones you’ve heard of, check these out:

Find out what all these parties stand for, and find the one that truly represents what you want for Israel.  Forget the big parties.  They don’t care about you.  They only care about their seats.

Democracy doesn’t work when you only vote for the biggest and loudest voices.  The ones who have their hands on the reins of power and make all the decisions in this country.  It only works when you vote your conscience.