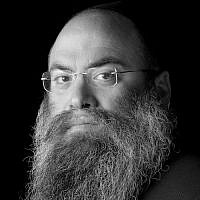 Jared Kushner went off-script while addressing the dedication ceremony of The US Embassy in Jerusalem. He referred to Jerusalem as the “eternal heart,” not capital, of the Jewish people.

This must have been the Psalmist’s description speaking from his heart. “The city which has joined us all together.” No matter how dispersed or oppressed, thousands of years and hundreds of generations of Jews have all had their hearts bound together by Jerusalem.

The momentous event celebrating the new Embassy precedes Shavuot (May 19). One of three biblical festivals, Shavuot marks the “wedding date” of our people with G-d. We received our Ketubah, His holy Torah, on this day 3330 years ago.

Marriages have ups and downs. Ours is no exception. A particularly difficult era in Persia saw Haman call for “the annihilation of the Jewish people; men, women and children – in one day.” This was not an empty threat, he was fully empowered to do it.

A modern day Haman in Persia-Iran, Khomeni, announced to the world, “We will wipe Israel off the map.” Incredulously, this too was no empty threat. Eighteen months ago, the Western world empowered him to do so.

President Trump hosted the leaders of France and Germany in Washington. They tried to persuade him not to withdraw from the Iran treaty. Indeed, the entire world begged him. Unmoved and alone, he boldly announced America’s withdrawal from this misguided treaty.

This treaty did not stop Iran from acquiring nuclear weapons. In-fact, it paved the path for Iran to get one. PM Netanyahu’s screaming, begging and pleading on every world stage he was offered, all fell on deaf ears. The world seemed more interested in engaging Iran’s resources than in the “Jewish problem.”

75 years after the Holocaust, President Trump stopped this atrocity in its tracks. The ominous death threat hanging over the 6 million Jewish men, women and children living in Israel, was abolished. For the President, this was a logical, truthful and critical imperative that he was put in his position to accomplish.

Another long-awaited reality, Jerusalem being recognized as the Capital of Israel, was facilitated this week by Mr. Trump. To the chagrin of the world, America’s embassy has been moved to Israel’s capital, Jerusalem, where it has always belonged.

Iran was humiliated. It had to flex muscle to save face. It’s elite revolutionary guard shot 20 missiles into Israel. 4 were intercepted, while 16 fell back into Syrian territory. Sheer clumsiness by those who are considered the fiercest of Iran’s soldiers?

Stored in a top-secret, abandoned looking warehouse in Iran, were the Mullahs “crown jewels.” These were the blueprints of Iran’s true nuclear aspirations. If ever discovered, the clerics would be unmasked for the liars that they are. It was critical to keep this far from the world’s eyes.

A day before President Trump’s withdrawal announcement, Prime Minister Netanyahu called an international news conference. Standing before the world, he uncovered bookshelves lined with files. This was that warehouse’s massive trove of detailed plans to build and obtain nukes. They were put on full display. The deceitful Iranians had been incontrovertibly unmasked.

History will surely record this Mossad operation as one of the greatest covert operations ever performed on enemy territory. It was the basis for President Trump’s immediate withdrawal the very next day.

Psalm 107 details real-life dangers and G-d’s deliverance from them. These wonders are to be “watched by he who is wise, His great kindness’ contemplated.”

Contemplate we must. Over the course of one week, 20 deadly missiles were fired at Northern Israel, without one single hit. The world’s leading monsters of death were exposed for who they are. Hopefully, now their days are now numbered.

The Israeli anthem playing at an extravagant military reception hosted by Premier Putin in Moscow, honoring the visiting Prime Minister Netanyahu, was quite an incredible scene. The legislator from Paraguay who explained his country’s following America’s move of embassies to Jerusalem said, “It is not for geo-political reasons, rather we want to receive G-d’s promised blessings of; “I will bless all those who bless you.”

The Iran deal has been torn up. With it a grave death threat to millions of Jews has been averted. Jerusalem has been recognized by the world’s greatest power as the Jewish people’s heart and eternal Capital.

3330 years ago, G-d chose ambassadors to spread His love and sanctity of life. From Sinai, He dispatched us all over His world to create goodness and G-dliness. These eternal missives have been dutifully executed by our people ever since.

Ambassadors have a special residence. Ours has: “the eyes of G-d upon it, always.” No time in our people’s recent history has this been more apparent than now. The present-day G-dly realities abounding round us is nothing less than miraculous.

On Shavuot we will embrace, anew, G-d and His holy Torah. Accordingly, we should make this year’s celebration more genuine, joyous and everlasting than ever before.