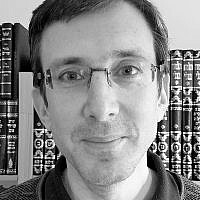 The Blogs
Emmanuel Bloch
Apply for a Blog
Advertisement
Please note that the posts on The Blogs are contributed by third parties. The opinions, facts and any media content in them are presented solely by the authors, and neither The Times of Israel nor its partners assume any responsibility for them. Please contact us in case of abuse. In case of abuse,
Report this post. 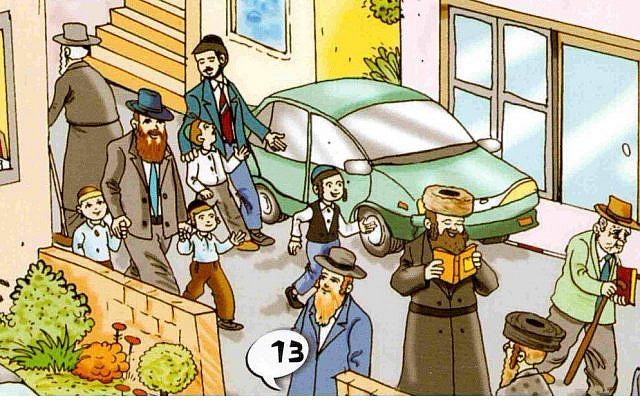 Illustration of the 'Orthodox street,' (modernorthodox.fr/un-monde-sans-femme/, via Emmanuel Bloch)

On January 24, 2018, Mishpacha magazine incurred an immense wave of criticism within the English-speaking Jewish world by deliberately blurring the faces of female Holocaust aid workers in photographs from the end of World War II[1].

However widely felt the sense of sacrilege, it is important to note that the editorial policy in the contemporary Orthodox Jewish press is to no longer show images of women to readers. Female faces are pixelated, replaced with shadows, or otherwise rendered unidentifiable. Sometimes entire bodies are simply photoshopped out of an image. Angela Merkel was thus simply erased from photographs taken during a march of solidarity in Paris, following the terrorist attacks against the staff of the journal Charlie Hebdo.

Why this systematic erasure of half of humanity? Officially, the reason given is tzniut (modesty): the image of a woman represents such a sexual temptation that it is religiously preferable to remove it from all masculine view. Such is the terrible seduction of a German chancellor in the prime of life…

But this phenomenon continues to grow in scale, well beyond the world of the press. A few weeks ago, the Israeli Central Bank provoked turmoil in some ultra-Orthodox circles, with its decision to publish banknotes representing two female poets, Rachel Bluestein and Leah Goldberg — there was even talk of boycotting these means of payment. A few months earlier, “offending” advertisements on buses were vandalized. Some companies, including IKEA, now publish catalogs specifically for ultra-Orthodox consumers — without women. 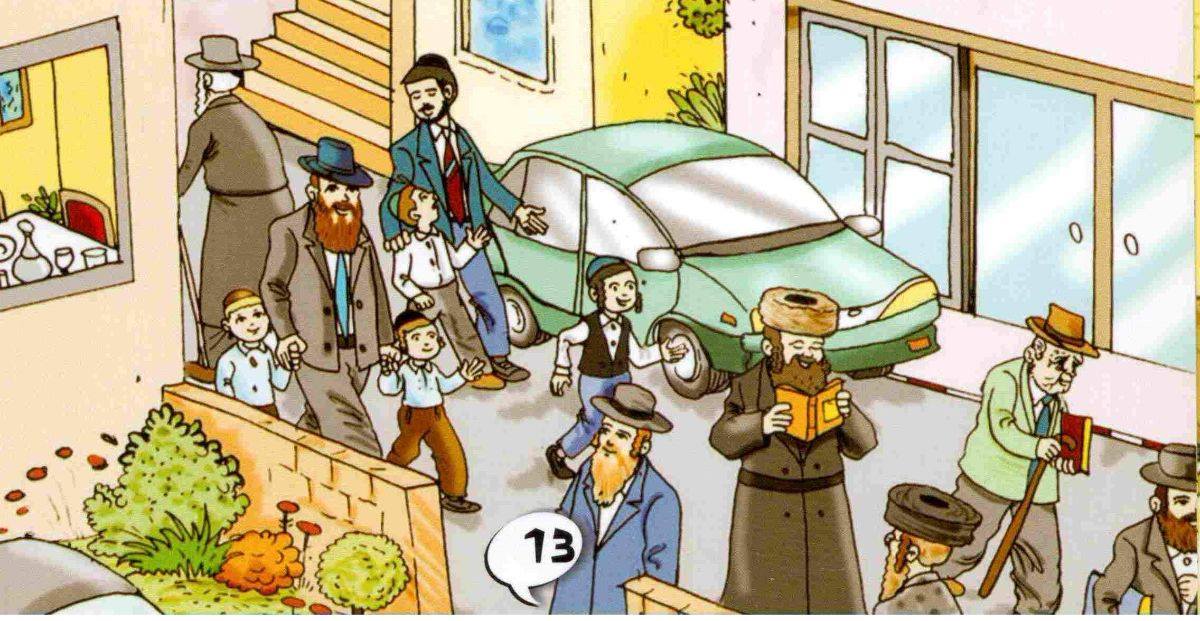 Illustration of the ‘Orthodox street,’ (modernorthodox.fr/un-monde-sans-femme/, via Emmanuel Bloch)

Children’s books are published without any female representation, from the first to the last page. This phenomenon sometimes affects other sectors of the Orthodox population — religious Zionists or Modern Orthodox. In France, some websites meant to popularize the Torah have made the terrible decision of aligning themselves with this editorial approach, producing long videos guaranteed to be 100% male.

In what follows, I would like to make a triple critique of this dramatic evolution from a historical, social, and textual perspective.

The historical reality differs from the official version: for decades, the Orthodox press never considered the publication of photographs of women to be problematic. On the contrary, it was seen as perfectly natural. It is only very recently — during the course of the past few years — that the situation has radically changed.

Historical clues for measuring the shift are numerous. One of the most important is the testimony of Rabbi Shmuel Papenheim, a former editor of a Hareidi (ultra-Orthodox) newspaper who observed the change on the ground during his own career. He openly discusses the subject in a video that can be viewed here.

Another example: Dr. Leslie Ginsparg Klein wrote her doctoral dissertation on the history of “Beit Yaakov,” a network of schools for young Orthodox girls. She spent years systematically reviewing religious press archives. It was not until 2005 that she observed, for the first time, the phenomenon of newspapers deliberately omitting photos of women.

It is also easy to verify that, in the past, traditional religious books were sometimes printed with illustrations of women dressed more or less modestly, to no complaint. The list of works includes the Shulchan Aruch and the Pesach Haggada, among many others. 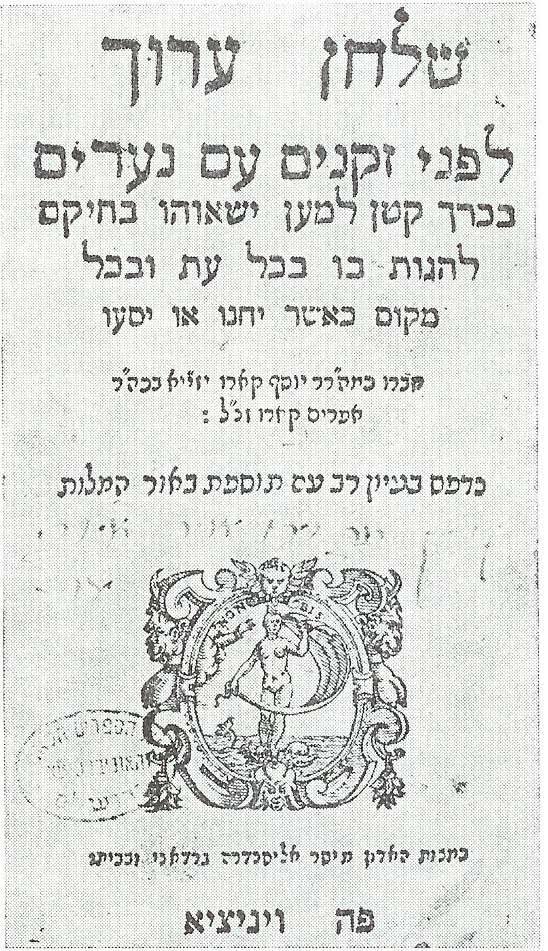 Frontpiece of the Venice edition of Shulhan Arukh. (courtesy)

To summarize this brief historical overview: the erasure of the image of women is a drastic deviation from the traditional concept of tzniut. Certainly it is not a chumra, a stricter approach to the law, a concept I recently defended on the French blog where this article was originally published. We do not become more religious at the expense of other human beings.

The gradual emergence of the “world without women” is a particularly damaging development.

First of all, of course, for women themselves: such a society reduces them solely to the status of sexual objects that may at any time arouse the temptation of men.

But beyond the feminist critique, there is also a tactical issue: from an educational perspective, the only external images to which a young religious girl is now exposed are those of non-Jewish media. And these images clearly do not correspond to the religious requirements of modesty.

Why deny young Orthodox women the opportunity to be exposed to examples to emulate, images to match the expectations of the world of Torah in matters of tzniut? Why not use the Orthodox press to thwart the harmful influence of broader media, in which women are so often hypersexualized?

What image does an Orthodox girl develop of her own body, if the only message she receives is that of the sexual temptation that she represents in the eyes of males? That even her face is non-grata?

But also for men: the removal of all female imagery does not solve the problem of male sexual temptation, it only lowers its threshold of excitability. If even a woman’s face is immodest, then everything becomes sexual in the world around us. What is bred in the bone will come out in the flesh: it is impossible to emerge victorious from within this escalated fetishization.

It is urgent that we (re)create a world of Torah that results in healthier relations between women and men.

And now for the part that is most difficult for me to write. But intellectual honesty compels us to examine how the erasure of the image of women finds support in classic Jewish texts.

For reasons of space, I will analyze here only one talmudic text, but one that I find particularly important in two respects: first, because of its dramatic character; and second, because of the extent of its contemporary reinterpretation.

Rabbi Yossi, from the village of Yokrat, had a particularly beautiful daughter. One day, Rabbi Yossi discovered that a man had drilled a hole in the fence (around the house) to look at her. The rabbi asked for an explanation, and the man replied: “Master, if I do not have the merit of marrying your daughter, can I not at least contemplate her?” Rabbi Yossi then said: “My daughter, you cause suffering to creatures; return to the earth, so that people do not stumble because of your fault” (Ta’anit 24a).

In this version of the story, the effacement of the woman reaches a terrible paroxysm. Rabbi Yossi’s daughter clearly did not exhibit any untoward behavior. There is nothing to indicate that she has even left her parents’ home. Her only “fault”? Being beautiful.

But context is crucial here. Is there a more nuanced reading of this text? Certainly, if one realizes that the Talmud actually presents this story from the point of view of a former disciple of R. Yossi of Yokrat. This disciple, R. Yossi bar Avin, is said to have abandoned his master, having noted his cruelty on several occasions. One of the examples of excessive cruelty cited by R. Yossi bar Avin is precisely the murderous behavior of the master toward his daughter.

Ultimately, this talmudic text is explicitly critical of R. Yossi of Yokrat’s inhumane treatment of his daughter, whose beauty he could not tolerate as a source of temptation for men. Such has been the understanding of the classical commentaries, like the Maharsha.

But a serious problem arises here: contemporary authorities quote this talmudic text while completely omitting the broader context of the disciple’s criticisms. Today, Rabbi Yossi of Yokrat is most often presented as an example to follow, and no longer as a foil to the extremes of male obsession with the female body.

A first example: In 1997, R. Michel Yehuda Lefkowitz (1913-2011), a prestigious Israeli rosh yeshiva, considered during his lifetime to be one of the “Torah greats” (gedolim), wrote the following, in a public letter aimed at strengthening the kedusha (holiness) of the Jewish people:

This story is astonishing! Why should she (this young girl) return to the earth? What is her fault? In fact, our Sages want to teach us the fundamental importance of Jewish holiness, as well as the importance of a Jewish girl who creates only holiness and modesty throughout her life; but if, God forbid, this young woman does the opposite, her existence (in this world) is no longer justified! And this is true even without fault on her part (free translation from original Hebrew).

A second example, from R. Pesach Eliyahu Falk, rabbi and posek at Gateshead (UK), known in the Hareidi world for his expertise in the laws of modesty:

And this passage teaches us something terrible: if a woman causes a man to stumble, she puts herself in a situation where an accuser can claim against her: “Return to the earth and never again make men stumble!” All the good deeds that she has accomplished in her life are insufficient if her presence in this world has a negative influence on the sanctity of the Jewish people. Let her not think that the Gedolim, of which she is perhaps descended, will be her advocates to defend her, because R. Yossi of Yokrat loved his daughter like any father loves his children, but the love of God that burned within him gave him the courage to act in the appropriate manner” (Levusha Shel Torah 69:5, free translation from original Hebrew).

A third example for those who suspect that such positioning is the sole preserve of the Ashkenazi rabbis: the Ben Ish Chai of Baghdad (1835-1909), one of the leading Sephardic decisors and a kabbalist of the highest order, wrote just over a century ago:

The wise man asked his daughter, “My dear daughter. Why should your beauty cause others such turmoil? Let me ask G-d for your death. At least the Evil Inclination will be stopped.” As these words left his lips, his daughter’s soul left her handsome body. The wise man realized the implications of his daughter’s extraordinary beauty (Laws for Women, chapter 1).

This willful misreading of a text in the Talmud is absolutely terrifying. The talmudic view maintained a certain balance, minimal, but necessary, which completely falls by the wayside in the interpretations of the modern authorities quoted above. Whereas the Talmud did not hesitate to criticize the excesses of extreme tzniut, these authorities do not see any problem in teaching that it is preferable for a woman to be dead than the cause of temptation.

Such a reading nurtures a fertile ideological breeding ground that, when social conditions permit, promotes the emergence of a world without women. Faced with this deleterious drift in the name of the Torah, we are no longer allowed to remain passive. Especially for those who are Orthodox, to remain in the silent majority is to be complicit in the crimes currently committed in the name of modesty.

[1] The editor of the newspaper, Sruli Besser, quickly issued a public apology. But this nevertheless raised some serious questions: if it really was a question of sensitivity to Holocaust survivors, why were images of men not blurred as well? In addition, readers have reported that some faces of women have been blurred in previous issues of Mishpacha.

About the Author
Emmanuel Bloch is an attorney, who is currently pursuing a Ph.D. in Jewish Philosophy. He lives with his wife and family in New York City. His mother tongue is French.
Related Topics
Related Posts
Emmanuel Bloch
Comments