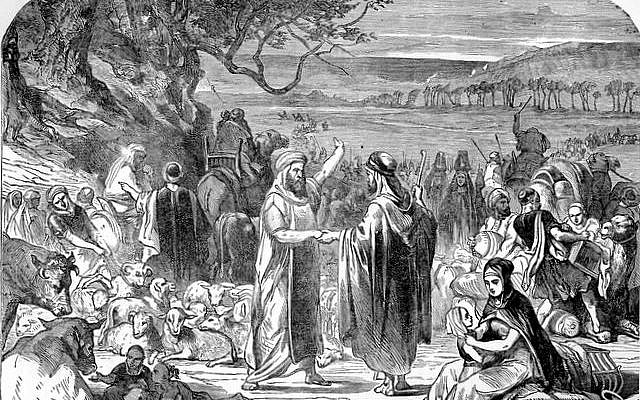 So Abram went, as the Eternal had spoken unto him; and Lot went with him… And Abram took Sarai his wife, and Lot his brother’s son… (Genesis 12:4-5)

And Lot also, who went with Abram, had flocks, and herds, and tents. And the land was not able to bear them, that they might dwell together; for their substance was great, so that they could not dwell together. And there was a strife between the herdmen of Abram’s cattle and the herdmen of Lot’s cattle. And the Canaanite and the Perizzite dwelt then in the land. And Abram said unto Lot: ‘Let there be no strife, I pray thee, between me and thee, and between my herdmen and thy herdmen; for we are brethren. Is not the whole land before thee? separate thyself, I pray thee, from me; if thou wilt take the left hand, then I will go to the right; or if thou take the right hand, then I will go to the left.’… So Lot chose him all the plain of the Jordan; and Lot journeyed east; and they separated themselves the one from the other. Abram dwelt in the land of Canaan, and Lot dwelt in the cities of the Plain, and moved his tent as far as Sodom. (Genesis 13:5-11)

The Torah begins the ancestral story of the nation of Israel with the journeys of our forefather Abraham and his nephew Lot. They both grow rich, and the strife breaks out between the herdsmen of Abraham and the herdsmen of Lot. When riches grow, so do family feuds. It appears on the surface that there is nothing unusual about this narrative. However, it may be a metaphor for an obscure but essential concept in quantum physics—decoherence.

Essentially, Quantum decoherence is the loss of quantum coherence. According to the particle-wave duality introduced by Louis de Broglie, all objects (photons, electrons, and all subatomic particles) have waves (now called “de Broglie waves”) associated with them.[1]Therefore, all quantum-mechanical objects possess wave-like characteristics, such as frequency,[2] wavelength,[3] and phase.[4] In classical physics, coherence describes the statistical similarity of a field at two points in space or time. The coherence of the two waves expresses how well they are correlated. For two perfectly correlated waves, their phase difference will stay the same. This property allows two waves to constructively or destructively interfere, when combined, producing an interference pattern. The light produced by a tungsten light-bulb lacks coherence because each point on the filament produces waves or light independently, and waves have no fixed phase relationship. On the other hand, laser light usually produces a light beam with a high degree of coherence. Holography requires perfectly coherent light, which is why lasers are used to produce holograms. 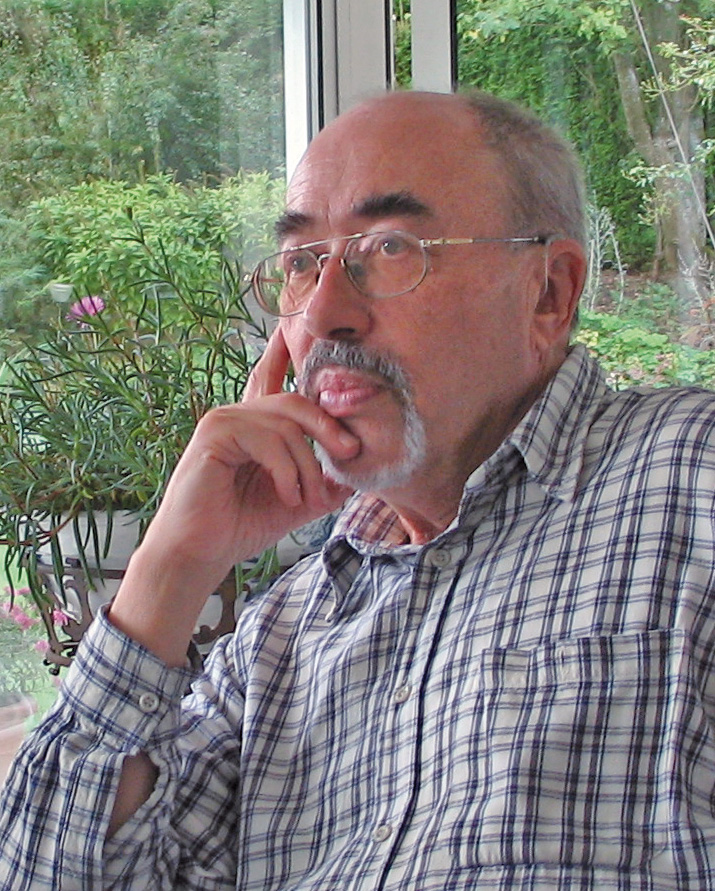 Decoherence was introduced by the German physicist H. Dieter Zeh in 1970. Decoherence can be viewed as the loss of information into the environment (similarly to the information loss due to heat dissipation into the environment).[5] If a quantum system is perfectly isolated, it will maintain coherence indefinitely; that is, the system would continue to exhibit definite phase relation between different states. However, it is impossible to investigate or manipulate a perfectly isolated system. If it is not entirely isolated, such as during a measurement, coherence is shared with the environment and will be lost with time—a process called quantum decoherence.

But what does this all have to do with Abraham and his nephew Lot? The first verse of this Torah portion states:

Now the LORD said unto Abram: ‘Get thee out of thy country, and from thy kindred, and from thy father’s house, unto the land that I will show thee. (Genesis 12:1)

In Kabbalah and Chasidut, this verse is interpreted mystically as the commandment to Abraham (at the time called Abram or, in Hebrew, Avram) to leave his lofty place in the world of Atzilut and descent into this world. As Rabbi Schneur Zalman of Liadi, the Alter Rebbe, writes in Likkutei Torah, the name of Avram can be broken down as Av-ram. Av (which in Hebrew means “father”) alludes to the level of chokhmah (wisdom), whereas Av-ram stands for “hidden intellect”—the highest level of chokhmah. From this exalted level, Avram is commanded to travel to the “land”—which, in Kabbalah, signifies sefirah of Malchut—the lowest of the sefirot.

In another place,[6] the Alter Rebbe states that while in Atzilut, Abram includes Lot—they are one unit. Their familial relationship is an allegory for quantum entanglement. Indeed, on this level, Abram and Lot are entangled. That is why Lot follows Abram when they leave their home in Horan, and he continues to follow Abram from the land of Egypt. However, Abram’s descent from his spiritual heights into this world was necessary for him to spread the idea of monotheism among the people of his generation. To accomplish this task, Abram had to enter the hostile environment to proselytize monotheism. This dissipation of information necessarily leads to decoherence, as Abram remains the righteous man he always was, while Lot gets out of sync with Abram and loses his moral compass, as evident from his settling in Sodom—the capital of immorality.

It is this moral “decoherence” that leads to ultimate disentanglement between Abraham (still called Abram at that time) and Lot, which separate and go on their ways in different directions.

Thus, this seemingly simple story of a family feud can serve as a vivid metaphor for quantum decoherence.

[4] The phase of a wave is an angle representing the number of periods spanned by time.

[5] The loss of the information into the environment and the resulting decoherence presents significant technical difficulty for quantum computing, which requires maintaining the coherence to carry on quantum computations.