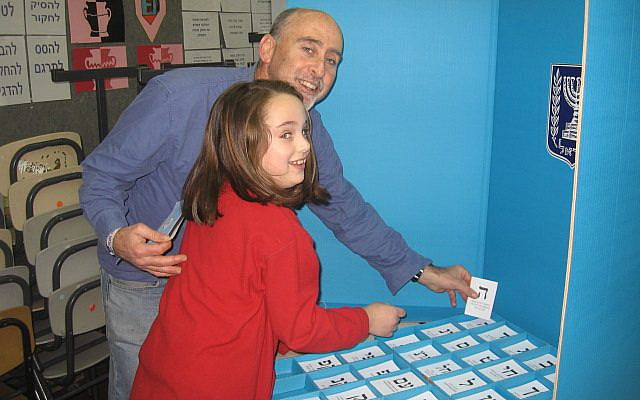 Voting in Israeli elections is too important for geographic constraints: the author and his daughter exercising their inalienable right.

With the exception of diplomats, sailors or official emissaries, Israelis who find themselves outside of Israel cannot vote. The country offers no legal framework for absentee voting. Hundreds of thousands of loyal citizens are left out of the democratic process. This makes no sense.

That’s why I joined colleagues in submitting a bill that would permit citizens living in other countries to vote without making the trip to Israel. The initiative reflects a recognition that the world has changed since the country’s founders made voting contingent on a physical appearance at a local polling station and dropping a ballot in the ballot box.

The country’s founders, who chose to disqualify Israelis living outside the country from voting, had their reasons. Theirs was a policy that sanctified residence in Israel and that sought to dissuade citizens from trying life elsewhere.

But the original policymakers could never have dreamed of a reality where the Israeli economy would become globalized, requiring companies to constantly send representatives abroad. They could not imagine a world where the low price of travel along with the local culture of wanderlust mean that most Israelis spend significant periods of time outside the country’s borders. And they could not envision an internet that allows Israeli citizens living abroad to continuously stay on top of what is happening in the country, reading daily newspapers and watching nightly news.

Israeli decision-makers in the state’s early days also had a hard time accepting emigration, (or as it is pejoratively known “yeridah” – descent) even temporarily from Israel as a legitimate decision for citizens. For them, spending time outside the country meant diminished patriotism and an inadequate commitment to Israel’s well-being. But over seventy years later, with hundreds of thousands of the country’s finest denizens finding a life outside Israel (including a litany of prime ministers’ children) the stigma of pursuing professional, personal or economic objectives outside Israel’s narrow borders has evaporated. I believe that that’s a good thing: People should be free to travel and try out new lifestyles – without guilt

Today, there are an estimated 700,000 potential Israeli voters living outside the country. Israel’s collective challenge has changed. We need to maintain a robust and ongoing connection with our ex-patriot citizens. This is not just a pragmatic stance, keeping the door open to minimize the hemorrhaging among Israel’s intellectual elite due to brain drain. Nor is it an opportunistic scam to nurture a new reservoir of support and philanthropy. Allowing Israelis living outside of Israel to vote in situ simply ensures that Israeli citizens continue to enjoy a basic civil right.

It is important to emphasize that Israel’s present legal framework is a bit quirky. On one hand, the right of citizens to vote lasts forever. It has nothing to do with how protracted or complete the disconnect with the country is among citizens living abroad. If any citizen, anywhere, is willing to travel to Israel for election day, they are entitled to vote. At the same time, the country doesn’t make this fundamental democratic right accessible to scores of Israelis living throughout the world, even when they remain very much engaged with their homeland.

In my opinion, the right to vote absentee is predicated on the powerful connection between Israel’s citizens and their State. I am not alone: a recent survey conducted by the World Zionist Organization confirms that a majority of Israelis see absentee voting rights, in most cases, as legitimate. The question is: “which cases”.

I imagine a continuum of engagement: on the one hand, there is the extreme case of detachment where a Jew immigrated to Israel — say from the former Soviet Union – with the express intention of moving on, using the country as a stepping-stone on their way to their ultimate home. After several months in residence, this stereotypical immigrant succeeds in finding a new host country – and subsequently has no further contact with Israel. Never strong to begin with, their Hebrew and civic literacy is minimal. There is probably a consensus that such individuals don’t need to be given absentee voting rights.

On the other extreme is a soldier, hitchhiking around the world, after six years of dedicated military service; or a medical doctor, spending time abroad to attain a specialty and bring it back to Israel. Here, it would seem natural to grant voting rights.

One often proposed criterion for determining the right to vote outside the country is the five-year residency limit stipulated by Israel’s National Insurance. Israeli citizens who leave the country are expected to continue to pay a nominal fee in return for the guarantee of basic services, like support in the event of disablement. According to this approach, during the first five years of citizens’ absence, they should be entitled to vote absentee.

Such a temporal test strikes me as a bit random. I can imagine people who forget about the country the second they spread their wings and move on. Alternatively, other long-term residents retain an allegiance and attachment decades after emigrating. Gal Gadot has, for years, spent much of her time living out of the country. Surely, she retains her Israeli identity; and she is certainly a source of national pride. I wish Danny Avdija a long and storied NBA career, with his photograph staying on Israeli cornflakes boxes for years to come. These are busy people. Why should they not be allowed to vote absentee? It may be more challenging for the staff at the Interior Ministry to determine, but I prefer a substantive criterion for voting rights.

When studying “civil procedure” in Hebrew University’s law school, I remember a geographic test that the professor shared from the British Common Law to define the authority of a court to rule in a given legal action: “One should wake the hypothetical defendant up in the middle of the night and bellow at them: ‘Where is your home?’” Presumably, whatever place they instinctively blurt out, is a natural venue for the trial.

This, admittedly, is a tough test to administer. My colleague in the Knesset, New Hope MK Tzvika Houser, has supported absentee voting for years, ever since he was cabinet secretary a decade ago when he commissioned a study on the topic. He advocates a simpler test. Hauser argues that the best objective indicator of Israeli involvement is taking the time to vote. He suggests that anyone who voted in the previous election, regardless of geographic location, should be entitled to vote in the subsequent election. If someone misses an election, they have to show up to the voting station to renew their “absentee” status.

Personally, I prefer establishing a standard based on visitation frequency. Coming to Israel on a regular basis reflects an ongoing association and involvement which should be the critical feature for an Israeli voter. According to this approach, any citizen who has visited the country during the previous two years should be entitled to vote absentee if they choose to.

Whatever the criterion, studies from other countries with liberal absentee laws suggest that relatively few ex-patriots will actually utilize the right to vote absentee — rarely more than 20 percent. But then again, Israelis abroad tend to be a bit obsessive about Israel, preferring to peruse Haaretz, Ynet (or amongst the elite: The Times of Israel) each morning – before checking out the New York Times.

It turns out, that my new Absentee Voting bill joins a litany of earlier proposals. In a symposium convened by the Israel Democracy Institute in Jerusalem last week, Minister of Diaspora Affairs Nachman Shai described the 2014 absentee voting bill he tried to promote. Shai saw the proposed legislation as a bi-partisan issue, submitting the bill along with Likud MK, David Bitan. Then Labor party chair (and today Israel’s President), Isaac Herzog initially supported the idea, presumably because he found it good for the country – and good for the Labor party. But according to Shai, after a bit of more in-depth thinking, Herzog changed his mind and quietly informed him that the party was no longer behind the legislation. Presumably, Herzog figured that Labor would harvest fewer votes from absentee rights than the competitors.

Naturally, when the issue arises, politicians immediately begin speculations and calculations about how this enormous block of potential could help or harm their party’s prospects. The assumption is that the hundred thousand Israelis in Silicon Valley or Berlin would be good for the Center-Left — while the Los Angeles Israeli community has a right-wing, Likud orientation.

I’m not sure how opening up Israeli elections to ex-pat citizens would affect the outcome. I’m guessing it would be a “wash” between the two political blocks. That’s not the point. The point is that absentee voting would strengthen the country and its connection with the many citizens who find themselves outside the country during elections. And it also would reduce the carbon footprint associated with the many Israelis who fly in for elections with the sole purpose of exercising their right to vote.

Regardless of where they live, most of the Israelis entitled to vote enjoy a significant connection with the country: they have paid taxes, served in the military or are simply the product of Israeli culture and environment. They remain stakeholders, partners worthy of the privilege of participating in our great democratic adventure. Israeli laws should not ostracize them due to geographical circumstances. They need to be embraced.