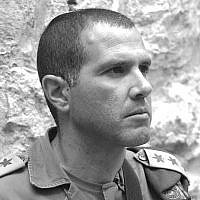 The Blogs
Itamar Ben-Haim
Apply for a Blog
Advertisement
Please note that the posts on The Blogs are contributed by third parties. The opinions, facts and any media content in them are presented solely by the authors, and neither The Times of Israel nor its partners assume any responsibility for them. Please contact us in case of abuse. In case of abuse,
Report this post.

There are not many catastrophes for which, even through the perspective of time, we can find no reasonable explanation. The destruction of the Holocaust is still too shocking to be grasped, and the depths of the damage it caused are incomprehensible. Still, over the years, we hear anti-Semitic voices continuing to call for the destruction of the Jewish people. However, unlike during dark episodes such as WWII, the Jewish people now have a force against those who revile and threaten them, one they did not possess back then – the Israel Defense Forces.

There was a reason why the United Nations, by Israeli initiative, chose the date of the liberation of the Auschwitz concentration camp to be the International Holocaust Remembrance Day. The word “Auschwitz” has become a global concept – a synonym for unspeakable evil and violence. A place where death lurked around every corner, and one’s life was no more than a pale imitation of living. After surviving the hell that was Auschwitz, the writer Primo Levi said this: “Visitor, observe the remains of this camp and consider: whatever country you come from, you are not a stranger. Act so that your journey is not useless, and our deaths are not useless.”

Now, 74 year after the liberation of the camp, Auschwitz stands silent except for the visitors, coming and going freely – while we live by Primo Levi’s command. Our journey, as a Jewish nation and a Jewish state continues fiercely. The attempts to threaten the existence of the State of Israel and the security of the Jewish people are still present. Nevertheless, the IDF stands firm against them, ready to protect Israel at all costs. This stance comes from a moral obligation to the memory of the six million murdered Jews, as well as the many Holocaust survivors living in Israel and abroad.

Our duty, as commanders in the IDF, is to preserve the memory of the Holocaust – both personally and collectively. We are commanded to pass on the victims’ stories, and their hopes to the next generations, to those who will not get to know the people who suffered through the darkest period of human history. We must remember, proudly, the many survivors who chose, with great strength, to come to the Land of Israel, shortly after their right to live safely was taken away from them – merely because of their religion. We must cherish the fact that some of them died protecting this new country only a few years after the Holocaust – because they knew that here, they and their fellow Jews might have a safe home. Today this is our obligation, as an army, to live by their decree; to keep the Jewish nation and its home, the State of Israel – safe.

For those whose lives were brutally cut short, for their voices that were silenced by violence – we will remain vigilant. We will continue to make sure, as Israel’s sword and shield, that we shall never lack abilities or resources to defend our country and ourselves.