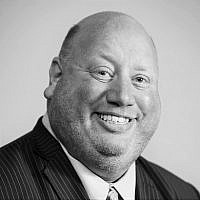 The Blogs
Steven Weiss
Apply for a Blog
Please note that the posts on The Blogs are contributed by third parties. The opinions, facts and any media content in them are presented solely by the authors, and neither The Times of Israel nor its partners assume any responsibility for them. Please contact us in case of abuse. In case of abuse,
Report this post.

Something wonderful appeared on my Facebook feed the other day.
Maybe you happened to catch it. It was a story of lovingkindness, of gemilut chasidim.

But I’ll let the amateur reporter who recorded the whole incident in real time via social media tell it herself:

“..on my flight back to Georgia I saw this man, who was a stranger to this woman, offer to help her because she was pregnant and alone on the flight and her son was upset and fussy. He did not complain, he just told her that he was a DAD, and wanted to help her so she could rest. This MAN walked the aisle most of the flight from Minneapolis to Atlanta comforting this woman’s son as if he was his own…I was in tears…not because he was white and she was black…but because it showed me today that there are still GOOD people out there in a world full of turmoil.”

Why is this story so powerful? What was it about this story that captured hundreds of thousands of “likes” and earned it a mention on a national tv show out of an endless onslaught of stories and tidbits and gossip that comes to us without pause every second of every day on social media?

What, in fact, makes this story news in the first place?

According to the woman who shared this on Facebook, it was because of this man’s goodness in a tumultuous world.

Which is another way of saying, this man’s menschlichkeit.

Because isn’t that what it means when a human being helps others without being asked and without any remuneration?

As we enter into the most holy of Jewish holidays, this heartwarming incident underscored for me the importance of the small actions we take every day. It reminded me of the significance of how we treat one another, particularly when we are under the radar. (Although as this incident shows, the chance of doing anything under the radar in the age of social media is rapidly dwindling.)

But the more I mulled this over, the more I realized that this incident touched so many of us because in an Internet age where we are given front seat passes to so much cruelty and destruction – often in real time – what so many of us crave are more incidents of humanity. We want to feel that even as the world seems to be teetering out of control, that at its core people are basically good.

And with so many images of desperate refugees, victims of gun violence, natural catastrophes, and savagery by people set on turning our world into a blood bath, no wonder we want to feel that there is order and justice and humanity.

No wonder we want to feel that for every act of unkindness, there are two, maybe three, acts of lovingkindess.

As a cantor at a Reform congregation in Massachusetts, such thoughts are very much on my mind this time of year.
In his beautiful book, This is Real and You are Completely

Unprepared, Rabbi Alan Lew (z”l) talks about the transformation and awakening our soul goes through during the Days of Awe.

But one thing that struck me in his guide to these holy days is his statement that “Judaism came into the world to bring the news that the invisible is more important than the visible.”

To my mind, no one symbolizes that divide between the visible and the invisible better than cantors – especially during the High Holidays. Because in our role as emissary on behalf of our people in the pews in appeal to the heavens above, we do much more than just lift our voices in song. As we stand in supplication before the ark of the Torah for hours on end, dressed in a white, flowing kittel (robe), we recite the haunting melodies we’ve all grown to know so well in which we ask our Creator nothing less than, “who shall live and who shall die?”

The high holiday liturgy tells us that through prayer and repentance, we have the power to alter our fate.

But there is another smaller but just as effective way to alter our collective reality: choosing to connect to one another.

All this requires is to pay attention. It means putting down our cell phones or Tablets and looking around. What do we see? Who do we see?

Because once our eyes are open and we are present, like the stranger who captured our hearts by soothing someone else’s child on a long flight, we will see immediately what needs to be done. And we will do it.

Because then we will finally understand that more than just images flitting by on our screens, we are all intricately and inextricably connected in our everyday lives. And in our every day lives we are given infinite opportunities to perform acts of lovingkindness.

As Anne Frank wrote so presciently over seventy years ago: “How wonderful it is that nobody need wait a single moment before starting to improve the world.”

About the Author
Cantor Steven Weiss, the Cantor and Director of Education at Congregation Sha’aray Shalom in Hingham, Massachusetts, is President of the American Conference of Cantors (ACC).
Related Topics
Related Posts
Comments