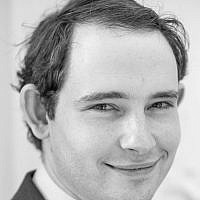 The Blogs
Dan Zamansky
Apply for a Blog
Advertisement
Please note that the posts on The Blogs are contributed by third parties. The opinions, facts and any media content in them are presented solely by the authors, and neither The Times of Israel nor its partners assume any responsibility for them. Please contact us in case of abuse. In case of abuse,
Report this post.

The Russian invasion of Ukraine on 24 February marks a historical watershed, similar to the German invasion of Poland on 1 September 1939. The entire world has changed fundamentally, but many have yet to realise the breadth and depth of the change that has occurred. In Israel, in particular, there is only a superficial understanding of the significance of the crisis.

To understand what is happening and why Israel is in acute danger, it is necessary, at long last, to soberly understand who Putin is. He was a KGB officer, and thus a member of an inherently criminal organisation, the purpose of which was to maintain the Soviet regime by destroying its opponents. Putin’s KGB career culminated in leadership of its Russian successor organisation, the FSB, immediately before being appointed Prime Minister in 1999. As was well known at the time, the FSB openly promotes and endorses the actions of its predecessor organisations, actions which included some of history’s worst atrocities. As one writer put it, “suppose that, after World War II, the West German government had regarded its security forces as proud successors of the Gestapo and SS.” In between his time in the KGB and his later leadership of the FSB, Putin worked in the St Petersburg mayor’s office, where he had substantial interactions with organised crime, including the very prominent and very violent gangster Vladmir Kumarin. Therefore, Putin is part Gestapo man, a completely immoral member of the secret political police, and part gangster. Both sides of his character mean that he will systematically lie to his interlocutors and systematically violate any agreements that others may attempt to reach with him, with no warning and at a carefully chosen moment.

The regime that Putin has built over the last 22 years reflects his criminal background. The similarities between it and Nazi Germany are now obvious. Memorial, Russia’s most important human rights group, which assembled information on the enormous scale of Stalinist crimes, has been banned and is being dismantled. Political opponents of Putin are labelled “extremists and terrorists.” Savage torture of prisoners is widespread and openly tolerated. Now, as Putin wages a Nazi-like war to subjugate a neighbouring state, anyone who will write about this war in a manner which the regime will disapprove will be sentenced to a 15-year prison term. In consequence, Western media, including the BBC and CNN, is fleeing Russia. All of this is being done by a regime which has already committed a long string of murders over many years, including by means of radioactive poison and nerve gas. A system of government which was already criminal and murderous has crossed the final line and initiated the largest war in Europe since the Second World War. Comparisons between Putin and Adolf Hitler are now so obvious and clear that they are being made in the mainstream press.

Given Putin’s nature, Israel’s attempts to maintain a working relationship with his regime were already dangerous. Now, the danger has become exceptionally acute. Russia has been Iran’s most important source of advanced military equipment for many years. Most prominently, Russia supplied Iran with S-300 long-range air defence systems in 2016. Iran has explicitly indicated its desire to make further purchases of advanced Russian weapons, as recently as in the middle of October of last year. Now, Russia and Iran are both pariah states, and this will necessarily lead to greater cooperation between them. Even a former Member of the Knesset has acknowledged that “Russia has nothing more to lose”, so the likelihood that a deeper and more malicious Russo-Iranian cooperation will now emerge is already being publicly discussed. What is not understood by anyone in Israel, or at least by anyone publicly commenting on this matter, is that this malign cooperation could rapidly evolve into a catastrophic danger.

Putin has made explicit threats relating to the possible use of nuclear weapons during the course of the current conflict, and this constitutes a reinforcement of the long-existing Soviet and Russian practice of using such threats to paralyse Western decision-making in a crisis. Now, having run into considerable military difficulties in the war with Ukraine, and therefore finding himself enveloped in a worsening strategic crisis, Putin may take extreme measures. These are available to him as a result of the existing relationship between Russia and Iran, and their now-shared pariah status. With an intent not just narrowly focused on threatening Israel’s existence, but more broadly directed at creating an acute crisis in the Middle East and thereby distracting the West from his invasion of Ukraine, Putin may supply nuclear warheads, and / or the missiles to carry them, to Iran. Precisely because such an eventuality is not a subject of public discussion either in Israel or the West, it is probable that no systematic steps are being taken to prevent Putin from taking such a step.

Russia is already publicly connecting its war in Ukraine to the drawn-out negotiations over Iran’s nuclear programme. Today, Russia’s Foreign Minister, Sergey Lavrov, demanded written guarantees from the West that sanctions now imposed on Russia will not “any way damage our right to free and full trade… and military-technical cooperation with the Islamic State.” Even before this, the Russian representative at the Vienna negotiations, Mikhail Ulyanov, has been consistently helping Iran as part of a deliberate Russian strategy to use Iran’s nuclear programme to create maximum discomfort for the West. As Richard Goldberg of the Foundation for the Defense of Democracies has correctly noted, “Ulyanov is an ally of the Iranians at the direction of Moscow”. Now, it is widely reported that a new agreement with Iran is imminent. If this proves true, the outcome is overwhelmingly likely to be a deal which is extremely good for the Iranian regime, and extremely bad for Israel. Many sanctions previously imposed on Iran will be removed, giving it access to very large sums of money to spend on activities which threaten Israel, while Iran’s nuclear programme will remain intact. All of this is propped up by the Biden’s administration contemptible pretence that “Russia shares a common interest in ensuring Iran never acquires a nuclear weapon.”

For decades, the West and Israel chose to ignore the fact that Putin was systematically constructing a Nazi-like regime. This process began even before Putin himself came to power, and intensified once he became dictator. Already in 1992, irredentist elements in the supposedly liberal Yeltsin regime supported separatists in Transnistria, a region of Moldova which broke away that year in a violent war which would not have happened without Russian support. At much the same time, Russia gave military assistance to the secession of Abkhazia from Georgia. In 2008, Putin invaded Georgia and effectively annexed both Abkhazia and another secessionist region, South Ossetia. In the case of Ukraine, Putin has been attempting to establish a de facto puppet regime in the country since at least 2004. In that year, the pro-Russian candidate Viktor Yanukovych first attempted to come to power, in a rigged election. The resulting “Orange revolution” led to a new election, which lost to the pro-Western Viktor Yushchenko. Facing little Western resistance, Putin did not give up, and in 2010 Yanukovych won a new election. In late 2013, Yanukovych’s pro-Russian policies caused another revolution, and he fled to Russia. In the days following the flight of this man, who had effectively become a Russian puppet, Russia illegally annexed the Crimean peninsula and sent first secret agents and then its regular army into the Donbass, in eastern Ukraine. Finally, by 2015, Putin had become so used to Western weakness in the face of his agression that he did something that even the Soviet Union had not – initiated an expeditionary war in Syria, successfully preventing the collapse of the Assad regime and putting his armed forces in direct proximity to Israel. Successive Presidents of the United States, from George W. Bush, who managed to find Putin “straightforward and trustworthy”, to Joe Biden, whose mind’s eye conjured up a “genuine prospect to significantly improve relations” after meeting Putin just last June, have stood by as Russia became an acute danger to humanity. For now, it is chiefly Russians and Ukrainians who are paying the price for this.

Putin does not intend to stop. He is now openly threatening to put an end to Ukraine’s statehood. Experts are hypothesising that Moldova may become the next country that Russia will invade. Right now, a struggle is taking place in the West, between those who are attempting to give Ukraine the effective military support that it needs to syop Putin, and those who are quite happy to use Putin’s nuclear threats as a pretext to remain aloof and allow him to destroy Ukraine.

Israel’s weak government, possessing a one-seat majority in the Knesset and led by a Prime Minister inexperienced in international politics and large-scale military crises, remains blissfully unaware of the risks that it is running. Bennett’s meeting with Putin is quite exceptionally ill-advised. Bennett may be motivated more by a desire to emulate Benjamin Netanyahu’s real and supposed diplomatic successes, than any rational analysis of the crisis at hand. Putin is very likely to see Bennett’s visit as a sign of weakness and myopia, and initiate a deliberate attempt to extort Israel.

Israel must urgently realise that the similarities between Putin’s Russia and Hitler’s Germany are deep, while the West remains weak and passive, and is still ready to cooperate with Putin, at least to some degree. In very little time and with its limited resources, Israel must concentrate all its efforts, in concert with those of Ukraine, to meet a single vital objective. The West must be forced to understand that further retreat in the face of Putin’s agression is not just intolerable, but catastrophically dangerous. Unless Putin is halted, he is likely to deliberately accelerate the nuclear crisis with Iran, and may even directly supply it with nuclear weapons.

About the Author
Dan Zamansky is a British-Israeli independent historian, with a particularly strong interest in the history of the World Wars and the long shadow these cast over the contemporary world. He believes that the mistakes of the past are being systematically repeated at present, and this process must be urgently reversed.
Related Topics
Related Posts
Comments