Besides the mad dash towards elections following this week’s completion of the cycle of holidays affectionately called “the chagim,” another interesting phenomena occurred which is the number of weddings which took place – both of biblical and regional proportions.

For example, in this week’s first Torah Reading of the Book Genesis/Bereishit (known as Parshah Bereishit), we are introduced to the first couple – Adam and Chava (Eve) and provided details of their background leading up to their wedding so to speak.

And likewise, on the home front, I personally ended up at by mistake at the weddings of six couples taking place at halls within a small radius of each other until I found the “right” wedding to which I was invited! And I know of a number of additional weddings taking place on the night after Simchat Torah.

From the glimpses into these wedding halls, I came to the recognition that the post chagim season is deemed a desirable time for weddings in Eretz Yisrael. I also had an epiphony as to the link between the biblical wedding of Adam and Chava and the  weddings of the couples which were taking place during the same week that the Torah reading concentrates on the union of Adam and Chava.

What Does Adam and Chava Share in common with the Weddings?

As I mentioned in a prior blog entitled Adam and Chava – Beloved Companions Forever, “the Sixth of the Seven Sheva Brachot blessings traditionally recited at weddings, makes reference to this first couple when G-d is asked to “Grant abundant joy to these loving friends (the bride and groom) , as You bestowed gladness upon Your created being (Adam and Chava)  in the Garden of Eden of old.”

In his book Made in Heaven, author Rabbi Aryeh Kaplan describes this sixth blessing as a prayer that the bride and groom have the same joy that Adam and Chava (Eve) had in the Garden of Eden.[1]

What is the Legacy of Adam and Chava for the new couples?

Likewise, while watching the chuppah of the wedding I was actually invited to, I could not help but wonder what legacy did Adam and Chava bequeath to the new couple that could help them create their own Bayit Ne’eman – their marital eternal edifice.

And to a degree, the roots of the legacy are embedded in the manner in which Adam and Chava were created. According to tradition, Adam and Chava  were created as one entity  and separated and re- united under the rationale that “it is not good that the man should be alone; I will make him a help mate for him. [2] In truth G-d made the first shidduch between Adam and Chava and personally attended to that first wedding according to the Midrashim comments.

The actual Legacy– We Are One and Beloved

One insight that the direct involvement of G-d in the wedding of Adam and Chava reveals is that  Adam and Chava are validated as a single unit which forged the origins for a relationship. The specific reference to the gladness of Adam and Chava mentioned above, according to Rabbi Avraham J. Twerski, M.D., in his book The First Year of Marriage, is because they knew for certain that they were a single unit. Referring to the bride and groom specifically, Rabbi Twerski says that “the understanding that their new relationship should forge a single unit is the key to their becoming “beloved.”[3]

This idea of treating each other as the most “beloved” is one piece of marital advice that I believe Adam and Chava would impart to these new couples.

In an article entitled Not Good for Man to be Alone, [4]the author Rabbi Shmuel Goldin, elaborates on the union of Adam and Chava as follows:

“The narrative of Adam and Chava’s creation stands as a monumental lesson concerning the nature of human closeness.

When we understand and are willing to accept the work and sacrifice necessary for the establishment of deep human relationships, when we create relationships based upon mutual trust, we achieve the companionship that is unique to mankind.”

Prayer for the future Well-being of the couple

One of the annual experiences I have during the holiday of Sukkoth is to travel to Tiberius to celebrate my Hebrew Birthday and visit the various gravesites of those of our ancestors especially who had a focus on marriage – prominent among them is the grave site of Rabbi Yonasan Ben Uziel z”l.

As I mentioned in a prior blog entitled The Sweep and Icing on the Cake, according to Zissel’s Kivrei Tzadikim Encyclopedia, Rabbi Yonasan Ben Uziel z”l was a first generation Tana and the greatest of Hillel the Elder’s eighty students. He lived right before the destruction of the Second Temple, authored the Targum on Navi and was considered to be one of the greatest mystics of his generation.

However, for most of us, we identify Rabbi Yonason ben Uziel as the heavenly matchmaker. It is rumored that he never got married himself and before he passed away promised to help all singles that came to him looking for marriage partners. Numerous couples recite stories how they met due to the merit of Rabbi Yonason ben Uziel, after praying at his grave.

This year I had the extraordinary experience of visiting the gravesite and having the almost impossible feat of being the only visitor on the woman’s side as the picture shows. This provided me with the opportunity to pray with full concentration and intensity for the well-being of couples looking for a match and those getting married.

It is my fervent prayer that the couples who I mention here who just got married and for those couples who will or have found their match, that the happiness experienced by Adam and Chava and expressed in the sheva brachot will become the embodiment of each marriage.

And as we make the transition from the Holidays this week to “normal life” it would behoove each of us to reflect on what we are able to contribute to help prospective couples in our society experience the state of feeling “beloved” and two become one in the spirit of harmony and true shalom bayit. And that will make the legacy of Adam and Chava carry forward for generations to come.

The gravesite of Rabbi Yonason ben Uziel known as Amuka 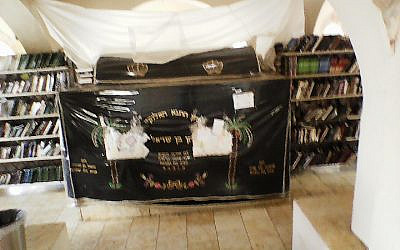 About the Author
Susan Barth is founder and director of Israeli non profit Together in Happiness/B'Yachad B'Osher, promoting stronger, healthier marriages impacting Israeli society. A Project Management Professional (PMP) and businesswoman from the US, Susan sponsored and chaired the First International Conference on Marriage Education in Israel (attended by over 360 professionals) in Jerusalem in memory of her parents and launched I-PREP, an innovative marriage education curriculum. On November 8, 2017, Together in Happiness co-hosted with MK Yehudah Glick a historic Knesset seminar promoting government support for pre-marriage education
Related Topics
Related Posts