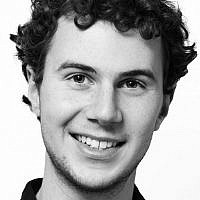 The Blogs
Adam Schapira
Apply for a Blog
Please note that the posts on The Blogs are contributed by third parties. The opinions, facts and any media content in them are presented solely by the authors, and neither The Times of Israel nor its partners assume any responsibility for them. Please contact us in case of abuse. In case of abuse,
Report this post.

Today, with the support of World Jewish Relief, I am launching a campaign to raise £100,000 to support the humanitarian efforts surrounding the Syrian refugee crisis. The money will go toward food, shelter, and clothes. It will provide just a little token of hope amid one of the darkest chapters in modern history.

The Syrian refugee crisis is the most pressing humanitarian crisis since the Second World War. Millions have been displaced from their homes. Thousands have been tragically killed. Thousands more have made the perilous journey across the Mediterranean trying to reach European shores.

11 million of these people are Syrian. And they are people just like you and me. Students, fathers, mothers and children. And they are having to walk across countries, borders, along motorways down roads to paths leading to beaches, leading to the sea, to the boats.

As Benedict Cumberbatch so aptly put it: Nobody puts their children in rubber boats unless the boat and sea are safer than the land.

As Jewish students, we know all too well the history of persecution and forced exile. With the Holocaust still in living memory, we as Jewish students have a unique responsibility to extend our generosity; just as the British government did, providing refuge for thousands of Jewish children nearly 80 years ago. We cannot turn our heads the other way.

The Jewish principle of Tikkun Olam, healing a fractured world, should be at centre of our student activism.

Rabbi Sacks said we are God’s partners in the work of creation: that each act, no matter how small, no matter how insignificant it may seem, can have a profound impact on the lives of those who need it most.

As students, we cannot solve all the problems. But we can do something, anything, to help those most vulnerable.

That is why, as UJS president, I will commit to raising £100,000 to support the humanitarian efforts surrounding the Syrian refugee crisis. It’s ambitious, of course! But working with World Jewish Relief and JSocs from across the country, Jewish students will unleash their dynamism and passion for making the world a little bit closer to what it ought to be. We will unite Jewish students, irrespective of their background or beliefs, and fulfill one of the great Jewish principles in the Talmud, that whoever saves one life, it is if he has saved an entire world.

And that starts today, now. Join me in my campaign to raise £100,000. You can donate £5 to our appeal using the link below and upload a selfie telling us why you care about refugees with the hashtag #refugeesmatter and nominate three of your friends to do the same! Together we can make a difference and transform UJS. Thank you.