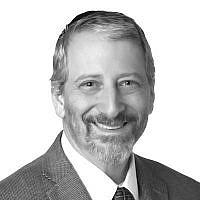 The Blogs
Cary Schnitzer
Apply for a Blog
Please note that the posts on The Blogs are contributed by third parties. The opinions, facts and any media content in them are presented solely by the authors, and neither The Times of Israel nor its partners assume any responsibility for them. Please contact us in case of abuse. In case of abuse,
Report this post.

In 1962, the state of Israel executed Adolf Eichmann, the architect of the Nazi’s “Final Solution.” While we Jews feel pride and a sense of poetic justice of this murderer’s execution for his crimes by our Jewish state, we pine for the “what if” that a Jewish state existed prior to the Holocaust, and this arch criminal could have been killed before he efficiently organized the murder of 6 million of us.

It is hard to not make the comparison of Dr. Mohsen Fakhrizadeh, scientist and head of Iran’s nuclear program, to Adolf Eichmann. Dr. Fakhrizadeh was a senior member (carrying the rank of brigadier general in the IRGC) and true believer of a fanatical regime which has repeatedly called for and threatened the destruction of the Jewish people’s homeland. The only thing that truly has prevented it from doing so—is the means.

Fakhrizadeh, like Eichmann but even more so, was the single technocrat in this rogue regime most capable of providing it with the opportunity at another “final solution” it so passionately desires.

The world may condemn the assassination of  Mohsen Fakhrizadeh as unjustified—for which Israel has already been blamed. Unlike Nazi Germany, there are undoubtedly many Iranian nationals who would like to see this monstrous regime destabilized and overthrown, and Israel should not be the only suspect.

But if Israel did carry out his killing, to condemn it for doing so, would be no different than condemning a Jewish state, had it existed, of killing Adolf Eichmann in 1940—it would be preposterous.

About the Author
Dr. Cary Schnitzer is the Chief Medical Officer for a large medical care delivery organization. He holds a bachelor’s degree in Physics from Arizona State University, Doctor of Medicine degree from the University of Arizona, and a Master of Medical Management Degree from the University of Southern California. Dr. Schnitzer has been an advanced student of Torah study for many years, learning in both the United States and Israel. He is the author of the book: Understanding Adam’s Sin and Its Rectification.
Related Topics
Related Posts
Comments