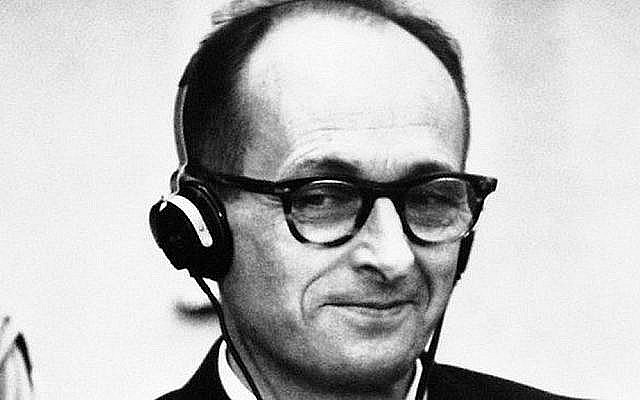 “The incredible spectacle of modernity…of having unified humanity into a global madhouse bursting with stupendous vitality.”
-Eric Voegelin.

Adolf Eichmann is the only high-ranking Nazi commander who not only managed to escape and live comfortably in the seemingly successful exile brought about by his cowardly escape when the Third Reich was left in ashes, but was captured, tried and executed in the newly created modern state of Israel.

For Hannah Arendt, that celebrated German Jewish philosopher and theorist who emigrated to the United States precisely to escape the great slaughter, Adolf Eichmann was not really an anti-Semite and was probably not a psychopath either. However, history proves without any room for revisionism, let alone denialism (although there is such a thing) that Eichmann was a genocidal man who developed and implemented the most developed system of annihilation we know of. A system of mass extermination that ended with one third of the Jewish people and also disappeared millions of others, including gypsies, homosexuals, communists, etc.

In her book Eichmann in Jerusalem, Arendt tries to analyse how a perverse structure can recruit, convince, convert and force men and women to behave in a way that is not human, that is not even rational and that goes against the divine essence that human beings possess.
For the great German theorist Eric Voegelin, who was in absolute opposition not only to Nazism, but also to the entire German culture of the 20th century, Arendt meddled in some of the most virulent events of her time, such as the Eichmann case. Arendt had the courage to do so, but perhaps she went so far that she lost her way. She somehow or other understood or, more than that, gave reason to figures like Eichmann, who is a personification of evil and Hitler for the Jews. Moreover, Arendt never supported the State of Israel, despite her relationship with great Zionists, such as Professor Gershom Scholem.

Arendt also admired Voegelin, not for nothing would she say: “the best historical account of racial thought in the framework of the history of ideas”, this about Voegelin’s book entitled: On the Theory of Races.

For the German theorist, Israel accepts to live in a world without omnipotence and is therefore able to recognise omnipotence as an absence. God is an absence and not a presence, as Christian authors tend to interpret it again and again when speaking of Israel. Thus Voegelin has always been interested in Israel, its formation, history and role in the world. Unlike Arendt, who takes for granted what Israel is and chooses to go into issues that were still developing, Voegelin understands that a figure like Eichmann, who is indeed part of a perverse structure, acted autonomously within that same corruption.

Adolf Eichmann, who had lived in Argentina for more than a decade under the name Ricardo Klement, was captured on 11 May 1960, in the midst of the inaugural Mossad and Shin Bet operation. This operation, known as Finale or Garibaldi, involved Simon Wiesenthal, Rafael Eitan, Peter Malkin and Iser Har’el. The latter, the first director of the Shabak and the Mossad, who responded to Prime Minister Ben Gurion when he found out that Eichmann was living in Argentina: “bring Eichmann to Israel, whatever it takes”.

After the successful Garibaldi operation, Eichmann was brought on 11 April 1961 to trial before the Jerusalem District Court, presided over by Moshe Landau, Benjamin Halevy and Yitzhak Raveh. Moreover, by virtue of the democracy that is Israel, Eichmann had an advocate, the German Robert Servatius, for as Justice Minister Pinchas Rosen said: ‘I think it will be impossible to find an Israeli lawyer, Jewish or Arab, who will agree to defend him’.
The Eichmann trial was covered by the international press. Among the various correspondents, a correspondent from The New Yorker travelled from New York, her name: Hannah Arendt.

Attorney General Gideon Hasner was responsible for preparing an entire record of the Shoah and brought 112 witnesses, survivors of Auschwitz and other extermination camps. Hasner’s work was essential in establishing that what happened in Nazi Germany was not a lie. He said: “It is not an individual who is in the dock in this historic trial, not just the Nazi regime, but anti-Semitism throughout history.

Servatius, Eichmann’s lawyer, prevented all the Holocaust material from being shown, and furthermore tried to vindicate the individual Eichmann for his actions, claiming that he was a bureaucrat, someone who only followed orders. And that was Eichmann’s own defence, claiming that he was just a member of the Nazi party following orders. He claimed that the decisions were not made by him, but by Müller, Heydrich, Himmler and ultimately Hitler.
But, it is absurd to say that Eichmann only followed orders, when it was he who ordered the extermination camps to eliminate the entire Jewish people. In fact, prosecutor Hasner presented evidence that Eichmann had declared in 1945: “I will go to my grave laughing because the feeling of having five million human beings (Jews) on my conscience is for me a source of extraordinary satisfaction.

So Arendt was wrong to talk about the “banality of evil” and try to give reasons to a repulsive figure like Eichmann. Moreover, if he had only followed orders, why did he rise so high in the leadership of the Third Reich?

In the end, Eichmann was convicted of 15 counts of crimes against humanity, war crimes, crimes against the Jewish people (he was also convicted of crimes against Poles, Slovenes and Gypsies) and membership of criminal organisations such as the Gestapo, SD and SS. In fact, one of the biggest criminal records was Eichmann’s, but with great cynicism he claimed his innocence. The judges found quite correctly that Eichmann believed wholeheartedly in the Nazi cause and had been a key perpetrator of genocide.

Eichmann was hanged in a prison in Ramla and according to Rafi Eitan who witnessed and participated every moment from capture to his end, said that his last words were:
“I hope that all of you will follow me”.

On Arendt’s banality of evil, several authors, such as Bettina Stangneth in her book Eichmann Before Jerusalem, counter that he was an ideologically motivated anti-Semite and a lifelong committed Nazi who intentionally constructed a personality as a faceless bureaucrat for his presentation at the trial. Other historians such as Christopher Browning, Deborah Lipstadt, Yaacov Lozowick and David Cesarani share this view that Eichmann was not a thoughtless functionary as Arendt and others believed.

While Eichmann was a bureaucrat, that should in no way justify or excuse him from having ordered the murder of millions of people by means of documents with his signature and approval. Likewise, he could have chosen between right and wrong (as we all can), but he chose the latter, regardless of the consequences.