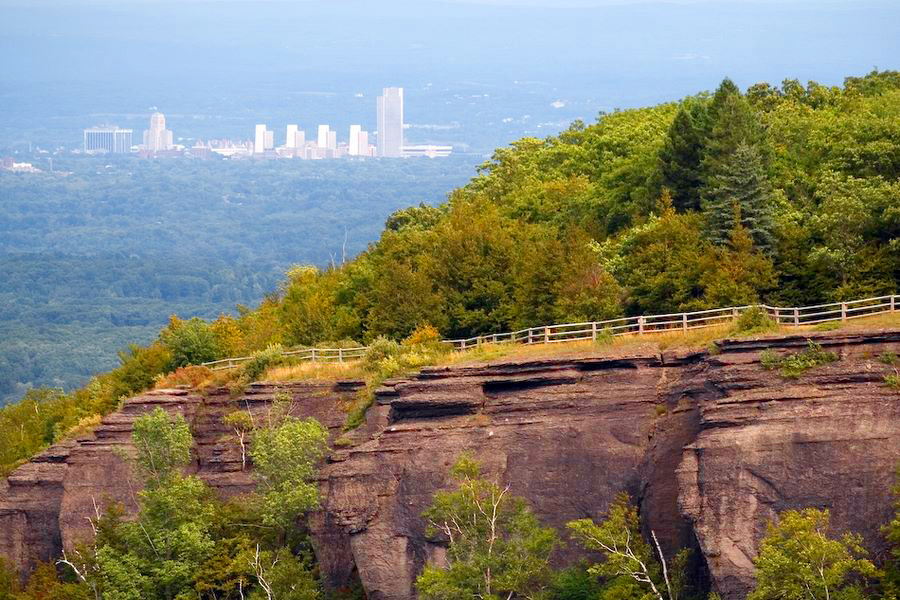 Monday marks 50 years since the beginning of the Six-Day War.  In those early days of June 1967, during the Six Day War, I, along with two of my high school friends would make the 30 minute drive for six consecutive nights along NY State Route 85 to serene John Boyd Thacher Park, the highest elevation located in the Helderberg Mountains outside of our hometown, Albany, New York. We would depart at 11:15pm so we could arrive before midnight.  In those days before the internet and before Ted Turner created a 24 hour news network called CNN, we relied on a portable battery operated short-wave radio which allowed us to hear the English news broadcast of Kol Yisrael, the Voice of Israel. This five-minute live newscast would be aired every night at midnight Eastern Daylight Time and we would anxiously await to hear the latest news delivered by Freda Keet. Freda’s distinct South African accent was familiar to listeners throughout the English speaking world through Kol Yisrael’s overseas radio broadcasts. At the stroke of midnight, we would search the dial and listen for those distinctive seven ‘beeps’ that preceded the announcement:  “This is Kol Yisrael, The Voice of Israel.”

And then, for the next five minutes we would listen attentively, hoping the static would be minimal as Freda Keet gave us up to the minute details of the Six-Day War. Our hearts would be pounding with anticipation as we heard the reports of Israel’s success in overcoming huge odds and defeating three Arab armies.

No one can deny that The Six Day War transformed overnight the perception of the Jewish people and the homeland for the Jewish People, the State of Israel.  The image of Jewish young men and women soldiers defeating the mighty Egyptian, Jordanian and Syrian armies was nothing less than miraculous.  The world was astonished that Israel, the size of the State of New Jersey would be able to achieve the unachievable, the winning of a war against three well-trained armies attacking from three different fronts.

Fast-forward 50 years. How the world has changed since 1967.  The internet and 24 hour cable news have transformed the way in which information is received.  Breaking news is now reported within seconds.  And since the Six Day War, we have seen Egypt and Jordan enter into a peace agreement with Israel.   But still, a peace agreement with the Palestinians appears to be a figment of one’s imagination.  While I am no expert in Middle East negotiations, I had the opportunity to meet a Palestinian who is.  My congregation hosted him last week and his insight into the prospects for a two-state solution was profound.

Ghaith al-Omari is a senior fellow at The Washington Institute for Near East Policy. Previously, he served in various positions within the Palestinian Authority, including advisor to the negotiating team during the 1999-2001 permanent-status talks.  During his talk, he spoke to us of his desire for a two-state solution and emphasized that the Israelis and the Palestinians, as well as countries within the international community, need to “internalize the fundamental diversity inherent in this historically, culturally, ethnically, and religiously rich region, and to adopt policies that encourage appreciation of respectively valid narratives.”  His message was clear:  In order to negotiate a peace agreement, both sides have to take a step back and acknowledge to each other the pain of the past.  While history cannot be revised or rewritten, it needs to be acknowledged and then and only then can a vision for the future be articulated.

Al-Omari gave us another example of how peace can be achieved by comparing Israel’s 1979 peace agreement with Egypt and with Jordan in 1994.  He told us that many years after the conclusion of these two peace agreements, “despite turbulent times and episodes of sometimes severe testing, diplomatic relations have survived.”  And even though Israel, Egypt and Jordan are at peace, he reminded us that “anti-Israel sentiment and even, in some cases, outright anti-Semitism remain widespread among both the public and the elites of these two Arab countries.”

What made these deals possible he told us was not the Egyptian or Jordanian people’s view of Israel but rather, their view of their own leaders. He noted that President Anwar Sadat of Egypt and King Hussein of Jordan enjoyed enough “popular” legitimacy (not to be confused with “electoral” legitimacy) to bring their people along as they made unpopular decisions that the two leaders felt were necessary for their countries’ national interests.  He added:  “If the public’s readiness for peace was the prerequisite of a successful agreement, neither the Egyptian nor the Jordanian deal would ever have been signed.”

Today, with corruption in the Palestinian Authority under Abbas’s leadership and with Hamas controlling the Palestinians in Gaza, prospects for a peace agreement with Israel will remain a tough nut to crack.  Al-Omari summed it up when he said:  “The Palestinian leadership is facing a severe legitimacy deficit due not only to its failure to deliver results in the peace process with Israel but also to its record of poor governance and corruption and its highly restrictive grip on political space. If these issues of legitimacy remain unaddressed, no leader can conclude peace—no matter what the terms of the deal may be. On the other hand, with sufficient legitimacy, a Palestinian leader could do what Sadat and Hussein did.”

After his talk, I told Ghaith al-Omari, that he should consider leaving his position at the think tank in Washington and work to unite the Palestinians. I told him that his voice and his views needed to be heard amongst his people.  His response?  “I am not a politician.”  My response?  “You are a professional negotiator and maybe not being a politician is what the Palestinian people need in order to come to the negotiating table.

There are many who have told me that it is unlikely we will see peace between Israel and the Palestinians in our lifetime. I want to preserve the hope that I will be alive to witness that day. And when that happens, I will look forward to traveling back to Albany along with my two high school buddies to make that drive up that winding road on Route 85 to Thacher Park to reminisce of those miraculous moments 50 years ago and to celebrate another miracle:  two states, Israel and Palestine, finally at peace.