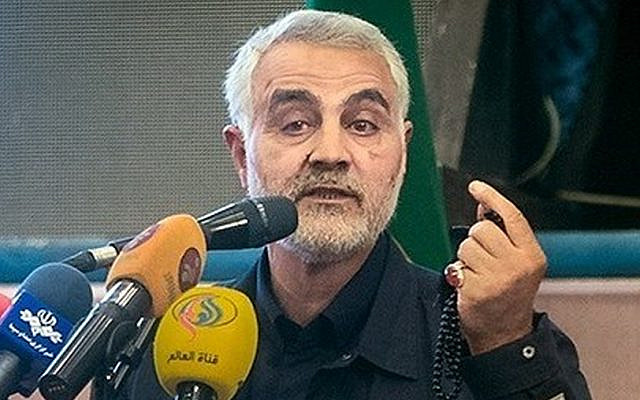 On January 3, the US retaliated for the break-in at the US embassy in Baghdad that was perpetrated by members of an Iran-backed militia a few days earlier. Four US missiles killed Iranian General Qasem Soleimani and Iraqi militia commander Abu Mahdi al-Muhandis. While the explosion of those missiles has long dissipated, the stench released by the hypocrisy that ensued has created a thick fog that has yet to dissipate several days later.

In the month that preceded the assassination of Soleimani, the Iranian security forces of which Soleimani was the head, murdered in cold blood 1,500 unarmed civilians (including at least 17 teenagers and 400 women) whose only crime was to protest against the regime’s economic record, including a hike in fuel prices. Supreme Leader Ali Khamenei had told the security forces, “The Islamic Republic is in danger. Do whatever it takes to end it. You have my order”.

Al Arabiya described Soleimani as a “global mass killer” and wrote, “Soleimani wasn’t just directly and indirectly responsible for the deaths of Americans, but thousands around the world”.

Malak Chabkoun, an op-ed writer for Al-Jazeera, not known as a fan of US President Donald Trump or the US, wrote, “it is inexcusable to ignore the crimes of Soleimani and al-Muhandis and those whom they served. […] The assassinations of Soleimani and al-Muhandis gave some Middle East residents a sense of relief that they have finally been rid of two militia commanders who have brought much suffering to their communities. […] It is hard to cover up the crimes Iran and its regional proxies have committed over the past 10 years. Iran has backed and even advised on the brutal crackdown by the Syrian regime on opposition protests and later the mass killing of civilians through areal bombardment and merciless sieges; it has also sent Afghan refugee children to fight on its behalf in Syria. It has sent military equipment and personnel to the Houthis in Yemen, who just like their enemies, the Saudis and the Emiratis, have been accused of committing war crimes in the Yemeni conflict. In Iraq, they have supported and directed militias which have committed various crimes against Iraqi civilians.”

The assassination of Soleimani was probably inevitable, as the Times of Israel put it, and yet, the assassination of that mass murderer was far more widely condemned than the murder of 1,500 innocent Iranian civilians by the Iranian regime.

Trump is widely mistrusted and for good reason, which likely intensified the fear that the assassination would trigger a regional war, but that was simply speculation whereas the murder of Iranian protesters was real and is almost guaranteed to happen again.

Also, fear of a regional war is somewhat laughable considering that wars are constantly occurring in the Middle East, largely thanks to the Iranian regime that employed Soleimani as its top soldier.

It seems that the main driver behind our inconsistent reactions to those two events is that we are far more concerned about any event, no matter how hypothetical, that could potentially affect us in some way than we are about a real tragedy, the murder of 1,500 innocent people in a country far away that we will likely never visit. In addition to that, we know that protesting the Iranian regime’s actions would be fruitless whereas raising frenetic alarms about Trump’s actions could help discredit him. It is selfishness and opportunism bottled in hypocrisy.

After the Iranian regime retaliated by launching over a dozen missiles at a US base in Iraq, the media wondered whether that would be enough to “satisfy many Iranians’ demands for retaliation against the US” for the assassination of Soleimani. No one, however, seems interested in the Iranians’ anger over the murder of 1,500 of their own unarmed civilians.