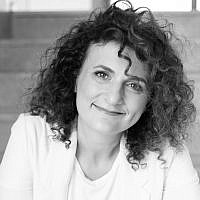 The Blogs
Anna Vainer
Apply for a Blog
Advertisement
Please note that the posts on The Blogs are contributed by third parties. The opinions, facts and any media content in them are presented solely by the authors, and neither The Times of Israel nor its partners assume any responsibility for them. Please contact us in case of abuse. In case of abuse,
Report this post.

Earlier this month, amid the clanging of pots and pans and slicing and dicing, a Ukrainian refugee who recently immigrated to Israel told me that this would be her first time cooking since February 23.

A cooking class may not be the most typical place to process harrowing stories of survival, and yet, that’s exactly what I did as I watched 30 women — all new Russian and Ukrainian olim (immigrants) — meet with fellow Israelis to share their personal stories of strength, wisdom, spirituality, and motherhood.

The day marked a special addendum to the Jewish women’s movement Momentum’s weeklong journey to Israel. The organization brings Jewish mothers from around the world to connect with each other, Jewish values, and the land of Israel, partnering with educational and communal organizations in 34 countries.

These trips are usually saturated with uplifting stories of women from disparate corners of the globe who never would have met were it not for Momentum’s efforts.

But this otherwise ordinary day in May proved to be a unique day for sisterhood. Each and every woman in attendance was a Momentum alum. While they knew what to expect in their first meeting with each other, there was still tension in the air as the Russian and Ukrainian immigrants trickled into our meeting room.

The Russian women, they told me later, were worried that the Ukrainians would view them as accomplices and be hostile toward them at worst, or indifferent to what they had to say at best.

Yet I saw the Russian participants visibly relax when the Ukrainian women assured them that they aren’t holding them personally responsible for the war. They conveyed that if anything, although the circumstances that led to their Aliyah are different, Ukrainian and Russian women can now find common ground starting anew and rebuilding their lives in Israel. Back home, their countries are enemies. But in Israel, against all odds, these women are sisters.

This powerful message underscores Momentum’s mission, which cuts through cultural and linguistic barriers and brings a diverse array of women together based on a common denominator: their Jewish heritage and, in the case of mothers, a dedication to their children.

The Ukrainian women escaped with barely anything — a hastily packed suitcase or backpack, and the bare essentials.

Meanwhile, the Russian women left knowing that they will most likely never be able to return. While they are not the perceived victims in this narrative, their stories are often overlooked, even though they too had their lives uprooted and fled into the unknown.

Iris Grinshtein, from Ukraine, described the heartache of being able to take just a backpack with her to Israel, including only one pair of shoes. Another Ukrainian woman shared a story about having to wear adult diapers on a bus transporting refugees, which did not make a single stop for 35 hours until reaching safety in Romania.

Despite their tribulations, all of the women exalted the Jewish value of arevut hadadit — mutual responsibility. Many of them have volunteered their time to help others, even though they currently have limited resources themselves. These are women like Chani Maskevich from Zhytomyr, Ukraine, who coordinates medical supply deliveries from her absorption center in Israel, where she still lives; Oksana Shulha from Sumy, Ukraine, who remotely manages a team of workers who take care of the elderly in her bombarded city; Alina Stepanova from Moscow, Russia, who provides free mental health consultations to refugees; and Olga Moshe from Beit Shean, Israel, who put together a volunteer network for new olim across the Jewish state. As a woman, I was deeply touched by the resilience of these mothers, from both countries.

But as someone who moved to Israel from Ukraine 30 years ago, it reminded me of the aliyah of my family, and how lonely and disconnected my parents felt, envious of others who had relatives or at least close friends, in Israel. Having a bond with a local Israeli could make all the difference in navigating the turbulent Israeli reality during their formative years as new olim.

The Ahayot (Sisters) program we started that day for Ukrainian and Russian alumni accomplishes just that, offering a long-lasting opportunity to connect with local Israeli Momentum participants, learning, and volunteering with their sisters by choice.

The day culminated in a gala event where this small, intimate group from Russia and Ukraine joined more than 300 women from across the globe who took part in Momentum’s latest trip to Israel, celebrating womanhood and Judaism in English, Spanish and French. Watching them dance to “Od Yavo Shalom Aleinu” with the Israeli flag waving resolutely behind them, I hope that the embrace by Momentum’s global community of alumni would make them feel a step closer to being at home long after these ephemeral moments are over.

I’m proud to be part of an organization like Momentum which understands that the gift of building close relationships is the most critical thing we can do for these women. And on that balmy day, I could say with full confidence nothing was not lost in translation.