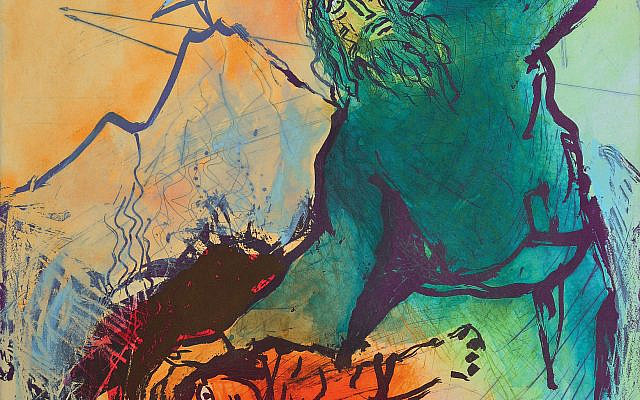 Michael Frayn’s 1998 play, Copenhagen, concerns a meeting between two great physicists, Niels Bohr and Werner Heisenberg, in 1941 in Copenhagen. In this play, the spirits of Heisenberg, Bohr, and Bohr’s wife, Margrethe, come together in the afterlife to answer Margrethe’s question, “Why did Heisenberg come to Copenhagen?”

Bohr and Heisenberg worked closely together in Copenhagen in the 1920s while developing atomic physics, resulting in the formulation of quantum mechanics. Bohr was already an accomplished scientist when the young German Heisenberg joined his group, and Bohr began mentoring him. Heisenberg became one of the leading figures in formulating the new quantum mechanics. Later, Heisenberg joined the group of German physicists developing nuclear weapons for Nazi Germany. Why did Heisenberg return to Copenhagen in 1941? Denmark was at that time already occupied by Germany. Did he intend to express to his former mentor, Niels Bohr, his moral objections to physicists working on nuclear weapons? Or perhaps to pick Bohr’s brain about whether such weapons could, in principle, be developed? Or maybe to hint to Bohr that he knew that nuclear weapons could be and were being developed? In the play, after their deaths, the two men have different recollections and interpretations of that meeting. Every time they disagree on what happened, they scrap that version of events and write another draft of what had happened. The historical question of whether Werner Heisenberg intentionally sabotaged Hitler’s efforts to develop an atomic bomb or actively participated in these efforts is still debated by historians of science.

Quantum mechanics, which Heisenberg helped to develop, is ruled by uncertainty. The theory cannot predict the outcome of an experiment. It can only predict the probability of each outcome. In the many-worlds interpretation of quantum mechanics, all possible outcomes are realized, but in different universes. Whatever could have happened does happen somewhere, in one of the universes. Although critics maintain that the play Copenhagen occurs outside space and time, more likely Frayn structured it according to the many-worlds interpretation of quantum mechanics, with various versions of the conversation between Heisenberg and Bohr playing out in different branches of the universe. At the end, the question posed by Margrethe, “Why did Heisenberg come to Copenhagen?” is never answered and remains uncertain—very fitting when writing about the discoverer of the uncertainty principle.

Let us imagine that we are in Copenhagen and Margrethe asks her husband, Niels Bohr, another question, “Did Abraham sacrifice his son, Isaac?”

In one universe (our universe), Abraham did not kill Isaac, because the angel stopped him. Abraham offered a ram instead. How do we know that? The Torah tells us so—this is the plain meaning of the text. This version requires no further proof.

According to Kabbala, this is what happened in the case of Isaac. When Isaac was born, he received the feminine aspect of his soul.[1] According to the Zohar, this is why he could not get married. His future wife, Rebecca, could not be born, because her soul was the feminine aspect of Isaac’s soul, which was trapped in Isaac’s body. According to Kabbalists, God had to orchestrate the Akeida—the Binding of Isaac—just to swap Isaac’s soul with its male counterpart. Just as with an organ transplant, the surgeon must put the patient to sleep while transplanting the organ that saves the patient’s life, and so too God had put Isaac to “sleep,” as it were, to perform a soul transplant. Kabbalists tell us that it was a double transplant—when Isaac expired for a moment and released his soul, God replaced it with the male aspect of his soul. At the same time, the female aspect of Isaac’s soul that was released from him got incarnated in his future wife, Rebecca, who was born at that time, as the Torah informs us immediately after the story of Akeida, “And Bethuel begot Rebekah” (Genesis 22:23). The standard interpretation is that Abraham did not ultimately slaughter Isaac, but Isaac did not know this and accepted his fate, and his soul left him before Abraham had a chance to slaughter him.[2] Be that as it may, in that universe, Isaac died, even if for a moment, and was revived again. At the very least, Isaac went through a near-death experience.

In yet another universe, Abraham went through with sacrificing Isaac. Not only was Isaac indeed slaughtered, but he was also burned as a burnt offering. How do we know that? Mishna states that on public fast days, it was customary to place some ashes in the Ark as a reminder of the “ashes of Isaac.” The classical biblical commentator Ibn Ezra,[3] in his commentary on Genesis 22:19, cites the opinion that Abraham did slaughter Isaac, who was later resurrected from the dead. The midrash says that Isaac’s ashes lay in front of God. Even Ezra rejects this opinion as contrary to the plain text of the Bible. Indeed, the Talmud interprets this opinion allegorically. Rabbi Elazar ben Pedat teaches that even though Isaac didn’t die, scripture treats him as if he died, and as if his ashes were piled onto the altar (Midrash HaGadol Genesis 22:19). The Talmud notes that the Jews who returned from Babylon to build the second temple knew where to place the altar because they saw the ashes of Isaac piled up just in the right spot. A metaphor? Perhaps. Or it may have happened in another universe.

Back to Margrethe’s (hypothetical) question, “Did Abraham sacrifice his son, Isaac?” As in the play Copenhagen, it remains uncertain. When you have many worlds and many parallel universes, everything is possible. But the story of the Binding of Isaac is a dramatic metaphor for the many-worlds interpretation of quantum mechanics.

[1] According to the Zohar, Isaac received the soul from “the feminine world,” that is, he received the feminine aspect of his soul. According to Shem MiShmuel, this is hinted in the angel who delivered the good tiding to Abrham. The angel said, “Sarah will have a son,” and not, “Abraham will have a son.” From this, it is understood that Sarah’s son would have a feminine soul. Moreover, according to the Ari, the feminin aspect of Isaac’s souls was the reincarnation of the soul of Eve. The male aspect of Isaac’s soul was reincarnation of the soul of Abel, Eve’s son killed by Cain. (See, for example, Rabbi Yistzchak Ginsburg, “Isaac: Laughter and Metamorphosis,” Yeshivat Netzach Yisrael, Jerusalem, May 7, 2017, www.inner.org/wp-content/uploads/2019/11/Isaac-Laughter-and-Metamorphosis.pdf (retrieved 11/8/20).

[2] According to the Ari, the soul of Abel (Hevel) began to enter Isaac even earlier, on the way to the Akeida. When Isaac questioned his father, Where was the lamb of the sacrifice, Abraham answered, “And Abraham said: ‘God will provide Himself the lamb for a burnt-offering, my son.’ So they went both of them together.” The words “the lamb for a burnt-offering, my son,” when written in the original Hebrew—haseh leolah bni—spell out the name Havel (Abel) as the acronym of this phrase (the first letters are heh-lamed-bet, whereas Hevel is speeled heh-bet-lamed—the same letters but in a different order). The conclusion of this verse is, “So they went both of them together.” As Rashi and other biblical commentators point out, the word “together” indicates that Isaac understood and accepted his fate.