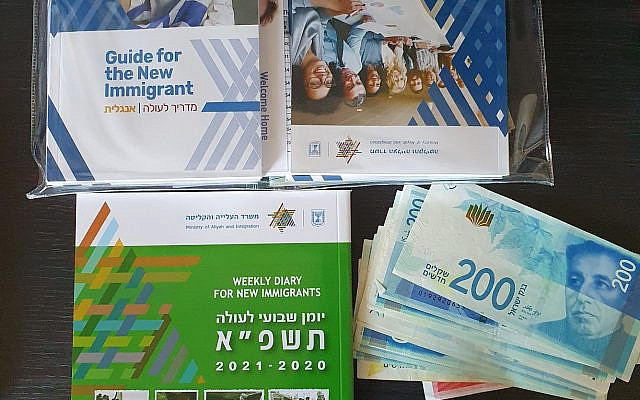 Back to the Future!

This just may be the best time to make Aliyah to Israel in our lifetimes. Last summer I embarked to Israel on what Nefesh B’Nefesh labels a pilot trip — renting an apartment in the small Negev town of Mitzpe Ramon. At the time I had not been thinking of my move as a pilot trip in preparation of a permanent move, making Aliyah in the parlance of Israelis describing new immigrants, it was rather meant as an extended sojurn of grieving and healing. Both of my parents had passed away, 18 months apart, and the pressures of caregiving during their extended physical and mental declines had taken a tremendous toll on the extended family. Living in Israel, especially immersed in the quiet beauty of the Negev, appealed to my need for space from my native Colorado.

Almost immediately as I met Mitzpe community members, it was assumed I had made the permanent move and they were very curious why I had selected this uniquely situated town to settle. After being confronted by their curiosity I found myself considering the Toltz family history which preceded my personal attachment to Israel.

Both my parents were second generation Coloradans, their grandparents had left small towns in eastern Europe at the turn of the 20th century to seek a new safer life with opportunities unlimited by religious persecution prevalent in their home countries. How and why they chose to venture more than half way across America to settle in the new frontier of Colorado remains a mystery, but I’ve always felt fortunate they did. Most stories passed down from those early Jewish immigrants were of the attractiveness of a large state with a small population of miners, ranchers, farmers and traders spread out in small towns. If there were enough Jews to warrant building a synagogue the new residents would write friends and relatives back in Europe that Jews were welcome in Colorado and they should consider skipping the crowded east coast and venture to Colorado. The clear high-altitude Colorado climate was also a draw as it became known for the healthy effects on sufferers of asthma and other respiratory illnesses, including children’s tuberculosis, thus the founding of National Jewish Hospital in 1907.

It must have taken tremendous courage and resiliency by this hardy first generation of Jewish immigrants to America who spoke no English, to travel from New York City’s Ellis Island directly to Colorado, but I am sure happy they took the risk. This was the same era that early Zionists were organizing and encouraging eastern European Jews to share their vision of a new Jewish homeland in the ancient land of Israel, then governed by Ottoman Turks as part of the Syrian district. By far the vast majority leaving their eastern European homes chose north America, which appeared to be a much easier life with greater economic opportunities. However, the concepts of Zionism and Jewish peoplehood had taken hold among many including my family members. Indicative was my great grandparents naming their first-born son, my grandfather, Israel Toltz.

My father Warren Toltz Denver-born in 1929, chose to follow his father’s lead at a young age. In addition to giving and raising money for multiple Jewish organizations he fully immersed himself in both Jewish communal and Denver civic efforts including leadership roles with Allied Jewish Federation of Denver, the local affiliate of United Jewish Appeal. My mother Ruth Bugdanowitz Toltz grew up in Denver in similar circumstances. Her parents and extended family were also entrepreneurs most significantly in the cattle industry (Jewish cowboys) and founded Denver’s first dry cleaners which continues to thrive today is in its 3rd generation of family ownership.

Still with all this extended family involvement as leaders of the local Jewish community, no one ever mentioned or even considered Aliyah to Israel, until me! The journey to Israeli citizenship began over 43 years ago when as a student at the University of Colorado, I chose the junior year abroad program at Hebrew University’s Rothberg School for Overseas Students. Already having a well-developed interest in politics and government, I arrived in Israel just weeks after the landmark 1977 elections which resulted in the Labor Party’s defeat (marking the beginning of a long extended decline) and elevation of Menachem Begin to prime minister. Just months after arriving my fellow students were caught up in the optimism and excitement of Egyptian President Anwar Sadat’s historic trip to Israel and address to the Knesset.

Those were heady days for Israelis, and I will never forget the scene as people lined the streets, waving Israeli and Egyptian flags and commemorative edition of the Jerusalem Post welcoming Sadat to Jerusalem celebrating the prospect of peace between Israel’s most implacable foe, who just four years earlier had invaded Israel in coordination with Syria seeking retribution for the embarrassing loses resulting from 1967’s Six Day War. In my mind that is the Israel I will always remember. An Israel yearning for peace the imagined state where Israel would be accepted as a legitimate Jewish homeland, regional partner and example of democracy, equality and tolerance in a region emerging on the world scene largely fueled by resources which endless world demand for crude oil provided.

While my junior year of college did change the trajectory of my life, moving to Israel permanently was not attractive to the 21 year-old me. But working on behalf of American political support for Israel did appeal to my political interests and upon my 1979 graduation from University of Colorado I ventured to Washington, D.C. to take an entry-level position at the very small, yet nimble low-profile organization called American Israel Public Affairs Committee (AIPAC). Through AIPAC I had the opportunity to return to Israel several times which had developed an initiative of hosting members of Congress from both political parties to Israel for briefings and tours bringing the security reality faced by Israel into better focus.

Fast forward to 2016 with another significantly moving experience called the Israel Ride. To celebrate my 60th birthday I was seeking a physically challenging and meaningful experience to mark the occasion. Somehow, I had learned of this multi-day unique fundraiser which entails bicycling from Jerusalem to Eilat to benefit the Arava Institute, located in the heart of the Israel’s Negev at Kibbutz Ketura. I emerged successful, physically challenged and exposed to the beauty of the surroundings viewed at a slow pace from the seat of a bicycle. Israel Riders spend Shabbat in Mitzpe Ramon which struck me as a throw-back town reminiscent of 1970s Israel.

When the instinct struck a few years later to uproot my established Colorado life and relocate my home for an extended period of grieving, by finding both a change of scenery and immersive experience, Mitzpe Ramon beckoned. In the Spring of 2019, I sat down with my mother who was in a steep mental, emotional and physical decline after the loss of her husband of over 60 years to tell her of my intention (unaware she would die just 3 months later) her positive, enthusiastic and supportive reaction was a very pleasant and welcome surprise. At that point, the idea became a real possibility which I embarked just a few weeks after her death.

The emotions which arose on a nearly daily basis last year caught me by surprise. Everywhere I went seemed to call forth memories of both my own and my parents experiences and attachments to Israel. From the very first day when the regional mayor of Ramat HaNegev hosted me in his offices with stories of my parents visits I was struck by the karma of my selection of the Negev as the place to grieve their loss. Mayor Eran Doron, CEO Adva Lloyd and liaison to sister cities Jared White all made sure I knew of their fondness for my parents and sister who had not only visited but led partnership investments from Denver’s JewishColorado and new sister-city Boulder, Colorado.

Ramat HaNegev’s legendary founding leader Schmulik Rifman had visited my parents house in Denver and made a hugely positive impression before his untimely passing in 2017. As the tears rolled down my cheeks, I was greeted as a member of the extended family and made to feel right at home. My friends at Ramat HaNegev will never know how much their warm memories meant to me in my time of grief.

But the real surprise struck me when I returned to the US late last year, for a visit to my daughters who both relocated to Washington state after finishing graduate degrees. I knew almost immediately how much I missed living in Israel. Then to all the world’s surprise the Coronavirus pandemic struck and returning to Israel on a US passport became impossible. Enter Nefesh B’Nefesh.

Founded by Floridians, Nefesh B’Nefesh serves to fill the gap between prospective olim and the complicated bureaucracy of the Israeli government’s various ministries which oversee immigration and absorption. While I knew of the famous Law of Return, it was a daunting task to navigate the complex process of actually qualifying and receiving acceptance of Oleh status and — in the time of COVID — return to Israel.

Upon application via Nefesh B’Nefesh a file was opened for me with the Jewish Agency of Israel, and Aliyah coordinators assigned from both entities. Leah Tabak at NBN and Ellen Deker at the Jewish Agency have been my guides and support system over nearly a year of collecting and supplying all the documents required under the Law of Return to obtain Israeli citizenship, and thus return to Israel in 2020. In addition, the Jewish Agency Schlichim assigned to Colorado Osnat Fox and Itai Divinsky played key roles as supporters during a sometimes frustrating process. Once my file was complete, every document notarized and apostille acquired my application was submitted via the Israeli consulate in Los Angeles which obtained my Aliyah visa from the Ministry of Foreign Affairs and Ministry of Aliyah, a process which took over 8 months.

It has been reported that a significant increase in both inquiries and applications for Aliyah have occurred in 2020, which did not surprise me as living in the USA this past year and observing the worldwide devastation the Coronavirus pandemic has caused, changes perspective on the urgency of living a meaningful life. New olim to Israel still receive significant financial benefits for moving to Israel as a new citizen and the role played by Nefesh B’Nefesh make navigating a daunting process reasonably achievable. When I finally received the email that my Aliyah visa had been granted I felt both relief and exhilaration.

Having just arrived on December 9th — and accepting 2 weeks of quarantine — plus a marvelous Ben Gurion airport welcome, my new home is within sight! This is a uniquely complicated time to make Aliyah so I encourage my friends in Israel’s government to consider streamlining this process to take full advantage of the interest of prospective olim. Now is the time!