The Blogs
Joel Moskowitz
Apply for a Blog
Please note that the posts on The Blogs are contributed by third parties. The opinions, facts and any media content in them are presented solely by the authors, and neither The Times of Israel nor its partners assume any responsibility for them. Please contact us in case of abuse. In case of abuse,
Report this post. 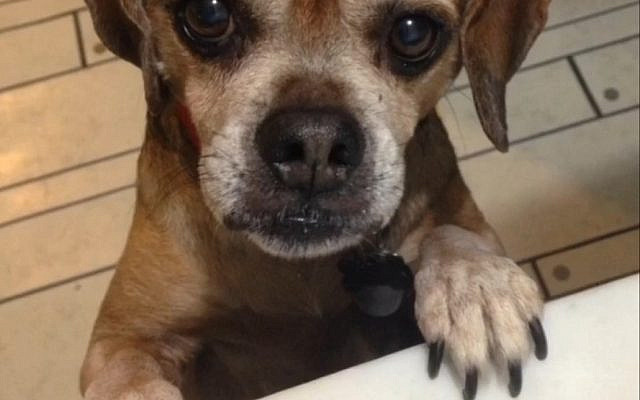 About 15 years ago a business associate stopped by my office and asked if I would like to rescue her 4-month-old puppy. I say rescue because she and her boyfriend had moved in together a few months before and bought what was then a very popular designer cross breed called a puggle (half pug, half beagle). She went on to explain that she and her boyfriend had broken up, he moved out and as a single woman living alone did not feel she could care for the dog adequately. She showed me a picture of the pup and pulled out a People Magazine that showed Brad Pitt holding his puggle.

I was not a dog person. I love dogs but never had one. There were no dogs on either my mother’s side or my father’s (don’t know if dog aversion is an Orthodox thing or Eastern European thing) so I had no experience caring for a dog. While my wife grew up with a dog in her family, I had no real idea what I would be in for. But the picture was so cute and my friend was looking for a good home for the dog and seemed genuinely stuck. It was almost Chanukah and I thought Bailey would make a terrific gift for my youngest child who was 9 years old at the time, so I said yes I would take her.

My business partner, who had an office close to mine heard the exchange and came running into my office. He wisely told me that you can surprise your wife by bringing home jewelry or even a car but not a pet and certainly not a puppy who hadn’t yet been housebroken. I took his advice and convinced my wife to come with me to pick up our potential newest family member. We both fell in love with Bailey instantly and took her home to be welcomed by us and three excited kids.

Back then it was still acceptable to train your dog by rolling up a newspaper and bopping her on the nose or by returning her to the spot of the accident and very strongly saying no, no, no! Harsh by today’s standards as I know from my kids incessantly reminding me and the tons of books that show you how to train your puppy via tone and positive reinforcement. I’ve seen both methods, mine was much quicker and more effective, just saying. Unfortunately or perhaps very fortunately, my chosen methodology, like spanking a child is out of fashion.

Whatever your judgement of me for admitting to my canine “abuse,” my training of Bailey resulted in me being the alpha. Bailey didn’t always listen to commands given by my wife or kids but she sure as heck did follow mine. I could let Bailey run around our ungated yard and she would not dare run away but if anyone else in the family did she was off to the races. Once while I was recovering from serious surgery someone let Bailey out, she ran away and was hit by a car while crossing a busy street. A neighbor saw it all and brought a very injured Bailey home to us. My kids were bawling as my wife wrapped her in a blanket and rushed her to the vet emergency room. It was while in pain, bandaged up lying in bed that I then realized that Bailey was loved more than I was. Thankfully, it was “just” a broken paw and she recovered just fine.

As Bailey got older my relationship with her matured. She still required the periodic belly rub which she let me know she wanted by lying on my bed and turning on to her back as best she could. But the real connection was just on her wanting to be wherever I was; the couch, the dining room table, the kitchen, my bed. Until very recently she could hear me going to the kitchen from the farthest reaches of the house. Knowing that I was a complete sap, she would just turn her head a bit sideways in her best “look at how cute I am face” and I would have to find some scraps to give her.

She loved our bed and we indulged her preference to sleep in it with us. Occasionally, in the middle of the night she would place herself in weird places like between my wife’s pillow and mine. I’d have to pick her up and put her in the doggie bed, as soon as I fell asleep she’d climb right back in to our bed. I’m guessing my snoring was the cue for her to come back. Two and a half years ago I was in a bad accident that necessitated shoulder surgery. My arm was swollen and my hand grossly discolored. Bailey would curl up next to me and lick my wounded hand. I understand that dogs possess a certain sense that can tell when you are sick or injured and they exhibit sympathy to you.

In a non Covid world it would be an arduous process to bring a pet with you on aliyah, during Covid it’s nearly impossible. Additionally, Bailey is old. She’s too big to hold on the plane and too frail to be anesthetized and placed in cargo. There are all sorts of restrictions and prerequisites that Bailey would not qualify for and the question became what will we do with Bailey. I was getting ready to scrap the whole aliyah thing and I’m guessing there are those that would have done just that. Bailey is family and frankly earned the right to die in my arms, giving her up would just break my heart and at this late stage of her life it would simply break me.

One of my children is married with kids and a dog of her own. My son is single, lives down south and has a schedule that is not conducive to caring for a pet. My youngest and her boyfriend have a dog of their own. So my wife and I (mostly my wife)  searched for a doggie retirement home and we thought we found one in upstate NY. The woman who ran the place told us bluntly that she prefers dogs to humans which isn’t a great segue to building rapport with the humans about to give up their canine. Still, the facility was nice, had plenty of outdoor space and seemed professionally run. My daughter went to visit the place to interview the woman in charge and immediately vetoed the facility and the proprietress.

The issue gained urgency as we had packed up all of our belongings and sent them to storage to await shipping to Israel. We moved out of our apartment to move into temporary digs. Finding a short term furnished rental in New York City that accepts dogs is problematic on its own and if you find one, there are additional fees that can be prohibitive. I was thinking that I might have to override my daughter’s veto and reconsider the bucolic doggie retirement home with the nasty director in upstate NY but my daughter insisted that she would find Bailey a proper home or keep her until she did.

As the clock was about to wind down, my daughter miraculously found us an amazingly sweet and caring woman (in Massachusetts) to take Bailey in and give her a comfortable loving home for the time she has left. Bailey has arthritis, difficulty walking, cataracts, hearing loss, gets periodic seizures, is sometimes incontinent and is often in obvious pain. We wanted to make sure she knew what she was getting into, that we wanted to still be in Bailey’s life and involved in any medical decisions. So we interviewed her via Zoom and we got the assurances we needed to give Bailey up. We knew instinctively that if Bailey couldn’t be with us, where she was going was the next best thing.

Parting with Bailey was one of the hardest things I have ever had to endure. I was depressed and cried and still live with a great sense of guilt and loss. My wife and I will open a door, or get into bed, or go for a walk and turn to each other and notice Bailey’s absence. Selfishly, I somehow hoped that Bailey’s end would conveniently come before we leave for Israel, that I’d be able to drive up to New England, hold her, hug her, rub her belly and kiss her one last time. Then I would peacefully watch as the Dr. put her to sleep and I’d have closure. But Bailey, despite her ailments is not ready to go on to the next world. Being 6,000 miles when the day does finally come will be hard for me. It will bring back my guilt and depression.

These are the decisions we make. Decisions have consequences and sometimes those come early on in the process. As the weeks since my separation form Bailey pass I am able to compartmentalize my feelings and keep my eye on the final goal, to get to Israel as an oleh chadash, a new immigrant. I don’t know that I’ll be able to adopt another dog any time soon. I certainly won’t so long as Bailey is still alive, it would seem wrong to me. I wonder if when she dreams or has time to ponder, that she thinks of me, that she wonders what happened to me or hopes she will see me again. More importantly, I hope somewhere in her doggie neshama, she realizes how much I love and miss her and how thankful I am that she is still alive.

About the Author
Joel Moskowitz is a businessman and writer who lives in New York City but not for much longer. He and his wife are almost done with the Aliyah process and are moving to Israel where they plan to live permanently.
Related Topics
Related Posts
Comments