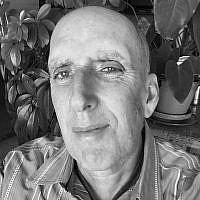 The Blogs
David Joel Orenstein
Apply for a Blog
Advertisement
Please note that the posts on The Blogs are contributed by third parties. The opinions, facts and any media content in them are presented solely by the authors, and neither The Times of Israel nor its partners assume any responsibility for them. Please contact us in case of abuse. In case of abuse,
Report this post.

My father is 87. A retired pharmacist, a husband and a dad, Age is taking its toll. He ambulates slowly with a cane and many of the who’s, what’s and where’s of recent events now escape his memory. His still functioning right ear performs sufficiently with the help of a hearing aid. Dad’s remarkable sense of humor, however, is as sharp as ever. He has always been jocular in a warm way, entertaining those around him since childhood. At fourteen, a schoolmate scribbled in his yearbook: “Good luck to a witty screwy dewy!” Another wrote: “To a funny kid!” One classmate observed: “A guy who laughs, jokes and is a pretty swell guy after all!”

Dad’s mother came from a family that produced pious Jews, doctors and lawyers. His father’s family carried genes that endowed comic brilliance. Dad’s Uncle Harry, an immigrant from eastern Europe, started off his career in America hawking newspapers in Milwaukee shouting: “Extra, extra, read all about it! Big train wreck on Lake Michigan!” and, “Murder! Murder! She killed him because she loved him!”

When I was a little boy, Dad’s sense of humor often sailed right over my head. Puzzled by the master bedroom’s seemingly exclusive content of Mom’s lady like things, I asked, “Daddy, where do you sleep at night?”  To which he replied, “Outside on the kitchen table!” And in the backyard my siblings and I would gaze at the airliners flying above and ask, “Daddy, where is that plane going?” To which he would answer with an air of both expertise and playfulness: “Oh, that’s United Air Lines flight 55 heading from Oshkosh, Wisconsin to Kathmandu!”

Dad had his not so funny moments. Often unable to understand or relate to children, my proclivity for mischief elicited many a “God damn it!”  and “Oh for Christ’s sake!” But I think he just wanted me to be a mensch. He loves our mom and has never been bashful about expressing his affection for her. It was fun to watch him rub his unshaven face against her cheek and watch her laugh and shout, “Sammy, stop it!” He still treats her like a queen.

Now, in the thick of his eighties, there is loss of some ability to express himself. Yet his good-naturedness and optimism remain. His current response to the challenges of aging, “Life goes on…”  And those around him are blessed that his sense of humor is as strong as ever. Preparing for a visit to the barber, he begins itemizing necessities for the trip: “I’ve got my marbles, I’ve got my wallet, I’ve got money,” and then bursts into sing-song mode crooning from George Gershwin, “I’ve got rhythm!” And as we head for the barber shop, Mom implores her hunched over husband, “Sammy, stand up straight!” To which he retorts, “I am straight! It’s the world that’s crooked!”

About the Author
I was born in Milwaukee, Wisconsin, grew up in Los Angeles, and worked and studied for a year in Israel before beginning my adult life. I enjoy writing poetry and essays about surviving childhood brain cancer, climate change, peace in the middle east and many other subjects.
Related Topics
Related Posts