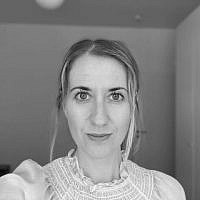 The Blogs
Monika Hübscher
Researching Antisemitism in Germany and on Social Media
Apply for a Blog
Advertisement
Please note that the posts on The Blogs are contributed by third parties. The opinions, facts and any media content in them are presented solely by the authors, and neither The Times of Israel nor its partners assume any responsibility for them. Please contact us in case of abuse. In case of abuse,
Report this post.

How the (German) Far-Right Instrumentalizes the Fight against Antisemitism

In Israel, a party called “Alternativah L’Israel” (Alternative for Israel) will stand in the next Knesset election on November 1, 2022 – at least if you believe the statements of Marcel Yaron Goldhammer, member of the far-right German party Alternative für Deutschland (AfD). As of the publication of this blog, a party named “Alternativah L’Israel” has not yet been registered. According to Israeli law, this is still possible until September 1, 2022. Goldhammer, a former member of ex-chancellor Merkel’s Christian-Democratic Union (CDU) and its youth organization Junge Union, left the CDU to become a member of the far-right AfD some time ago. The AfD is currently being surveilled by the Office for the Protection of the Constitution after it was categorized as a ‘suspicious right-wing extremist entity’ (rechtsextremer Verdachtsfall) and further a suspected threat to democracy and the German constitutional order. Moreover, researchers and experts on right-wing extremism attest to the AfD´s antisemitic, anti-Muslim and Islamophobic, misogynistic, racist, anti-queer, homophobicand conspiracy tendencies.

Additional to his ordinary AfD membership, Goldhammer is currently deputy chairman of the “Jews in the AfD” (JAfD) and press spokesman for the “Alternative Homosexuals” (AHO). In 2021, he ran for a direct mandate for the AfD Berlin Neukölln, but missed the entry into the German parliament (Bundestag).

Despite rather provocative ways of presenting himself to the public, Goldhammer is relatively unknown in Germany and receives no significant (media) attention beyond the AfD and circles close to the AfD. The daily newspaper Israel HaYom, however, published a portrait of him on the occasion of his candidacy for the Bundestag. Israel HaYom is a free newspaper widely distributed in Israel. Among Israelis, it is considered the mouthpiece of ex-Prime Minister Benjamin Netanyahu and is therefore colloquially called “Bibiton”, a combination of the words Bibi (Benjamin ben Netanyahu’s nickname) and Iton, the Hebrew word for newspaper. The newspaper is owned by the family of billionaire and Trump supporter Sheldon Adelson, who died in 2021. Investigations into alleged cooperation between Adelson and Netanyahu are part of the former Israeli prime minister’s ongoing corruption trial.

In the Israel HaYom article from June 2021, Goldhammer describes himself as a convert to Judaism, IDF soldier and former IDF press office employee in Jerusalem, as well as a homosexual. According to his own words, he comes from a German family without a “special Nazi past” (אין עבר נאצי מיוחד). Disturbingly, this “non-special Nazi past” includes grandparents in the Hitler Youth and relatives who served as “ordinary soldiers” (חיילים פשוטים), at least one of them on the Eastern Front. This self-portrayal, which downplays the active involvement of Goldhammer’s family members in the criminal Nazi system (Hitler Youth) and in genocide and war crimes (ordinary soldiers, Eastern Front), is adopted uncritically by the Israeli daily.

The author of the article is the Israeli journalist and writer Eldad Beck, who has written for the German paper Jüdische Allgemeine among others, and has given lectures and interviews for the German-Israeli Society and Yad Vashem. Goldhammer and Beck not only know each other from the interview for Israel HaYom, but also recently sat on stage together at the Forum Cafe Shapira. According to its website, this forum is part of the “Right-wing Intellectual House Beit Ori” in Ramat Gan, Israel, (בית אוֹרי אינטלקטואלי לימין) and strives to “restore logic and Zionism in discourse” (להשבת והציונות לשיח). Goldhammer was also the guest of honor at the Forum’s launch of Beck’s new book about the AfD, titled ” Alternative – The New Right for Germany” at the end of June 2022. According to information provided on the publisher’s website, Beck implies in his book that the (right-wing extremist) AfD has no ideological connection to National Socialism, attests to its pro-Israel stance and presents it as an important player in the fight against antisemitism in Germany.

The relationship between Goldhammer and Beck illustrates the connections between representatives of the AfD, right-wing actors in Israel, and supporters of the global New Right (or Alt-Right) and their (former) contacts with established (educational) organizations. The increasing intensification and institutionalization of these connections are extremely disturbing.

In light of these observations, the question arises as to how the AfD and its supporters influence and shape debates and discourse about antisemitism in the German public.Further, it should be critically reflected how the AfD undermines the discussion of antisemitism and Holocaust memory in the academic community. For example, Goldhammer is a member of the group “Against any antisemitism in education”, one of the largest Facebook groups against antisemitism in Germany, where researchers, members of the Jewish community, activists, teachers and educational institutions network. The extent to which far right-wing, supposedly pro-Israel positions have already found their way into discussions on the topic of antisemitism in Germany does not only become evident when Muslims are generalized and notoriously accused of antisemitism. It is also apparent when looking at several smear campaigns against Jews. Throughout the recent past, Jewish artists, researchers, and journalists have been repeatedly and publicly defamed (often on social media), especially by German non-Jews, as “self-hating Jews,” “not real Jews,” “anti-Israel,” antisemitic, and more. All of this because of their stances on the policies of the Israeli government or their solidarity with Muslims and Palestinians that deviate from the position that German society expects from Jews. As the Israeli-German educator and director of the Anne Frank Educational Centre Meron Mendel recently explained in his article for a major German newspaper, these narratives can be traced back to the pioneers of today’s settler movement in Israel and serve primarily to portray leftist Jews as ‘un-Jewish traitors to their own people.’ Often, the ‘journalism of suspicion’ in established German media uncritically adopts this portrayal and does not only deny its victims their Jewishness, but actively conceals it in order to make their presentation of Jews as antisemites more convincing.

These observations are alarming, and one has to ask: Where and how must actors and educational institutions that work to combat antisemitism reflect and intervene? Particularly when new-right positions seem to connect seamlessly to the positions of some initiatives that are committed to fighting antisemitism? In view of these questions, strategies are needed to identify, prevent, and counteract the new right’s appropriation of the fight against antisemitism. This also applies to related educational, journalistic and academic work. In order to develop these strategies, we need a discourse that does not only symbolically distance itself from the positions of the AfD and other far-right actors. Such a discourse must allow for diverse perspectives on complex problems without considering some positions as morally superior, while defaming and dismissing others as antisemitic from the outset. Screenshot of a contact request from Marcel Yaron Goldhammer on LinkedIn.

Finally, here is one piece of advice: If you are active in the field of antisemitism research and do not want to be associated with Alternativah L’Israel, Marcel Yaron Goldhammer or the AfD, check your contact lists on social media. Because Goldhammer seems very keen to connect on various platforms with actors from antisemitism research, and education as well as with Jews (some with central roles in the Jewish community).

About the Author
Monika Hübscher is a PhD candidate at Haifa University and a research associate and the Duisburg-Essen University in Germany. Her research focuses on antisemitism and Holocaust memory and she is the co-editor of the volume "Antisemitism on Social Media" (2022).
Related Topics
Related Posts