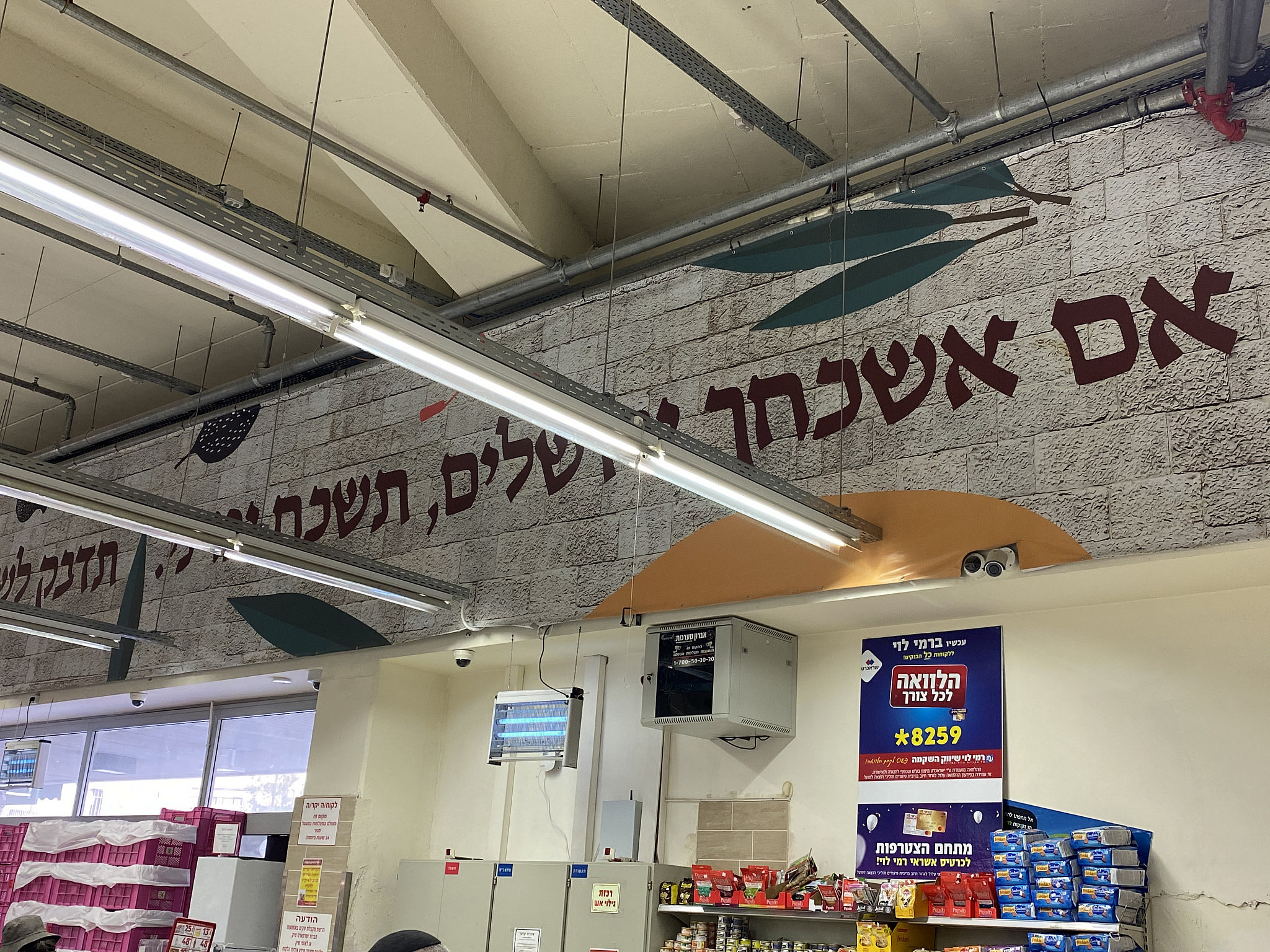 There’s a new movie out, “Don’t Look Up.”  Lots of people are talking about it so, the other night, with nothing better to watch, we watched it. I have mixed feelings about the movie, a dramatization of a huge comet on a collision course with earth. I’ll leave the rest of the story line and whether to watch it up to you and those who review movies.

Early the next morning, I found myself in the grocery store. Despite the injunction of the movie, I looked up while waiting to check out and pay. I’ve been in this exact spot hundreds of times, maybe more. Even if the movie was the best I have seen, this year or ever, I was blown away by what I saw. What was so significant in looking up, above the pet food?

Glancing to the upper part of the northern wall, I spotted another more significant injunction from Psalm 137: “If I forget you, O Jerusalem, let my right hand forget its skill…” Of course, it was in the original Hebrew. I’d never noticed it before because I had always been busy unloading my groceries and then packing them up again amid a crowd and just wanting to get out of the store. Wow, how grateful I was for pausing to look up. What a blessing and important reminder.

Apparently, this Biblical verse is common in (all) branches of the Rami Levi grocery stores. For a traditional Jewish entrepreneur who got his start with a small shop near the Machane Yehudah market in the center of Jerusalem, reminding everyone of the Biblical injunction to never forget Jerusalem, is not unusual. I have some investigation to do since I never noticed it in my local Rami Levi branch, much less in the dozens of others around the country.

After I left, I realized another remarkable thing about not just the Biblical verse painted on the wall; but which wall. It was the northern wall. In traditional Judaism, it’s common to place a reminder using this same Biblical injunction inside people’s homes and businesses. The verse is adapted in many artistic ways so that it becomes a centerpiece of one’s home. There are many forms of this but one I always find particularly striking is the Biblical verse, in Hebrew, adorning a piece of broken Jerusalem stone. These are usually put on the interior wall facing Jerusalem, so that when you look at it, you’re facing the direction in which your thoughts are focused.  From the Americas, that’s the eastern side. From Australia, that’s to the west. And in the Judean mountains south of Jerusalem proper and not even a dozen miles from the Temple Mount, that’s on the northern wall, facing Jerusalem.

Jerusalem was on my mind that night as well, attending a wedding. Always a time for joyous celebration, a Jewish wedding also involves mourning. If you’ve been to or seen a traditional Jewish wedding in modern media, you know that part of the wedding is stepping on and breaking a glass. Usually, this is met with cries of “Mazal Tov” and applause, as if that somehow affected the couple’s marriage. But the truth is, when breaking the glass, we remember Jerusalem. It’s common to sing the words of Psalm 137, so that not only are we remembering, but we even mourn the destruction of Jerusalem. Sure, it’s a modern city of about a million people, reunited as Israel’s eternal capital since 1967, but we still mourn the destruction of the Temple almost 2000 years ago. And we pray for Jerusalem’s complete restoration including the rebuilding of the Temple.

“If I forget you, O Jerusalem, let my right hand forget its skill! If I do not remember you, let my tongue cling to the roof of my mouth—if I do not exalt Jerusalem above my greatest joy.” Indeed, on the day of our greatest joy, marriage, we remember one of our saddest times as a people: the destruction of Jerusalem.

Looking up has another profound connection to Jerusalem. Of course, Jerusalem is not at the highest altitude in the world, or even in Israel for that matter. But when approaching Jerusalem from most directions, one is going up, whether from the coastal plain, or the Dead Sea and Jericho. And even if one is coming to Jerusalem from the mountains of Samaria in the north, or Judean Mountains in the south, one has to still get to the mountainous elevation by going up from somewhere. That’s why people refer to “going up to Jerusalem.”

Despite the title of the movie, if we need a reminder in our lives, this sign above the pet food at the Rami Levy checkout reminded me to always look up. God gives us these reminders – a form of signs and wonders – to look up, to Him, and all the things that He holds dear. At all times, we need to just look up, for inspiration and for strength, and of course in prayer and appreciation as we revere the God of Abraham, Isaac, and Jacob.  Always look up.