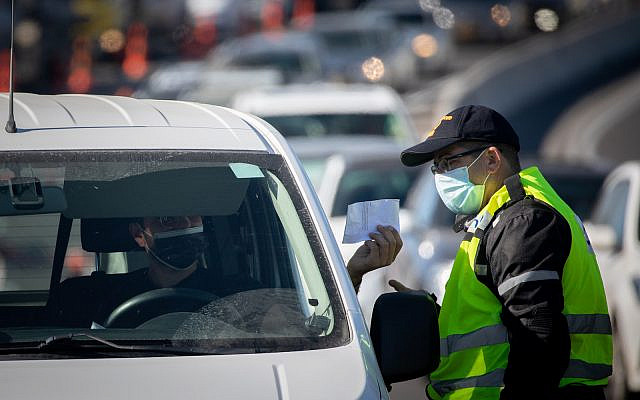 Police at a temporary roadblock on Road Number 1 outside Jerusalem on January 8, 2021, during a 3rd nationawide full lockdown, in an effort to prevent the spread of the Coronavirus. (Yonatan Sindel/Flash90)

A strange thing happened to me this morning as I planned my route to work; I found myself charting a course that includes backroads, alleyways, a stretch of farmland, someone’s backyard and, finally, my office. All this to avoid the Border Patrol officers at the intersections trying to enforce the lockdown. Am I a criminal? Not that I know of. I wear a mask. At all times. It makes me look like a bank robber. I don’t mind it. I maintain social distance. I’m an introvert, FFS. I’ve been waiting for this epidemic my whole life.

A decade ago I was in the IDF. A cameraman/director tasked with creating propaganda films to convince unsuspecting teenagers in high school that this infantry division is way more badass than that infantry division. It was a battle of the budgets, and if you wanted to get the recruits, you had to make a cool video.

A helicopter (my first time) departs the base in the West Bank. Pre-dawn. I’m crammed in with a dozen kids, barely out of high school, ascending over the hilly landscape. I turn the camera on, flip the mic and ask the commander about the operation. His response stays with me til this day:

“It’s a backroad out of ___. They (Palestinians) use it when we deploy barricades on the main road.”

“Is it dangerous?” I ask, trying to inject some drama into the operation.

“We’re just here to make their lives miserable.” He said.

No terrorist was apprehended that long day. A pregnant woman was forced to stand outside her car for a few hours. I was worried she’d give birth right there. I felt really bad for her.

“This is absolutely unfair!” I muse to myself as I prepare my litany of possible excuses. I have to shoot a video for work. But is that essential enough? Maybe I’m in charge of the server? I have to go and ping the network. Or something. I just need to know more about IT than the police officer at the barricade.

It’s a story of two Israels. In one Israel a 9-year-old girl wants to celebrate her birthday. So her parents tie a couple of balloons together around a tree and mark the boundaries of the affair. There aren’t that many guests; mostly immediate family. Some kids. No more than a dozen people AT MOST. Someone snitches and calls Mesubim station. Within minutes several cop cars are gathered at the park, terrifying a young nine-year-old girl for no reason. Just to make her life miserable.

In the other Israel, Rabbi Kanievsky, one of the Haredi spiritual leaders (who actually contracted COVID-19 back in October) has not been as cooperative in encouraging his pupils to remain in quarantine. These students are free, unlike the 9-year-old girl, to go about their lives without anyone trying to make it miserable.

I’ve been back in Israel for 13 years now. In elections, that’s like seven or eight. In wars (or “operations”) it’s also about seven or eight. I missed the Second Lebanese war by a year or so. I was out of the army by Cast Lead. Over the years, I’ve gotten used to the argument that Palestinians have made their own bed. Why did they elect Hamas if they truly want peace? I mean, it’s an organization that is actively trying to eliminate Israel. That’s not something that peaceful people do.

Looking at their plight through the Israeli political prism, it’s not hard to find parallels. How can the daily infections and death rate be rising when we have vaccinations AND  we’re locked down inside of our homes? The answer is that a large portion of the population is simply not adhering to the same social contract the rest of us are. The ultra-religious, who account for over a quarter of the confirmed cases, are disproportionately flooding the hospitals and creating a sense that nationally, this crisis is spiraling out of control.

One could argue that if Israelis really wanted to end the pandemic, they would stop electing the kind of officials that flout the restrictions. And just in case you thought of accusing me of singling out the ultra-religious, just know that the most egregious violators of the quarantines have often been secular politicians: Ruby Rivlin, Netanyahu, Gamliel… all documented violating the same laws they are enforcing on the rest of us.

But why am I going to work? Isn’t this whole silly rant really a contradiction. I’m not on the front lines. I don’t work in a hospital or a grocery store. I work in artificial intelligence and while I’m actively trying to improve people’s lives through automation, I’m not naive enough to think I’m essential. No, I fall into another category altogether. In my category are all the fathers (and/or mothers) of small children, whose prolonged absence from any sort of structured environment has rendered them savages. We will risk life and limb, fine and imprisonment, for a few hours of peace and fucking quiet.

Don’t judge me. There’s one computer that needs to service a fifth-grader, entertain a two-year-old and keep a work-from-home mom from losing her shit. Throw in some zoom connectivity issues, a bunch of homework that no one knows how to solve and the smell of a dirty diaper waiting to be switched.

No meeting, presentation or workshop is nearly as hard as working from home.

I put on my mask, my sunglasses and a black hoodie and keep reminding myself that I’ve done nothing wrong.