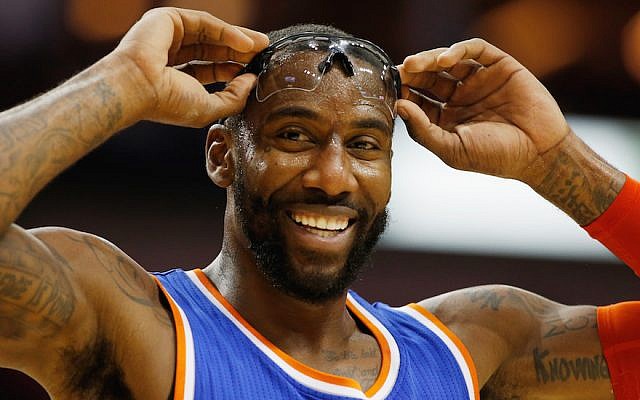 Amar’e Stoudemire playing for the New York Knicks during a game against the Houston Rockets at the Toyota Center in Houston, Texas, November 24, 2014. (Scott Halleran/Getty Images/via JTA)

Two prominent figures in the world of professional basketball allegedly made discriminatory comments about minority groups during two separate incidents. One of the incidents created a warranted media firestorm, while the second has been totally ignored by the media. Examining the two incidents reveals a media double standard that seems to be based upon the identity of the offended group.

Former New York Knick and current Hapoel Jerusalem basketball player Amar’e Stoudemire is under fire for homophobic jokes he recently made when asked by Walla Sport how he would behave if he had a gay teammate.

“I’m going to shower across the street, make sure my change of clothes are around the corner,” Stoudemire replied. “And I’m going to drive…take a different route to the gym.”

When asked two times whether he was joking, Stoudemire said, “I mean, there’s always a truth within a joke.”

Stoudemire has been justifiably taken to task for his inappropriate and insensitive comments by several different media outlets. Examples:

“You always want to give the player the benefit of the doubt that maybe his comments were taken out of context in situations like this, but it’s hard to see Stoudemire’s comments as anything but homophobic. The fact that he could have taken the easy way out and said he was joking, but chose not to, adds to the shock,” wrote Colin Ward-Henninger for CBS Sports.

“Here we are in 2017, when this feels like even more of a chore to detail. This sort of stuff was never funny, it was never right, and it also sufficiently clouds the sort of illumination that Amar’e had helped to encourage through his work with his award-winning foundation,” opined Kelly Dwyer, an editor for Ball Don’t Lie.

Expect many more commentators to weigh in on this controversy and Stoudemire will surely apologize. As well he should. And yet an earlier reported instance of discrimination in professional basketball not only went unpunished (despite being potentially illegal), it went totally unremarked upon by the mainstream media and basketball writers.

Why? Likely because the target of the alleged discriminatory comment was people of faith – a group that often doesn’t seem to elicit as much sympathy as other minorities.

As detailed in my last blog post, Houston Rockets general manager Daryl Morey was quoted by a reputable author as saying that team owner Leslie Alexander asked him about his religious beliefs during Morey’s job interview, presumably with the intent of not hiring a religiously observant person.

In his own job interview, Morey was reassured by Alexander’s social fearlessness, and the spirit in which he operated. “He asked me, ‘What religion are you?’ I remember thinking, I don’t think you’re supposed to ask me that. I answered it vaguely, and I think I was saying my family were Episcopalians and Lutherans when he stops me and says, ‘Just tell me you don’t believe any of that s–t.’

This excerpt from the book, The Undoing Project: A Friendship That Changed Our Minds by highly respected author Michael Lewis, has not generated any negative media attention for Alexander, despite the fact that he seemingly broke the law by applying discriminatory criteria to his hiring process (assuming this reporting is correct. Thus far, no one involved has disputed it). The NBA commissioner has not issued a comment.

I attempted to bring this story to the attention of several prominent basketball writers/personalities via Twitter, but no one responded. In fact, in my previous blog post, I wrote:

Imagine the uproar if Alexander had asked Morey to express derogatory views about African-Americans or homosexuals! But despite the popularity of Slate and Michael Lewis, no one is talking about Alexander’s discriminatory query (don’t take my word for it, try a Google search).

The Stoudemire backlash proves my point. He made derogatory (and partially joking) comments about homosexuals and the incident has blown up into a big news story. But Alexander also made discriminatory comments, during a hiring process, yet journalists have not defended the civil rights of the religiously observant in America in this instance. Same storyline, very different reaction.

The goal of stories about discrimination should be to further the rights of all groups, as opposed to picking and choosing when to be outraged based on the specific group identity of the victims.