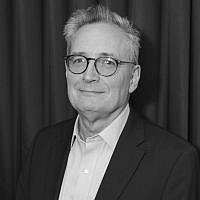 The Blogs
Dana Allin
Apply for a Blog
Please note that the posts on The Blogs are contributed by third parties. The opinions, facts and any media content in them are presented solely by the authors, and neither The Times of Israel nor its partners assume any responsibility for them. Please contact us in case of abuse. In case of abuse,
Report this post. 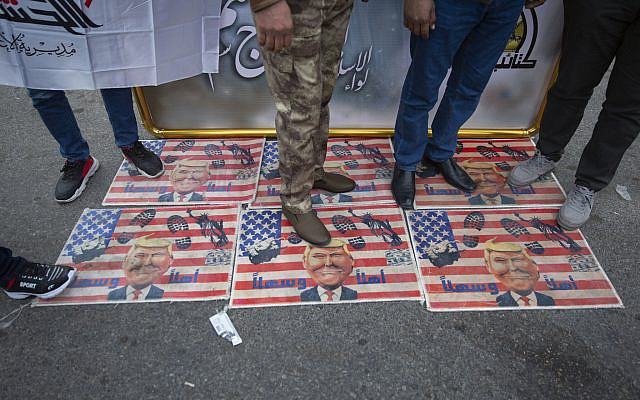 Mourners step over a U.S. flags with pictures of President Trump while waiting for the funeral of Iran's top general Qassem Soleimani and Abu Mahdi al-Muhandis, deputy commander of Iran-backed militias in Iraq known as the Popular Mobilization Forces, in Baghdad, Iraq, Saturday, Jan. 4, 2020. (AP Photo/Nasser Nasser via Jewish News)

“The killing of Soleimani is a US event, not an Israeli event, and we should stay out of it.” It is wise not to over-interpret this statement from Benjamin Netanyahu to his security cabinet, but it does convey at least a hint of recognition that maximum conceivable American belligerence against an enemy of Israel is not necessarily and always in Israel’s interest.

Israeli generals, intelligence chiefs and other leading members of the security establishment have understood this much for a long time, which is one reason they were a lot less enthusiastic than Netanyahu about Donald Trump’s abrogation of the Iran nuclear deal. Netanyahu was loathe to recognise that abrogation – and Trump’s strategy of ‘maximum pressure’ against Iran – could lead to a war that the US was not really prepared to fight.

For Americans at large, the 21st century’s bitter lesson is that overwhelming military superiority does not make land wars in the Middle East easy – or even, after two decades of buried blood and treasure, palatable.

Few Israelis will mourn the demise of Soleimani, whose poisonous anti-Zionism was part of his ruthless, and somewhat successful, expansion of Iran’s regional power. Yet Israelis should also recognise that the narcissistic impulsiveness of their Trumpian champion – more evidently motivated by resentment of Barack Obama than a coherent strategy in the Middle East – is making America weaker, not stronger, in the region. It is hard to see that weakening as good for Israel.

There is a range of scenarios, and it does not look promising. One is an escalation of the US-Iran conflict to a level of destruction that lets the US re-establish a modicum of deterrence. Another is that Iran avoids direct escalation because it benefits from a more peaceful blowback if Iraq’s parliament and acting government follow through on demanding the departure of American forces. A third is that mediation efforts by France and others lead to some form of diplomacy between Washington and Iran.

There are other scenarios, and some include Iran targeting Israel, despite Netanyahu’s expressed desire to stay out of it. What characterises them all is that no successful outcome is conceivable without restoring America’s atrophied – or, more accurately, amputated – diplomatic muscles.

Recall another Middle East crisis: the Yom Kuppur War of October 1973. Nixon leveraged a calculated escalation, warning the Soviets off intervention by placing American nuclear forces on alert. It worked, but only because of Henry Kissinger’s relentless diplomacy in Moscow, Cairo, Damascus and Jerusalem. The result was a strengthened American position in the Middle East, including the de facto alliance with Egypt, and the eventual peace treaty between Israel and Egypt.

Trump, alas, is no Nixon, and his administration contains no Henry Kissingers. This is likely to be Israel’s loss, as well as America’s.

About the Author
Dr. Dana H. Allin is Senior Fellow for US Foreign Policy and Transatlantic Affairs as well as Editor, Survival, at the International Institute for Strategic Studies in London.
Related Topics
Related Posts
Comments