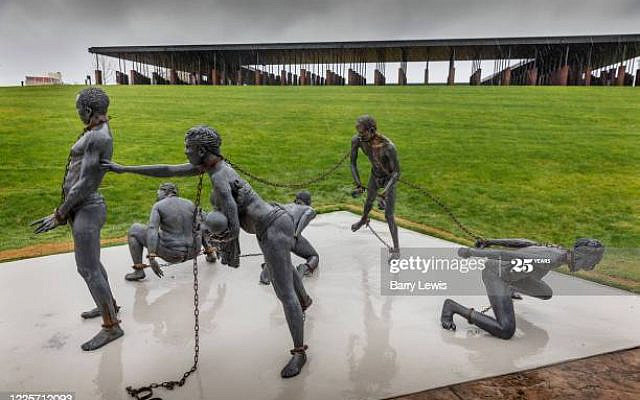 Kwame Akoto-Bamfo's 'Nkyinkim' sculpture, dedicated to the memory of the victims of the Transatlantic slave trade at the entrance of the National Memorial for Peace And Justice on 3rd March 2020 in Montgomery, Alabama, United States. It has the title Nkyinkyim meaning twisted, relating to the proverb 'lifes journey is twisted. it was created at the artists studio in Ghana and installed in Montgomery for the opening of the Memorial in 2018. Informally known as the National Lynching Memorial, a national memorial to commemorate the victims of lynching in the United States was the brainchild of Bryan Stevenson, who was inspired by the Holocaust memorials in Europe and by the post-Apartheid Truth and Reconciliation process in South Africa. The Memorial in Montgomery was opened in 2018. Current research shows that 4,084 African Americans were lynched between 1877 and 1950. More than 85% of the lynchings took place in the Southern states.e wider process of acknowledgement and healing they want to achieve.(photo by Barry Lewis/InPictures via Getty Images)

It was announced Wednesday, October 14, that Germany would pay half a billion euros or $662 million in aid to Holocaust survivors: these are primarily Jewish seniors who are struggling during the pandemic. According to the New York-based Conference on Jewish Material Claims Against Germany or the Claims Conference, the funds will be distributed to approximately 240,000 survivors. Most of the recipients reside in countries in Western Europe, the former Soviet Union, North America and of course, Israel.

As a Jew, not the direct descendant of immediate survivors, but whose life is spent in the company of survivor families, I am thrilled by this. It is justice. But as a dual citizen of both countries, Israel and the United States, I can’t help but wonder why making reparations for the Transatlantic slave trade to the families of the victims of the atrocity is such a tall order. The surviving Jews faced with existential crisis in the twentieth century were talented organizers. They came after their oppressors and made sure that all that was possible in retrospect would be done to honor the victims of the Nazi Holocaust. Sadly, African-Americans, who served as slaves in America for some 400 years, have not had the ability to demand de facto reparations for the rape of their people by the colonists and the slave traders and wealthy people in first century United States. This changed in 2014, when Ta-Nehisi Coates wrote an article in the Atlantic Monthly—a periodical which he used to be a staff writer for—entitled, ‘The Case for Reparations’. His idea gained traction in the media and finally made its way to Congress, for debate.

Back to the case of us Jews. For many years, a long list of countries: Austria, Belgium, Croatia, the Czech Republic, Denmark, France, Germany, Hungary, Italy, Macedonia, Netherlands, Poland, and Serbia, all have had financial restitution and compensation programs for citizens who were deported to concentration camps or had their livelihood and savings stolen during the Shoah, according to the chart, Holocaust Restitution: Compensation and Restitution by Country, provided by the Jewish Virtual Library.

Why can’t America do the same for the African-Americans? Last summer, in the United States, a bill was introduced in the House by Democratic lawmakers dubbed, ‘H.R. 40 and the Path to Restorative Justice’. It officially introduced philosophy towards legislation that would provide reparations to the African-Americans. The fabled legend, Union General William Sherman’s program of “40 acres and a mule”, introduced on January 16, 1865, providing benefits for some freed slaves along the southeast coast did not go far enough. Only 40,000 freed slaves received the benefit. In fact it was a joke; for freed southern slaves did not receive “40 acres and a mule”. They hardly received anything!

In 2020, the United States of America finds itself divided and fractured. Many of my Jewish compatriots are Donald J. Trump supporters, and proud Republicans. By principle, they would reject any idea brought forth from the left-side of the aisle. They would be infuriated by the very thought that some federal savings will go into the pockets of the souls who were raped, stolen and enslaved. Not made to suffer like the Jewish people, but made to suffer in another way; like slaves; the worst case of slavery ever in the history of the world. But it’s not just Republicans who are opposed to making reparations to African Americans. Some Jewish Democrats, also, (who find themselves regularly in the centrist position, fiscally) insist that they will not be made to pay financial restitution, or watch as their country does, for something they feel they were not even directly responsible for.

In an August 15, 2020 article online by CNN the answer where would the funds come from, is answered:

Generally, advocates for reparations say that three different groups should pay for them: federal and state governments, which enshrined, supported and protected the institution of slavery; private businesses that financially benefited from it; and rich families that owe a good portion of their wealth to slavery.

If the surviving Jews can demand reparations be made by Germany and other European nations for the genocide they either designed or were complicit in, then American Jews should welcome the same kind of reparations for black families.

After Coates’ 2014 essay in the Atlantic Monthly, fellow staff writer, David Frum, wrote a counterpoint entitled, ‘The Impossibility of Reparations’ arguing that if the United States had to pay compensation to African-Americans first, then next will come the Native Americans, and on and on until it’s out-of-control and the needle has shifted and it is once again unjust, marginalizing white citizens, this time. I didn’t read Frum’s article back then, but today I can proudly disagree with it on the grounds that, even as a Jewish man, I don’t insist that only Jewish Holocaust survivors be paid back, but also Romani (gypsies) and all other races and creeds of 20th century Europe who had their lives stolen and were shipped like cattle to concentration camps to work to death in forced labor, women and children shot down and suffocated in gas chambers and the such.

The common denominator between the Transatlantic slave trade and the Nazi Holocaust is the unmistakable pawprint of white supremacy. Today, with their financial package to Holocaust survivors, Germany has taken a step in the right direction. It is time for the United States to do the same.