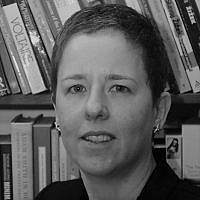 The Blogs
Maya Haber
Apply for a Blog
Advertisement
Please note that the posts on The Blogs are contributed by third parties. The opinions, facts and any media content in them are presented solely by the authors, and neither The Times of Israel nor its partners assume any responsibility for them. Please contact us in case of abuse. In case of abuse,
Report this post.

This Passover, hospital security guards in Israel are required to search visitors for leavened food. The new Chief Rabbinate regulation, which forbids chamez on hospital premises includes all unpackaged food. Security guards simply aren’t able determine if a visitor’s unwrapped homemade cookies were baked in an oven kosher for Passover or if an open package of Passover kosher snacks had spilled in a non-kosher bag. It’s an outrageous invasion of privacy and its only one battle in a political war of attrition to redefine Israeli public spaces.

For progressive Americans, it’s much too easy to turn a blind eye and pass it off as an outlandish measure taking Israel a step closer to a religious state. But analyzing this latest incident shows it’s more like our own cultural war than we want to acknowledge. For, the weapons used in this war were honed, tested, and exported by American conservatives.

Israeli hospitals have always observed kosher rules. They need kashrut certificates from the Chief Rabbinate, if they are to serve the entire population. There is nothing wrong with observing kashrut in public institutions. But in the past, hospitals hung signs at the entrances asking visitors to consider the beliefs of observant Jews and avoid bringing chamez into the hospital. It’s only in the last few years that this status quo has been eroding for more direct and invasive methods.

The public outrage isn’t about the requirement to eat kosher in Passover. According to a recent survey 67.3 percent of Israeli Jews eat only kosher during Passover. The question is whether the state has the right to enforce this regulation on the general population. In the same survey 60 percent argued that the state should not forbid restaurants and coffee shops from selling chamez during the holiday. The Israeli public, religious and secular alike, feels violated when public officials publicly regulate their dietary choices.

The new regulation doesn’t merely target secular and non-Jewish visitors. Under it, a Haredi family would not be allowed to bring homemade comfort food to a sick child in the hospital.

Security personnel object as well. The chair of the national organization representing security guards said their job is “to prevent terrorist attacks and violence against medical personnel,” not to function as religious police.

Yet, while all this might sound like yet more religious coercion and indoctrination from a country that has lost its liberal way, the underlying argument in this war was manufactured much closer to home by conservative Americans.

Take for example the response of the Ashkenazi Chief Rabbi of Israel, David Lau and the deputy minister of health, Rabbi Yaakov Litzman (United Torah Judaism Party) to the Secular Forum’s petition to the High Court against the regulation. Searching bags for leavened food in Passover is necessary, they say, because it protects the religious freedoms of the observants. If secular Jews and gentiles brought chamez into hospitals, they would make the environment non-kosher and therefore violate observant Jews’ freedoms. The inclusion of the religious, therefore, demands the violation of right to privacy of everyone else.

Litzman and Lau use a liberal rhetoric of inclusion and equality. They misconstrue the Secular Forum’s petition to the High Court arguing it was simply another secular attempt to spite them. “Does anyone really need a leavened bun that much?… Why turn everything into a war?” They minimize the importance of the right to privacy.

If this sounds familiar, it’s because this liberal weapon of tolerance has become a key tactic used by the American Right. The owners of Hobby Lobby, for example, challenged that the Affordable Care Act violated their religious beliefs by requiring them to provide their employees health coverage for contraceptives. In other words, their religious freedom was more important than the rights of their female employees to healthcare. Similarly, in Fisher v. University of Texas, Abigail Fisher challenged affirmative action arguing that as a white woman, she should have the right to equality in university admission. Affirmative action applied to historically marginalized and oppressed minorities violates her rights.

The battle over the search for chametz is only one example in which liberal values of equality, inclusion and tolerance is used to justify the discrimination of others. In the last few years, religious extremists have been calling for the segregation of women and men in the IDF, in academic institutions and even on buses. Segregation advocates too argue that since Halakha forbids ultraorthodox men to sit next to women in classes or attend office hours of a female professor, the existence of unsegregated spaces discriminates against them. Their rights to study, serve in their IDF unit of choice, or use public transportation is violated because the universal policies of public institutions force them to infringe on their particular religious beliefs.

In the United States, like in Israel, the struggle for equality is complex. But a liberal democracy cannot discriminate against some in the name of inclusion of others. It cannot honor the religious freedom of the owners of Hobby Lobby at the expense of the rights of their female employees. Neither can it offer equal opportunities to ultraorthodox individuals by limiting opportunities available to women. Israeli society can and should find creative solutions that will meet the Halakhic requirements of the observants while respecting the rights of individuals.

Politically, we in the progressive community need to look the Israeli political war in the eye and understand that conservatives in Israel and the US work symbiotically to redefine the public space. We should follow in their footsteps and help our progressive brethren in Israel win the political war and strengthen their democracy.

About the Author
Maya Haber is an American-Israeli strategic consultant living in Pittsburgh, PA. She earned a PhD in history at the University of California Los Angeles. She writes and lectures about American Jewish impact in Israel, Israeli internal politics and social justice in Israel.
Related Topics
Related Posts
Maya Haber
Comments