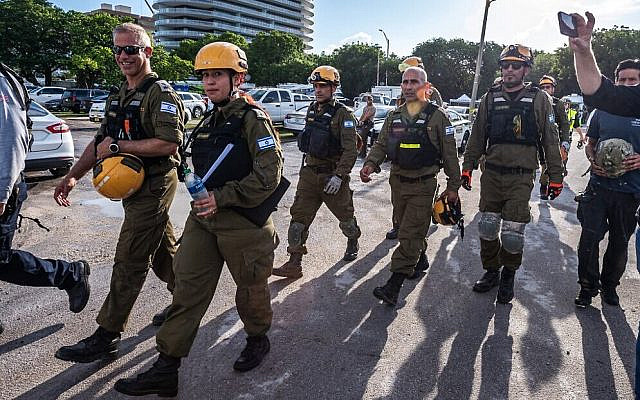 Diaspora Minister Nachman Shai’s trip to the United States and the dispatch of an emergency Home Front Command delegation to the disaster scene in Miami signify a “refreshing renewal,” even a precedent-setting turning point. The new government should work not only to restore relations with the Democratic Party and position Israel outside the American political system, but also to repair ties with the Jewish community in the United States based on brotherhood and reciprocity.

American Jewry is the second-largest Jewish community in the world after Israel. The importance of its political support for Israel is invaluable. The donations that come from it, although no longer existential, are of great help to our country. Beyond the utilitarian aspects, relations with this community – and with all Diaspora Jews – have inherent value, and the preservation of the connection between the world’s two major Jewish communities is essential for strengthening Jewish peoplehood.

Throughout his 12 years in power, Benjamin Netanyahu preferred, mainly for reasons of political survival and the need for ultra-Orthodox support, to give up on Reform, Conservative, Democratic and progressive US Jews, not to mention, heaven save us, “leftists.” The enthusiastic and unconditional support of evangelicals for his policies resulted in increasing alienation from Israel among American Jews, especially the younger generation, and gave rise to the phenomena of anti-Zionism and antisemitism there, which had been almost non-existent.

The new Israeli government also presents the opportunity for a historic turning point in the nature of relations with American Jews and how they are conducted. No longer characterized by a giving party (American Jews) and a receiving party (the State of Israel), relations are now reciprocal.

There were times when American Jewish support for Israel was existential, but times have changed. Their economic support has become marginal in the State of Israel’s budget; it does not depend on it. On the other hand, US political support for Israel, remains vital, and US Jews have a role to play in its preservation.

The Basic Law, Israel – the Nation-State of the Jewish People, affirms that the State of Israel has a responsibility for the security and identity of Diaspora Jews. In the past, Israel has not shouldered responsibility in these areas, but the constitutional recognition of this obligation upgrades its duty to Jews in general and those in the United States in particular.

The State of Israel has much to gain, in deed and in spirit, from American Jews, but it is also committed to them and must be willing to act on their behalf and support them in times of need. The Jewish community in the United States is very strong. At the same time, it faces significant identity challenges. A Pew Research Center survey released a month ago indicates a declining identification of young Jews in the United States with their Judaism and a more limited willingness to identify themselves as Jews than in the past. Israel can do much in the face of this challenge, which it has officially taken on in the Nation-State Law.

The pictures from Miami of Israelis helping Americans search for survivors among the ruins of a collapsed building look a little strange. We have become accustomed to the opposite reality when it comes to the United States, the largest superpower in the world. And yet, as far as American Jews are concerned, Israel can and should do more.

To realize the spirit of change, the government must formulate courses of action and invest resources in ways that will not only bridge the chasm that has opened up between us and the Jews of the United States, but also establish mutual values and reciprocity.

About the Author
Shuki Friedman is the Vice President of the Jewish People Policy Institute and is a lecturer of law at the Peres Academic Center.
Related Topics
Related Posts
Comments
Advertisement