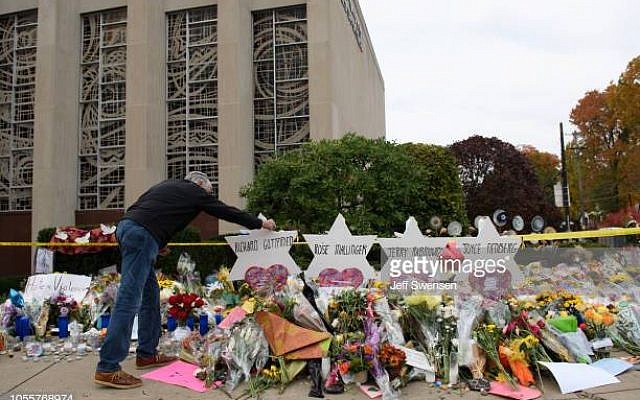 In the aftermath of the horrific shooting at The Tree of Life Synagogue — I took members of my community to Pittsburgh to bear witness to the fact that American Jews in 2018 can be murdered in a synagogue. I also thought it was an important teaching moment in terms of Jewish solidarity — Jews respond to the suffering of other Jews. My 24 hours in Squirrel Hill were heartbreaking as I drove from one funeral to another shiva house to another funeral. As I stood in front of the Tree of Life synagogue looking at the vigil for the eleven souls — I asked myself if it was possible to find any light within this unthinkable massacre. Perhaps this would motivate American Jewry to follow in the footsteps of the Parkland students I thought. Afterall, they successfully  inspired millions around the country to march for stricter gun laws which eventually led to a surge of new gun control laws.

Following the Pittsburgh shooting though, the activism that emerged from other mass shootings has been limited within the Jewish community. Conversations have mostly surrounded the new wave of antisemitism and synagogue security. While these are certainly critical issues to discuss — I believe our Jewish tradition demands even more of us. We can have updated security systems to better protect our synagogues, schools, and community centers while also advocating for common sense gun legislation. Israel for example has major security threats and still has very comprehensive gun laws. Civilians holding firearms licenses in Israel must renew them and pass a shooting course every three years, and undergo psychological assessment at least once every six years.

Gun control is not just a political issue — it’s a deeply religious one. Protecting the sanctity of human life is our most sacred value. Owning an impaired ladder or failing to put a fence around the roof of one’s home is forbidden under Jewish law — imagine what the rabbis of the Talmud would say regarding owning an assault rifle or the current laws surrounding background checks.

The Torah undeniably holds us responsible for the safety of others and forbids us to stand idly by the blood of our neighbors. America may stand by Good Samaritan laws but Judaism requires one to offer help to those in danger and holds those who fail to do so liable. Under Jewish law, one cannot pass someone drowning without making an attempt to save their life. Considering the fact that Americans are 25 times more likely to be murdered by a gun than people in other developed countries — it seems reasonable to conclude that we’ve an obligation towards ending the gun epidemic in the country.

Before tending to our spiritual needs — our most primal responsibility must be to protect the physical safety of our communities. If we share the dream of the prophet Isaiah where swords transform into plows and spears into pruning knives then  advocating for common sense gun reform is a necessary starting place to begin actualizing this era of safety.

As Jews — we’re tasked to answer Cain’s infamous question of “Am I my brother’s keeper?” with an emphatic “yes”.  Remaining indifferent to the plight of others is completely antithetical to Judaism and makes a mockery of what God demands of us. I actively protest gun violence and demand reform, not just as a civic responsibility but as a religious imperative. Whether one nourishes a starving soul or works towards installing gun safety measures — the obligation of protecting life is our most treasured religious duty. I’m done praying and lowering the flag. The Sages were emphatic that one must not depend on miracles — we cannot assume that another Sandy Hook or Tree of Life shooting will be prevented by the grace of God. The time demands our action.