Americans, no matter where they live, have the right to vote in Federal Elections in their former states, even if they have permanently left America.  Some overseas voters say their vote doesn’t count, why should they vote because they no longer live in America, or it’s too difficult.  Your vote and your opinion does count. Voting is a “democratic right” of Americans to take part in electing the federal government.  By not voting, you allow others to speak for you, your voice becomes silent.

Thanks to the  Uniformed and Overseas Citizens Absentee Voting Act (UOCAVA), a United States federal law dealing with elections and voting rights for United States citizens residing overseas, YOU have the opportunity to vote.  Rep. Swift, Al [D-WA-2] introduced UOCVA to the 99th Congress.  Public Law 99-410  was signed into law by President Ronald Reagan on August 28, 1986.  A positive example of elected officials collectively deciding policy issues that concern overseas Americans. 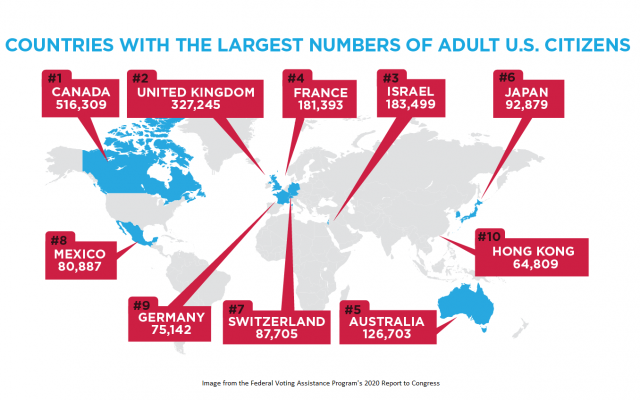 Countries with the highest numbers of voting-age U.S. citizens

According to a recently released FVAP Report to Congress, our small country, Israel, ranks 3rd of countries around the world where you will find Americans.  Yet, comparing population by country, Israel ranks 100 of 235 countries.  It speaks volumes about our “Start Up Nation” Israel.

The Federal Voting Assistance Program (FVAP) works to ensure overseas citizens are aware of their right to vote and have the tools and resources to successfully do so – from anywhere in the world.  After every federal election, FVAP submits a Report to Congress, Senate, and President about where Americans voted from, percentage voted, what worked, what didn’t, and recommendations for future elections.

For each foreign country, the report estimated the total number of U.S. citizens, how many are of voting age, and their voting rates. Countries with the highest numbers of voting-age U.S. citizens are Canada, the United Kingdom, Israel, France, and Australia.

“It is important to remember that FVAP is an assistance program — our mission is to inform citizens covered by UOCAVA of their right to vote and provide the tools and resources to help those who want to vote do so successfully from anywhere in the world.

The 2020 election cycle represented a unique set of challenges and opportunities. The COVID-19 global pandemic directly impacted FVAP’s traditional operations beginning in the spring of 2020 when various countries became subject to travel restrictions and non delivery of mail. In response to global conditions, FVAP quickly developed and implemented a plan: 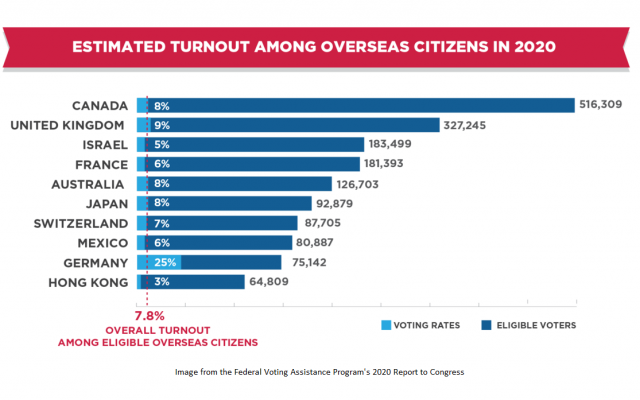 The 2020 overall voting turnout among eligible overseas citizens was rather low at 7.8%; compared to the 79.2 percent of domestic voters.  Only 5% of Americans in Israel voted.  Imagine what Congress, Senate, and the President might think: “If only 5% of eligible voters in Israel voted, why should we care about Israel?  These voters don’t care about America.”  Remember the 99th Congress created your right to vote from overseas.

Many Secretaries of States are listening to overseas and military voters by preparing now for the next Federal Election.  West Virginia has implemented a secure mobile voting application that allows voters to receive, vote, and return their ballots electronically. The application also utilizes blockchain technology to store electronically submitted ballots until election night, and requires a heightened standard of identity verification for users than traditional absentee ballot processes.  Iowa’s Secretary of State’s office is implementing a FVAP/UOCAVA training for their county election officials and feel the need to educate voters on the process and encourage them to participate, and cast their ballots safely and securely.  In 2014 Nevada released a completely online resource that seamlessly integrates voter registration and electronic ballot delivery, and they now want to educate candidates to reach out to voters abroad.

By voting you can HIRE OR FIRE ELECTED OFFICIALS…. The 2022 Federal Midterm Election is November 8, 2022.  A total of 469 seats in the U.S. Congress (34 Senate seats and all 435 House seats).  Primary dates are determined by each state.  It is highly recommended you register to vote January 1st and request your ballot to be emailed. Ballots are counted by your state’s election office. In order to vote you need to be registered, your ballot must be filled out correctly and returned based on your state’s guidelines. If you are aware of any specific cases where your ballot was not counted, please contact your local election office directly for the reason, so it can be rectified for future elections. FVAP is available to help if your locality is unresponsive.

Together we can encourage Americans overseas to vote and increase the overall turnout among eligible overseas citizens.

BY VOTING YOU CAN HIRE OR FIRE ELECTED OFFICIALS.

BY NOT VOTING, YOU ALLOW OTHERS TO SPEAK FOR YOU!!