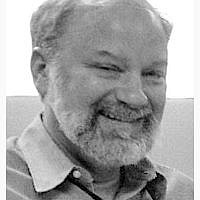 The Blogs
Frank Domurad
Apply for a Blog
Please note that the posts on The Blogs are contributed by third parties. The opinions, facts and any media content in them are presented solely by the authors, and neither The Times of Israel nor its partners assume any responsibility for them. Please contact us in case of abuse. In case of abuse,
Report this post. 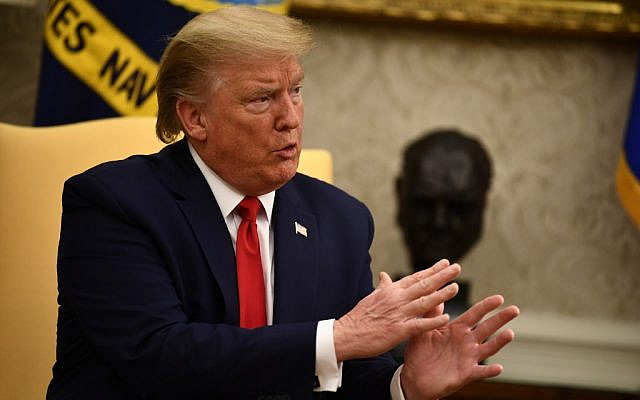 US President Donald Trump speaks during a meeting with Texas Governor Greg Abbott on May 7, 2020, in the Oval Office of the White House, in Washington, DC. (Brendan Smialowski / AFP)

On January 30, 1933, shortly after 11 o’clock in the morning, Germany’s conservative elite made a pact with the devil. Confident that they could control the evil in their midst, they convinced the revered and aged President Paul von Hindenburg to appoint Adolf Hitler chancellor of Germany, thereby effectively bringing the Weimar Republic, the nation’s second attempt at democracy, to a close.

As educated men schooled in German universities, they should have known that in the medieval legend of Faust pacts, with the devil often go awry. And so it did in this instance. As the historian Peter Fritzsche made clear in his latest book on the Nazi assumption of power, Hitler in his first 100 days in office wasted little time casting aside his erstwhile enablers and transforming Germans into Nazis.

Democracy as a form of political governance has in the course of human history been the exception rather than the rule. It has been difficult to construct, but simpler to destroy. It rests on two basic principles. The first presumes a political community of citizens, each with the equal right to express and pursue his or her values, beliefs and interests without fear of being excluded from that community. The second dictates that conflicts of interest will be resolved according to a consensual and procedural rule of law rather than through coercion and violence. Donald Trump has set out to abolish both.

The sociologists Rainer Baum and Frank J. Lechner described pre-Hitler Germany as a “nation of moral strangers.” It was a country whose people could neither agree about the nature of a good society nor the social relations and community that that social order entailed. Germans generally divided into closely bounded and mostly incompatible social and cultural milieu, the most prominent of which, at the end of the Weimar Republic, were Catholic, Socialist, and Protestant conservative-völkisch. In this normative world, political negotiation and compromise proved impossible; there could only be winners and losers, the included and the excluded.

Donald Trump’s goal as president has always been and still is to recast the United States in the mold of a nation of moral strangers. Americans, like Germans before them, are increasingly categorizing themselves under his encouragement as members of separate and irreconcilable social and cultural milieus. On the one side are what might be considered those who believe in a liberal-progressive social order. This view of the world seeks social justice and social change and is universalistic rather than particularistic in its insistence on human and civil rights. On the other side, is a conservative, authoritarian and nationalist notion of a good society, one that defines the world in terms of ethnic, racial and religious divisions, that portrays events as good and evil, and that attempts to protect “us” from “them.”

From the very start of his presidential campaign, Trump made it clear that he prefers exclusion rather than inclusion. Key to his electoral propaganda was the image of building a “big, beautiful wall” on our border with Mexico. While blond-haired Norwegians were clearly welcome in this America, brown-skinned people of Latino and Latina extraction were not. This perception of physical barriers to protect domestic safety quickly morphed into a full-scale attack on immigration, with its graphic images of hundreds of innocent children locked in cages in unconscionable material and psychological conditions. Now virtually every Trump critic and adversary is defined as being beyond the pale of political acceptability. As before, in Germany, a political situation has been created where there can only be winners and losers.

Buttressing this moral image of America as a fortress under siege is a determined effort to undermine the legitimacy of the rule of law. Whether this image presents itself as calculated voter suppression, going so far as to force people to endanger their lives to vote in a Wisconsin primary, or whether it is the rush of Senate Majority Leader Mitch McConnell to appoint right-wing, unqualified judges to the bench, constitutional procedural justice is being replaced by political alternative justice as a means of settling conflicts of interest.

Moreover, with the recent incidents of men armed with semi-automatic weapons occupying the Michigan state capitol and the City of Stillwater in Oklahoma being forced to rescind an emergency decree for customers to wear face masks in restaurants and stores after employees were verbally abused and threatened with physical harm, any hope of settling political differences peacefully is being brutally cast aside. Yet both actions are seen by Donald Trump as those of “good men.”

In fact, Michigan and Oklahoma are merely the tip of a pernicious development being legitimated by the president. Shortly after the 9/11 attacks on the World Trade Center in New York and the Pentagon  in Washington, DC, the Department of Homeland Security, in conjunction with the National District Attorneys Association, contracted with me to train corrections and probation officers, judges, prosecutors, defense attorneys and other criminal justice professionals about identifying and reporting signs of international and domestic terrorism. Representatives from the FBI, the National Counterterrorism Center and other federal law enforcement agencies repeatedly emphasized that, by far, the major threat to this country was not international but domestic terrorism. What was their greatest concern looking into the future? That some severe economic crisis would unleash these home-grown violent forces with the encouragement of a manipulative political leader.

So with the economic chaos now being created by the COVID-19 pandemic, with democracy in America already weakened by three years of Donald Trump’s presidency and with the parallels to the collapse of the Weimar Republic growing stronger by the day, is an American version of Hitler’s 100 days in the offing? My belief is that this nation’s opportunity to strike a bargain with the devil will come with the November elections. It is then that the real possibility exists that Trump will either seek to “delay” voting with an emergency decree responding to an even more virulent round of viral disease and death, or refuse to accept the results of the election on the grounds of a massive voter fraud perpetrated by a Democratic deep state led by the likes of Nancy Pelosi and George Soros.

About the Author
Frank Domurad is an historian of fascism and Modern Germany. His most recent book is Hometown Hamburg: Artisans and the Political Struggle for Social Order in the Weimar Republic.
Related Topics
Related Posts
Comments