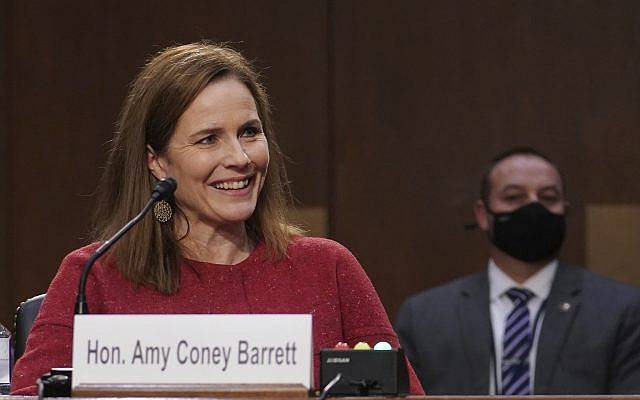 Meir Soloveichik, the eminent rabbi of Congregation Shearith Israel in Manhattan, has argued in a recent New York Times article that we should consider Judge Amy Coney Barrett’s nomination for the Supreme Court based on her jurisprudence, not on her faith. The implication being that to do otherwise would be an act of religious bigotry which could be applied to any believers, including Jews. Rabbi Soloveichik, whose lectures on Torah have enlightened and inspired a wide popular audience, invokes the experience of America’s Jews in demanding a corresponding deference for Judge Barrett, arguing that she should be judged on her record, not her religion.

In making his case, Soloveichik cites George Washington’s 1790 letter to Rabbi Moses Seixas of Newport assuring the rabbi that the new nation would give no sanction to bigotry and that all faiths would be treated equally. Rabbi Soloveichik writes that “we dream of our daughters and sons experiencing equality without suffering for their beliefs” — presumably as Judge Barrett may be, for hers. He asks us to ponder “what the reaction would now be were a member of our own religious community appointed to a position of prominence.”

He need not wonder since, for more than a century, this has indeed been the case.

The Supreme Court has been distinguished by an impressive array of Jewish justices — among them Louis Brandeis, Felix Frankfurter, and Ruth Bader Ginsburg whose seat Judge Barrett would fill. While they may have been inspired by Jewish values, none of these justices imposed Jewish doctrine on their jurisprudence. On the contrary, in the face of purported Jewish conspiracies, while not denying their faith, they bent over backwards to keep a distance from it. Similarly, the many Jewish legislators who held high office in Congress ran on secular issues.  Even when advocating Jewish interests, such as fighting immigration restrictions, their appeals were always based on American values, not religious ones.

This is not the case with Judge Barrett. Her supporters have embraced her precisely because they feel her religious beliefs will determine her judicial rulings. Judge Barrett is a committed member of People of Praise, a zealously conservative, predominantly Catholic group that is publicly committed to ending “the barbaric legacy of Roe v. Wade,” and has acted against gay rights. She has publicly endorsed their views. Her candor does not mitigate her clearly stated opinions. Given Judge Barrett’s profound commitment to this sectarian doctrine, whatever her disclaimers, it is unlikely that she would miss the opportunity of reversing Roe.

It is surely not her position on originalism or health care that inspires her adherents’ enthusiasm. There are plenty of other candidates of the Federalist Society who could fill that role. The one issue that distinguishes Judge Barrett from the rest of the conservative jurists considered for the nomination is her passionate opposition to abortion based on her commitment to a community of faith that goes well beyond traditional Catholicism in its intensity and fervor. The concern this raises is not her religion, as Rabbi Soloveichik would have us believe. Rather, it is the influence of a partisan religious belief acknowledged by a Supreme Court nominee that is outside the mainstream of popular opinion and practice, which would harness state law to church doctrine.

It was the scion of a prominent Roman Catholic family, John F. Kennedy, who assured an audience of Protestant ministers during his 1960 presidential campaign that he believed “in an America where the separation of church and state is absolute. . . . where no church or church school is granted any public funds or political preference.” He declared that he believed in an America “where no religious body seeks to impose its will directly or indirectly upon the general populace or the public acts of its officials.”

Throughout the 20th century, and to this very day, our political leaders of the Roman Catholic faith, from New York Governor Mario Cuomo, who was personally opposed to abortion but pro-choice on the issue, to current Senators Dick Durban of Illinois and Kirsten Gillibrand of New York, have all respected the wall between church and state. Up to and including Joseph Biden Jr. Even Biden’s sharpest critics have not questioned his religion as a reason for opposing his bid. Why then raise this with Judge Barrett? Clearly, it is not her religion but her ideology that excites her advocates and concerns her detractors.

Despite all the revisionist cherry-picking, our Founding Fathers were children of the Enlightenment who abhorred anything redolent of a state religion. For them, faith was a private matter and they were committed to keeping religious dogma out of political rule. Some were Deists forswearing a single denomination. Others, such as Washington, Benjamin Franklin and James Monroe, together with a score of signers of the Declaration of Independence, were Masons, anathema to the Catholic Church. It was only a later generation in the early years of the 19th century that embraced religious revivalism. But the Framers were men of the Age of Reason, rationalists who, for the most part, looked askance at religious influence in state affairs.

Should Judge Barrett ascend to the bench and Roe eventually be overturned, individual states would be permitted to decide whether to ban abortion outright. This would be an ironic throwback to the early years of the Republic when state-supported religion persisted in New England for the first two decades of the 19th century, continuing in Massachusetts until 1833.

Indeed, America had religious roots, but the Calvinism of its Puritan fathers with its strictures on personal liberties is not a model to which most of us might wish to return. The inroads of “militant secularists,” that Attorney General William Barr decries, provide a bulwark for those liberties.

By contrast, the conservative appropriation of religious freedom is little more than coercion tricked up in libertarian guise. A misalliance of the religious right — Evangelicals, Catholic conservatives, ultra-Orthodox Jews — has fashioned a condominium of mutual interest that, under the guise of religious liberty, seeks to impose its dogmatic nostrums on the majority of Americans.

George Washington’s letter to Newport’s Touro Synagogue, a founding document of Jewish emancipation, recognized the equal status of Jews as citizens. Washington’s words emphasized religious liberty in “the exercise of natural rights,” a reminder of the Declaration of Indepedence’s aspiration toward equality, liberty and happiness. In our time, such “natural rights” would extend to a woman’s right to control her own body without state intervention.

Washington’s well-timed 1790 visit to what had been the hold-out state of Rhode Island came during the battle over ratification. What emerged from this struggle was the Bill of Rights, whose First Amendment guaranteed freedom of religion from state coercion. Conservatives have elided this into license to impose one’s religious beliefs on others through state-sanctioned law.

At the current Senate hearings, Republicans have attempted to pose criticism of Judge Barrett’s views as an attack on her religion. GOP Senator Josh Hawley of Missouri has accused her critics of religious bigotry. That his state has imposed some of the most draconian restrictions on abortion and would criminalize it if Roe were overturned speaks to Senator Hawley’s commitment to tolerance. This could bring Missouri back to the pre-Roe days where women who could not afford to leave their homes, their jobs, or the state, or access abortive drugs, would be reduced to the dark era of back-alley abortions and the death and suffering that accompanied them. It is hard to believe that depriving women of rights already granted would be effected without significant social turmoil.

In striving to frame Democratic opposition to Judge Barrett’s anti-abortion ideology as an attack on her faith, Senator Hawley ignores the fact that many of her co-religionists support a woman’s right to terminate a pregnancy. Indeed, Ireland voted overwhelmingly to legalize abortion, which would hardly make it anti-Catholic.

Judge Barrett holds a sincere conviction that life begins at conception. Her private religious beliefs should be treated with respect. But so should the beliefs of those who disagree with her. And when her personal religious doctrine deprives those others — a majority of Americans as polls clearly indicate — from exercising their rights, then opposing her nomination is a valid and necessary defense of personal freedom against the encroachment of a powerful, doctrinaire movement. Senator Hawley’s display of umbrage on Judge Barrett’s behalf is a predictable response from someone who has led the charge to end abortion rights in his home state.

But Rabbi Soloveichik’s support gives special moral weight to this stance. He has written that “an examination of a nominee’s faith is a profound danger to America’s exceptional legacy of religious liberty.” However, with all due respect, it is not Judge Barrett’s faith that is under examination, but her beliefs as they impinge on the freedom of others, which posit the real threat to American liberties. If fulfilled as judicial writ, they pose a clear and present danger at a moment when our democracy faces a challenge to its very existence.