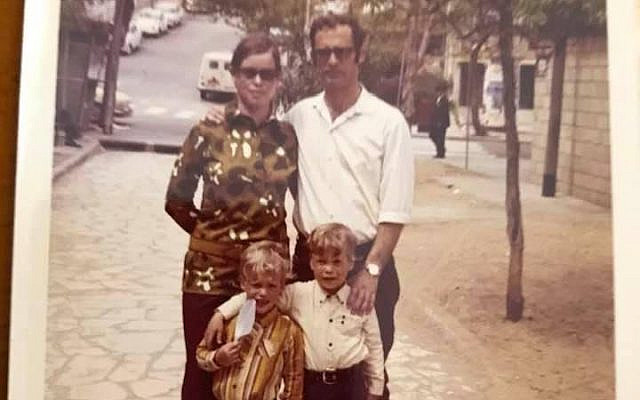 On a weekday morning in 1977, our father woke us up saying, “You’re skipping school today.” My brother Sha’ron and I examined each other from across the room. Was one of us sick? As far as we knew, that was the only legitimate way to play hooky. Sensing no hand on our forehead, seeing no thermometer in our Abba’s hands, and hearing him declare the start of a “day full of fun,” we exchanged surprised looks.

We had no idea this was possible.

As we drove from our small village of Kfar Ganim to the giant metropolis of Tel Aviv, Sha’ron and I speculated about our Abba’s plans. All we could come up with were a visit to one of the ice-cream parlors that dotted the city like Starbucks-forerunners. But after our dad parked our Fiat 128 at an open-air garage (we’d only driven past them before!), we went to a kiosk to buy egg sandwiches. We had no idea you could pick up breakfast on the street!

Our Abba’s expert urban navigation puzzled us. We had not yet learned he was born and raised in Tel Aviv. When he was our age, he stood on his Russian parents’ balcony watching Egyptian Dakotas bomb the city during the 1948-49 Arab-Israeli War. After completing his military service, he joined IBM as a mainframe engineer. He worked there until we moved to the United States in 1980.

Three years before we flew off to New York, on that crisp spring day in Tel Aviv, we went to the shore to eat the aforementioned breakfast sandwiches. It never occurred to us that we could hang out at the beach during the off-season. Apparently, others held the same notion. Ha’chof, a summertime beehive, stood empty. We removed our shoes and socks and ran wild. The waves made the bottom of our pants soggy and sandy. Now I’ll surprise you, dear reader, a little bit, too: I’m not just talking about Sha’ron and me.

Afterwards, our Abba took us to the Museum of the Jewish People, where we discovered that Jews live all over the world. Sha’ron, who at 8 was a year younger than I was, found this mind-blowing. All right, I’ll admit it: I did too.

Our Abba then arranged for lunch at an Eastern European restaurant that served some of the food that appeared in several of the museum’s photos. My brother and I expected the dishes to be bland and boring. Boy, were we wrong! Sha’ron had the blintzes, Abba had the borscht, and I had the brisket. They were the best cheese crepes, beet soup, and braised beef we’ve ever had!

But none of these revelations prepared us for the main event: a special screening of a brand-new Hollywood movie. Greeting us at the cinema doors were characters from the film. They looked like nothing we’d ever seen, yet they were instantly familiar. Inside, we received free buckets of popcorn and handfuls of candies. A man in a suit introduced the film, saying this may be the first and last time it will be shown in Israel. The lights dimmed, the packed crowd of lucky kids stopped yammering, the projector ran, and Sha’ron and I got lost in the story. We’re pretty sure our Abba did, too.

This will probably not surprise you, dear reader: We became lifelong “Star Wars” fans.

As we wrapped up our Day of Astonishment, our Abba managed to awe us even in the most anticipated venue: the ice-cream parlor. Sha’ron and I ordered our usual all-out sundaes. But whatever our father whispered in the waitress’s ears made her bring them out on top of hot waffles!

They were called American Waffles and they elevated ice cream to a stunning level!

The other day, one of my twin 3-year-old boys told me he loved me. I asked why (I should really begin leaving well enough alone). He answered in his little-yet-self-assured voice, “Because you give us so much surprises.”

That’s because I learned from the best.

And I still have a long way to go to match my Abba.