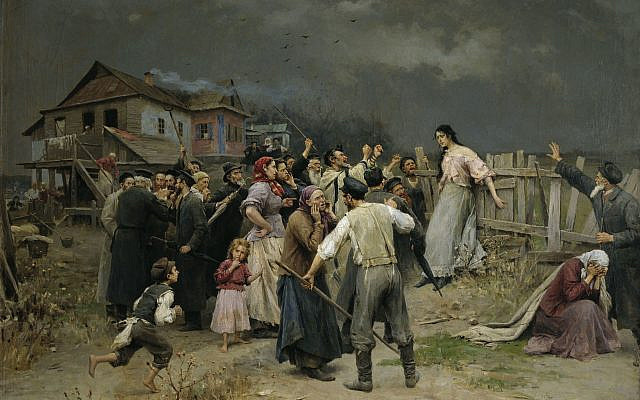 A Victim of Fanaticism by Nikolai Pimonenko (1899) Wikipedia (Public domain)

During my life time, I’ve been in a few pickles.

So when I read that Seth Rogan starred in an HBO movie, called, “An American Pickle” I pondered, “What would this film be about?”

I thought, “A film about some American Jews who kept their mouths shut, from 1933 until December 7, 1941, while their brethren were being beaten, raped and murdered at the hands of the Nazis and their collaborators?”

You may ask, “Why were they silent?”

Because they were in a pickle.

They feared rising anti-Semitism in the States if they supported European Jewry.

They lived in this “self-interest pickle” where their self-interests were way more important than the lives of others.

Their mantra, “Why take the risks? It’s not my problem.”

Then I wondered, “Would the film be about the J Street crowd?”

A bunch of American Jews that only support Israel half-heartedly.

You may ask, “Why half-heartedly?”

Because they’re in a pickle.

If they fully support Israel other Americans may think they have dual loyalties.

And everyone knows having dual loyalties makes you less of an American.

Finally, I wondered, “Would the film be about Seth Rogan downgrading the thought that Israel is a safety net for diaspora Jews or questioning the right of Jews to have a homeland.”

You may ask, “Why would a Jew say such dreck?”

Because he was in a pickle.

How do you get some buzz for your movie during a pandemic?

Say some crap that will take wings on the web.

I pictured Seth’s mother calling him up right after the uproar.

“Of course Mom, take as long as you need.”

“Well son, you’ve gotten yourself and me into a real pickle.”

“Mom, tell me something I don’t know.”

Well, you don’t know the names people are calling me to my face.

You don’t know that at the temple, I hear them whispering, “She’s the mother of the idiot!”

They point their fingers in my face and say,”When is your son going to apologize to the State of Israel?”

Seth, you have made me a victim of fanaticism.

Last night, I went to bed crying and I couldn’t fall asleep.

Son, please, I beg you  to clean up this mess.”

“Well this is what I recommend. Listen carefully. Have you got a pencil and a piece of paper so you can take notes.”

“Hold on Mom, I getting a pen and a piece of paper.”

“Here’s what you’re going to do.

First, get on your knees and pray to G-d for forgiveness;

Second, you’re going to get on that iPhone I bought you for Hanukkah;

call some big Jewish muckety-muck, preferably one that you gave some donations to.”

“Mom, I haven’t given any donations to any big Jewish muckety-mucks.”

“Then call your agent. He’ll hook you up with a name and number.”

Third, tell the muckety-muck, “I’m sorry for the stupidity that flowed out of my mouth.”

I apologize for what I said and I won’t ever say it again.

I have learned my lesson.”

Seth, have you written this down?

Son, I’m not an expert on PR but when it comes to getting out of pickles, I know a thing or two.

Call me after you talked to the muckety-muck and to tell me how it went.

Seth, remember if you don’t follow my advice you’ll live to regret it.”

“Thanks for the advice, Mom.

And who said, Jewish mothers aren’t the best?