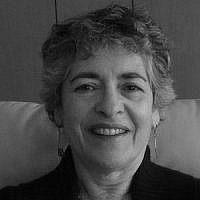 The Blogs
Ilana Kraus
Apply for a Blog
Please note that the posts on The Blogs are contributed by third parties. The opinions, facts and any media content in them are presented solely by the authors, and neither The Times of Israel nor its partners assume any responsibility for them. Please contact us in case of abuse. In case of abuse,
Report this post.

On Tisha b’Av, when many Jews visit the Kotel, I was reminded of my first encounter with this remnant of the Second Temple whose destruction we mark on that day, along with that of the previous Temple, and many other calamities that have befallen our nation. In July 1969, I felt awed, but welcomed, embraced by the ancient stones and what they symbolized to me, the millennia-long chain of Jewish continuity. I felt that its stones were reaching out to me and connecting me to that chain. Today, I feel that they are reaching out to push me away. I feel estranged, like an unwanted guest in a place where I do not belong. The place that once spelled Jewish peoplehood has become an exclusive club, an ultra-Orthodox synagogue rather than a symbol of national continuity.

On Tisha b’Av, everyone talks about sinat hinam, senseless hatred, since, according to the Talmudic sages, this is what lead to the destruction of the Temple and our exile from Eretz Yisrael. Nothing symbolizes this senseless hatred more than the actions of our government during the past month in regard to the Kotel, the proposed conversion law and the “blacklist” of rabbis, the discussion surrounding creeping religionization in the public sphere, and many more matters related to the issue of religion and state. The antidote to senseless hatred, we are told, is ahavat hinam, but “senseless love” does not make sense to me. Hatred is very often senseless, baseless, but love should never be that. I believe that the opposite of sinat hinam is the love of Klal Yisrael embodied in the watchword that has kept us together as a nation throughout our wanderings: Kol Yisrael Areivim Zeh LaZeh.

Rather than working for the good of Klal Yisrael, as one might expect from those who claim to uphold Jewish tradition, and the government of the Jewish state, they have inflicted a resounding slap in the face of Jewish peoplehood. Granted that the leaders of the Haredi parties have the power to roll back legislation and understandings achieved with much compromise and hard work, not only in the matter of the Western Wall and the proposed conversion bill, but also, legislation that would actually have helped their constituency become a productive part of mainstream Israeli society – core curriculum studies and military service. Yet, they have not only gloated over these Pyrrhic victories, which have estranged so many in Israel and abroad, but also undermined the strength of the Jewish people, which is also a strategic concern for the state of Israel: the knowledge that we are all brothers, Kol Yisrael Areivim Zeh Lazeh.

To the Haredi parties, I would say, don’t push these issues just because you can. To the other political parties, I would say, make religious freedom, recognition of Jewish pluralism in the Jewish state part of your platforms. Make it clear that democracy should supersede theocracy, that the Jewish character of the Jewish state cannot be legislated or dominated by one stream of Jewish practice to the exclusion of others. To secular Jewish Israelis, I would say, retake your Jewish heritage. Teach it to your children in the way you want them to know about what has kept our nation going for thousands of years. Fight for issues such as civil marriage. As to the Western Wall, I would say, make it place that symbolizes Klal Yisrael, a place where Jews of every stripe feel welcome to pray (or not to pray) as they see fit, a place that every Jew can relate to as a symbol of Jewish continuity and strength.

About the Author
Ilana Kraus has been living in Israel for forty years. A translator, editor, and journalist, Ilana has in recent years has begun writing fiction as well as opinion pieces.
Related Topics
Related Posts
Comments