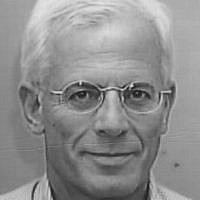 The Blogs
Amiram Goldblum
Apply for a Blog
Advertisement
Please note that the posts on The Blogs are contributed by third parties. The opinions, facts and any media content in them are presented solely by the authors, and neither The Times of Israel nor its partners assume any responsibility for them. Please contact us in case of abuse. In case of abuse,
Report this post. 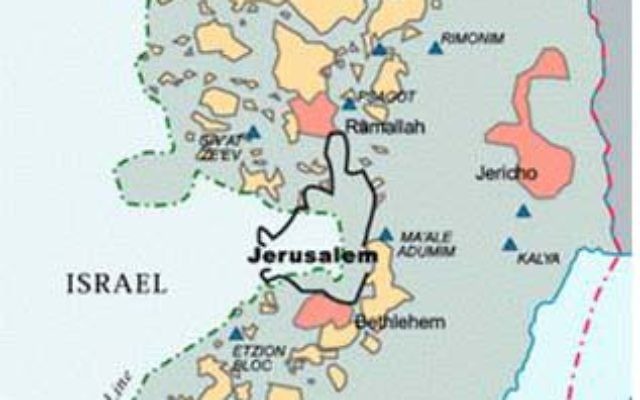 Based on the outdated Oslo II agreement, Palestinians areas A(pink) and B(yellow) are totally surrounded by Israeli controlled area C(grey), making 60% of the West Bank

We all hope to soon be witnessing a quiet period of “6 after the war” following an agreement that is currently “cooked” in Cairo. That terrible war in Gaza, in which we killed hundreds of civilians and lost 64 of our IDF soldiers, will soon have to be investigated and its “success” will be questioned. Currently, it is a war without winners, as all sides have lost. Gaza has been continuously “occupied” by Israel after the dismantling of the settlements. That is clear from the current discussions in Cairo, where demands to lift the Israeli and Egyptian curfew on Gaza are the main focus. In any jail, the inmates are free to move but only within limited space. That is the situation of the inhabitants of Gaza today, even though the settlers in Gaza, the “internal” jailers, have been removed. Those settlers are the source of enormous difference between the two Palestinian regions – the West Bank with its 2.5 million Palestinians plus 350 thousand settlers, and Gaza with 1.8 million Palestinians only.

Israel is not an apartheid state, but it runs an apartheid regime beyond the “green line”, which was the border between Israel and Jordan’s West Bank (WB) until June 4, 1967. The facts are crystal clear: Jewish settlers and Palestinians live in that area under two widely different legal systems. Jews are subject to a civil administration and Palestinians are subject to a military one. Most of the 2.5 million Palestinians are restricted to some 220 “Palestinostans” (Similar to the dozen “bantustans” in apartheid South Africa, also called “homelands” to clarify that this is those are the homes of the black people). These were called “area A” (full Palestinian security control of the main cities) and “area B” (Palestinian civilian control, mutual Israeli-Palestinian security – which deteriorated in the intifada of 2000) by the Oslo agreement. Those are 220 islands of Palestinian existence, each of them fully surrounded by the IDF fully controlled “area C”. The Oslo agreement was put together as an interim solution for 5 years, but remains unchanged ever since. Palestinian individuals moving between their “homelands” are controlled and monitored by the IDF. Water is in full Israeli control. The Jewish settlers, who constitute 15% of the total population are in charge of 60% of the total ~2120 square miles (~5500 sq. km.) of the WB. Some 150-300 thousand Palestinians live in the settler’s controlled area C, with some 350 thousand settlers. Many of the Palestinians in the Jordan valley and in the south part of the Hebron mountain range are pushed out of their homes by the combined pressures and “convincing” of the settlers and the IDF, frequently at the point of a gun. The focal point of apartheid in the West Bank is the city of Hebron, where some 1000 settlers and IDF personnel control the lives of 40 thousand Palestinians in the “area C” part of Hebron, called H2. Hebron’s H2 is the apartheid capital of the WB, where only settlers enjoy the Israeli laws and voting rights, while the annexed East Jerusalem, where 300 thousand Palestinians are devoid of civil rights despite the annexation, became a major source of manual work for the Jewish parts of Jerusalem. Practical apartheid is prominent in Arab Jerusalem, and is propelled by some prominent members of the municipality of Jerusalem, in fact, the first members to sign the coalition agreement with mayor Nir Barkat.

Israel did not accept the application of the Geneva and Hague agreements to its occupation of the WB. Thus, in a recent incident, an IDF officer becomes involved in a settlers’ attempt to cause harm to Palestinians property, and snaps at some Israelis who came to be witnesses of the event, calling them “traitors” and declaring that his role is only to protect settlers, not Palestinians.

Those who oppose the use of the “A” word to describe the situation in the WB claim that ingredients of South African apartheid are not found in the West Bank. This is a typical claim by many South Africans, who are very well acquainted with the SA apartheid, which was based on institutionalized racism, while the Rome convention had already extended the term to other types of institutionalized separation. Indeed, no racism is exercised in the WB. Also, one does not find any “Palestinians not allowed” notices, and there are no road-signs directing Arabs to special routes. This is simply because things are so clear that there is no need for such signs; they have been replaced by IDF roadblocks, by gun-toting soldiers, or by piles of sand and rubble placed to block passage of Palestinians to the main roads. The main roads are not officially “for Jews only”, but a Palestinian must spend some 10-15 additional minutes on the grand detour of several kilometers to get to that road. And then, of course, there are the checkpoints, in which only Palestinians are searched and detained, while Jews need only say a word in order to be identified as such. Indeed part of the system is “security”, but so much of the apartheid is not. Still, many roads to settlements are closed for Palestinians, there are separate bus lines for settlers and for Palestinians, and water is distributed with huge preference to the settlers.

In Hebron, the apartheid capital, all of this is much more visible: a divided road leads to the cave of the Patriarchs, Palestinian property is taken over by Jews, who are supported by the IDF, and the supreme court legalizes “taking back” property from before the 1929 massacre in Hebron, or the 1949 cease fire agreement, solely on the basis that it once belonged to Jews. There is not even a single case of the reverse.

Apartheid has both soft and hard faces. The “Only for Whites” signs in South Africa were an expression of soft apartheid. The hard core apartheid included residence limitation to “homelands” and restrictions on movement. These are more than adopted, lock stock and barrel, by the Israeli regime on the WB. The use of land for construction and water for agriculture is limited for Palestinians and so is their movement between the 220 “Palestinostans”, 20 times more “homelands” than the number of Bantustans of South African apartheid, and on a truly tiny piece of land. These restrictions are the main ingredients of the present day hard core apartheid on the WB.

Israel claims that the “homelands” were part of the Oslo agreement of 1993. They were, indeed, just a temporary vehicle to form the “Palestinian authority” that should have extended its control over all or most of the WB in further negotiations. But since Palestinian police and Palestinian officials cannot move freely between those “homelands”, what kind of control can the Palestinian authority have? If a Palestinian villager has to be controlled by the IDF while moving to another “Palestinostan” for market day, or for studies, or for work, always through areas controlled by the IDF and the settlers, what meaning does “authority controlled areas” mean ? The recent search for the kidnappers-murderers of the 3 Yeshiva boys demonstrated that Israel can enter all those “Palestinostans” at will, invade any of the homelands in order to search and arrest , even when no “hot pursuit” is claimed. (This term was used in the Oslo agreements to allow the IDF to search suspects who plan terror actions inside Israel; these days, by the way, after the construction of the separation wall, this is hardly needed.)

It is impossible to claim that Israel’s occupation of the West Bank is temporary, after nearly 50 years of occupation and the massive construction of Jewish settlements. The accusation of apartheid in the WB has a clear and broad basis. Apartheid is defined as “a crime against humanity and this includes the perpetrators of that crime, those who live there and those who support them in Israel. If terror is defined as the intention to frighten and repress political groups, with or without violence, then the numerous Palestinians in the WB are constantly threatened by the combination of settlers and IDF. According to Wikipedia, “Terror…. is practiced by governments and law enforcement officials, usually within the legal framework of the state…”. This clearly applies to the Israeli regime on the WB. That unique combination of terror and apartheid is exposed to the world and, unless ended, will cause more criticism, de-legitimization and isolation of Israel. It might lead to sanctions against prominent Israelis, similarly to what was recently announced against Russian officials who supported the annexation of the Crimea. Those who cannot differentiate between the apartheid in the WB and the democratic state of Israel might direct their anger against any Israeli, not only those who terrorize the Palestinians, and perhaps even against Jews anywhere. Thus, the apartheid in the West Bank endangers millions of Jews and Israelis, and must end. But how?

Contrary to South Africa, where the only solution was a binational state, Israelis and Palestinians can still separate to form two side-by-side States. The current atmosphere after the failure of the recent Peace talks and the war in Gaza, which continues as we talk, does not seem to allow for reaching a final status solution now. There are other steps, of interim nature, which could be agreed upon quietly between Netanyahu and Abu Mazen. My next blog will present examples of these in some detail. Their main advantage would be to change the situation on the ground so that the apartheid and terror accusations may be eliminated. 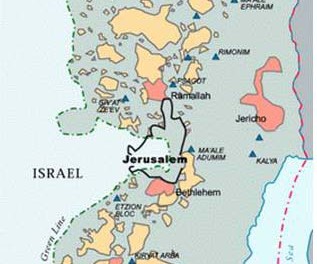 Based on the outdated Oslo II agreement, Palestinians areas A(pink) and B(yellow) are totally surrounded by Israeli controlled area C(grey), comprising 60% of the West Bank
About the Author
Amiram Goldblum studied Chemistry and Physics and received his PhD in Medicinal Chemistry, then moved to theoretical Biochemstry and algorithmic developmen and is currently a full professor at teh Hebrew University. During the 70s he was a news announcer and music program anchor in Kol Yisrael. He plays the piano and is on the academic board of the Israel Academy of Music. He served as a military commander for many years and participated in the 73 war in the city of Suez. Professor Amiram Goldblum is one of the founders of the new Israeli NGO "Shivion - The Organization for the Prevention of Racism and Apartheid in Israel”. He was the spokesperson for Peace Now between 1980 and 2000, and the founder of the "Settlements Watch" operation of Peace Now in 1990.
Related Topics
Related Posts
Comments